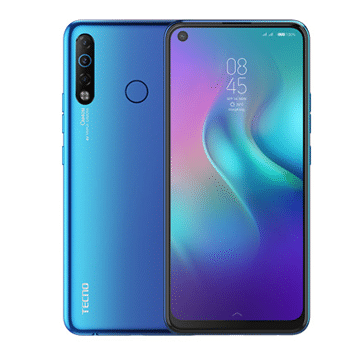 Hong Kong-based Transsion Holding’s sub-brand, Tecno Mobile, has been pretty prolific in launching affordable smartphones in India. The latest offering from the company is the Tecno CAMON 12 Air. The smartphone is priced at INR9,999 and is touted for offering a hole-punch display (which the company terms as “Dot-in-Display”) for the first time under the INR10,000 price bracket.

The smartphone also has triple rear cameras, Android 10, and a 4,000mAh battery to justify its price tag. The smartphone will be available via offline channels in two color options, such as Bay Blue and Stellar Purple.

Talking about the full spec sheet of the Tecno CAMON 12 Air, it includes a 6.5-inch HD+ display with a 20:9 aspect ratio and 90.3% screen-to-body-ratio. The smartphone has a punch-hole display similar to what we have seen in the Vivo Z1 Pro, which is, however, pricier than the Tecno CAMON 12 Air.

Under the hood, the smartphone is powered by a MediaTek Helio P22 SoC, which also finds a place in the likes of the Realme C2 and the Redmi 6. The chipset is mated to 4GB RAM and 64GB built-in storage which can be expanded further up to 256GB using a microSD card via a dedicated slot. 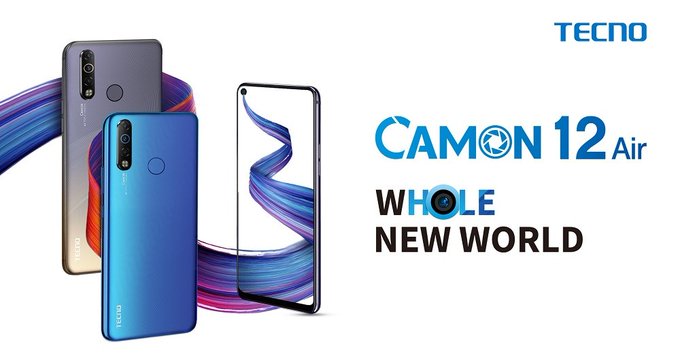 Although a mediocre processor drives it, the CAMON 12 Air tries to make up in the camera department as it tacks on a triple-rear-camera setup. The setup includes a 16MP f/1.8 primary sensor, a 2MP depth sensor, and a 5MP wide-angle sensor with a 120-degree field of view. Upfront, an 8MP f/2.0 selfie shooter with an 81-degree wide-angle lens lies lurking inside the hole-punch cutout.

On the software side of things, the Tecno CAMON 12 Air boots HiOS 5.5 on top of Android 10 out-of-the-box. A 4,000mAh battery rated to last 12 hours of video playback fuels the device. Tecno didn’t specify if the battery also supports fast charging.

Other notable stuff includes 4G VoLTE, Wi-Fi, Bluetooth 5.0, GPS, 3.5mm headphone jack. The phone has a face unlock feature, but it chiefly depends on a rear-mounted fingerprint scanner, which can unlock the phone in quick 0.27 seconds.

If we consider the price, the Tecno CAMON 12 Air will battle against the likes of the Redmi Note 7S, the Realme 5, the Motorola One Macro, etc. However, its rivals pack a better processor under the hood.