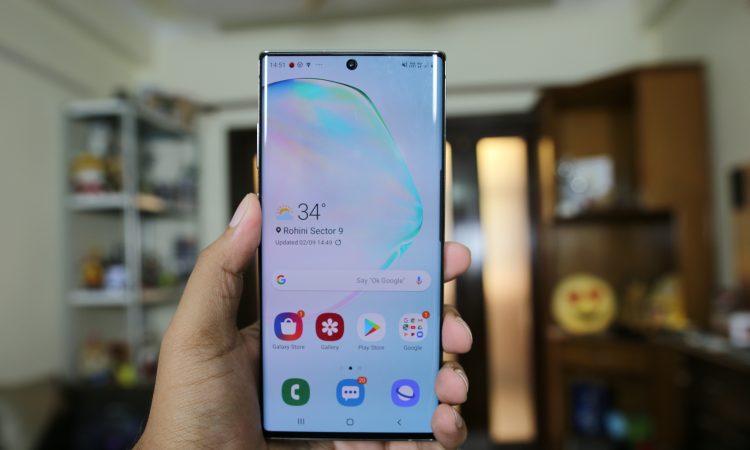 `When it comes to Flagship Devices, Samsung is one of the most popular Mobile Brands out there which comes out with some of the best Flagship devices. Surely not all of them turned out to be successful, but we still cannot deny the fact that the Flagship Devices from Samsung always brings something new to the table.

Well, we have already seen the Galaxy S10 which the company launched this year. But now, the company has also revealed their next Flagship addition to their quite so hot yet popular series, the Samsung Galaxy Note.

The company has just launched their Samsung Galaxy Note 10 Plus in the Indian Markets and a lot of people out there are looking forward to deciding whether they should buy this device or not.

Today, in this post, we would be reviewing the Samsung Galaxy Note 10+ and would be sharing our thoughts on this device. Now if that sounds interesting, let us top into it.

The sides are built out of aluminium, the back is built out of metal and is covered with the Glass panel which looks stunning. Talking about the back panel, it does attract a lot of fingerprints which can be prevented by putting on a clear case which Samsung has included inside the box. 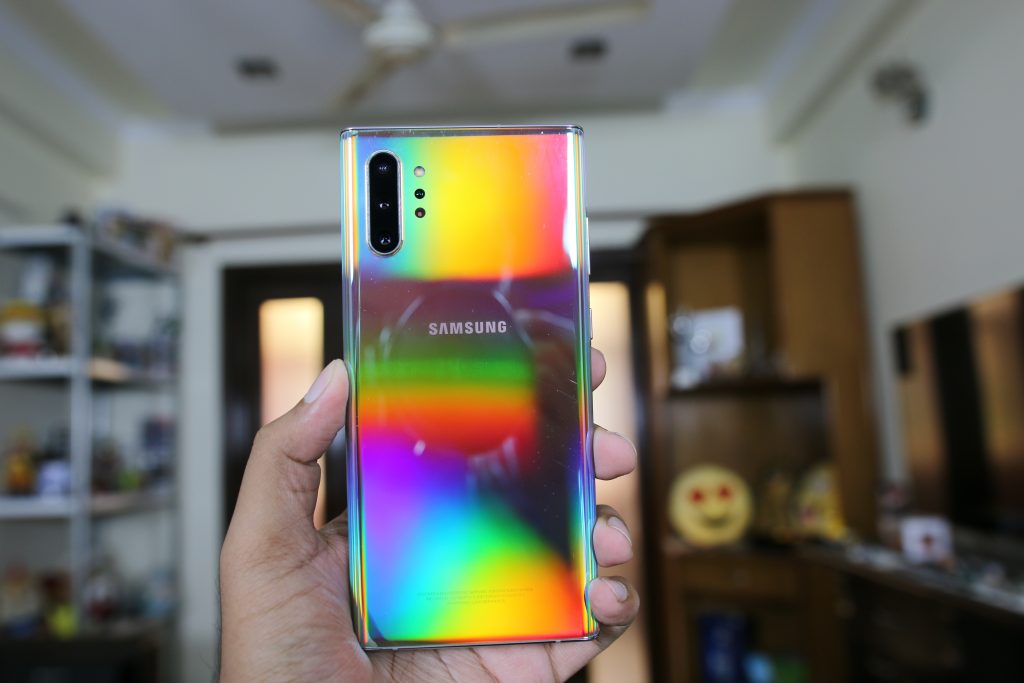 All the buttons are to the left of the device. Also, the Power Button doubles as the Bixby button. Now, by default, holding down the power key will start Bixby, but you can change that in the settings app.

Overall, the device looks and feels very rugged and premium. There is a punch hole camera design for the selfie camera on this flagship device which looks good. One of the major attractions is the almost bezel-less design of the Note 10+.

There are very thin bezels around the display which make it look almost like a just Screen smartphone. Anyways, to wrap the Design and Build section, we would say that the Note 10+ looks absolutely gorgeous and has quite a solid build.

The Samsung Galaxy Note 10+ has a huge 6.8-inch Display which is Quad HD. The resolution of this AMOLED display is 1440 pixels which make the display absolutely fantastic. Watching movies on this display can be a treat. The colours look so good. 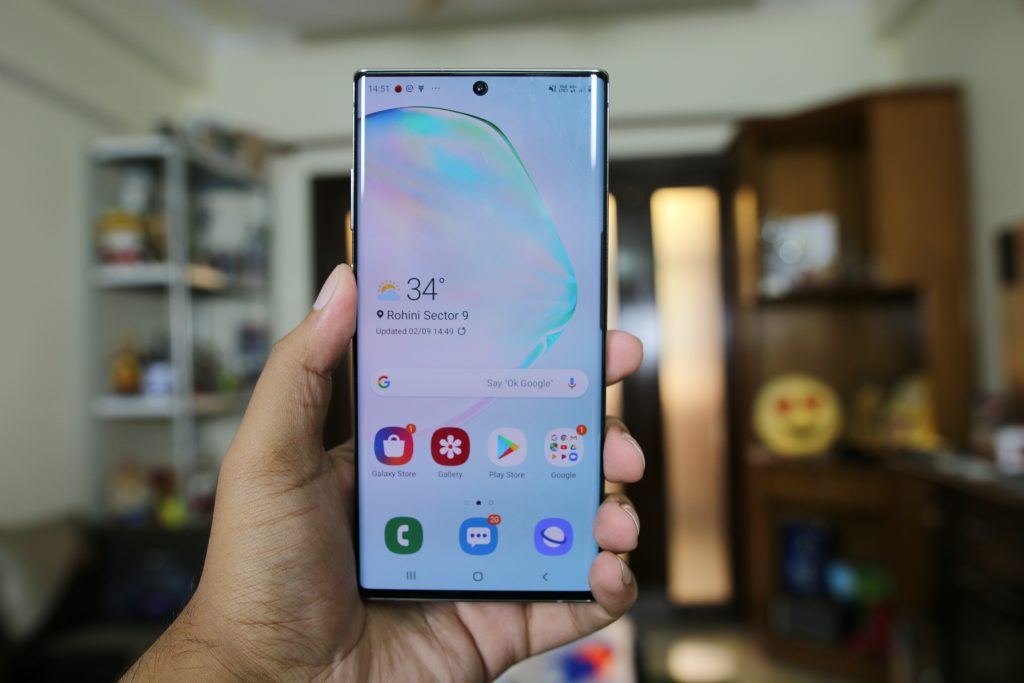 This is one of the best displays we have seen so far on the Samsung Device. Now, this display has a refresh rate of 60 hertz, we were expecting Samsung to bring a higher refresh rate to the table, but the 60 Hertz isn’t bad either. There are very thin bezels on the top and bottom of the display which makes it look even more beautiful. 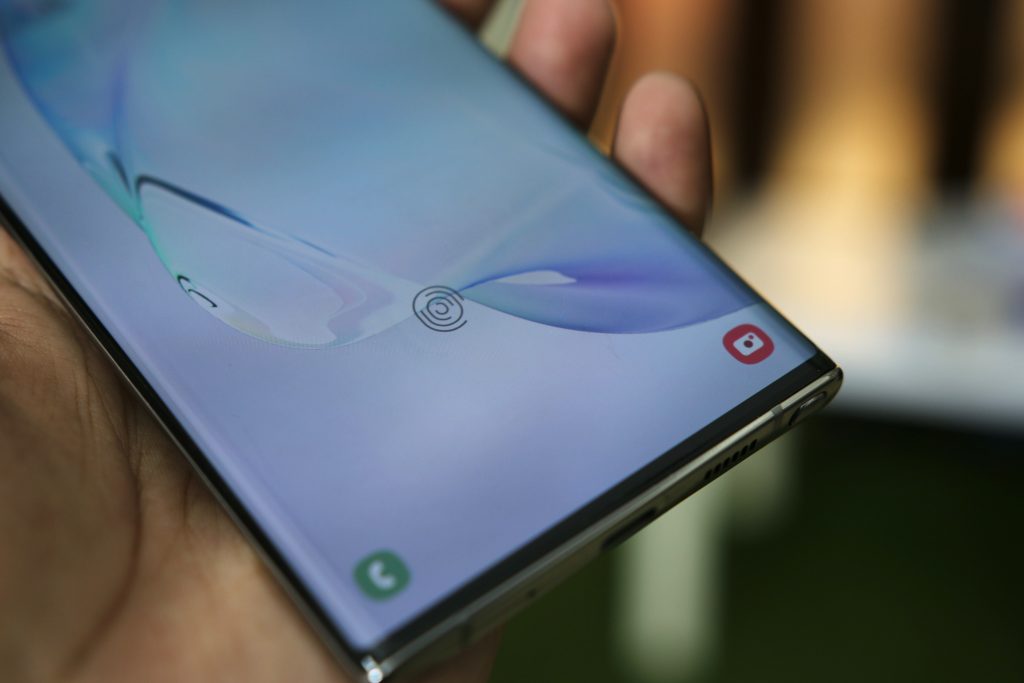 When it comes to display and Unlock options, we have no complaints to the company. They actually did a pretty great job with the display of this flagship Android Device.

The Samsung’s Galaxy Note 10+ is powered by an Exynos 9825 chipset. This is a quad-core processor which is the latest one from the company. The device comes with a massive 12 GB of RAM out of the box.

The combination of Exynos 9825 along with 12 GB of RAM is just powerful enough. Throw any heavy or CPU intensive task at it and the chances are that this combination would be able to handle that task efficiently. Doesn’t matter if you are a heavy gamer or a casual user, the Samsung Galaxy Note 10+ is not going to disappoint you when it comes to the performance. 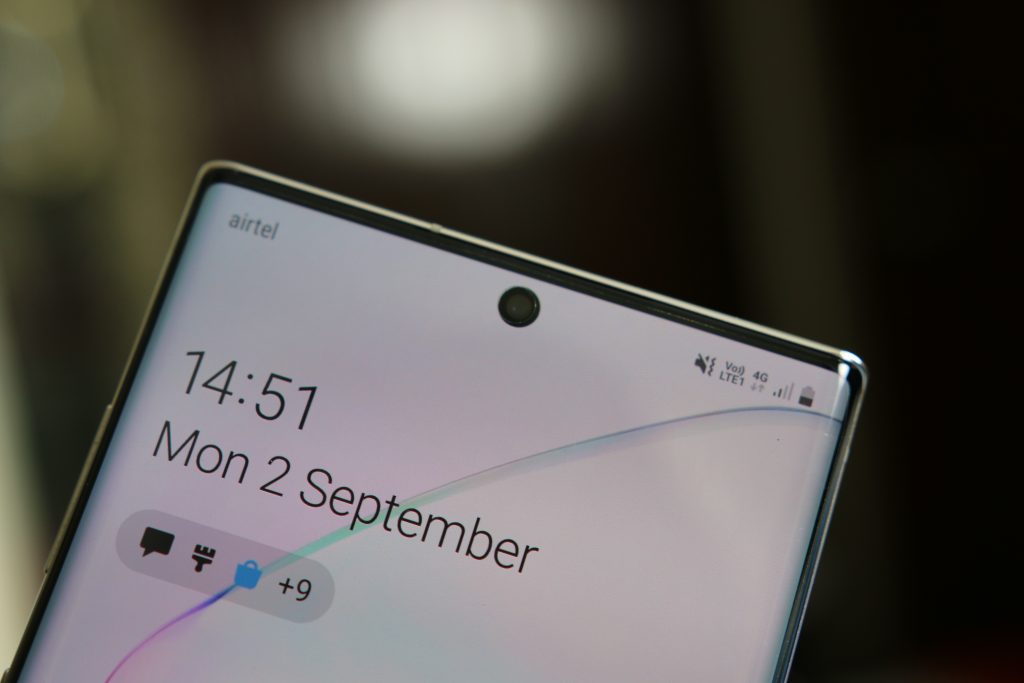 Out of the box, the Samsung Galaxy Note 10+ runs on the latest version of Android, the Android 9.0 Pie. This is based on Samsung’s own custom skin of Android, the One UI. Now, the One UI is pretty reliable and we didn’t find any issues with the software on the Note 10+ while testing things out.

However, we didn’t like the transformation of the power button as the Bixby key. Apart from that, the Software on the device is pretty reliable and the device is a really powerful performer.

Samsung’s Flagship devices are quite popular for their amazing camera setups. Well, this is the case with Samsung’s Galaxy Note 10+ as well. The Device has a quad-camera setup at the rear. This comprises of a 12MP Wide Lens + 12MP Telephoto  + 16MP UltraWide + TOF 3D VGA cameras. Now, this camera does a fantastic job. 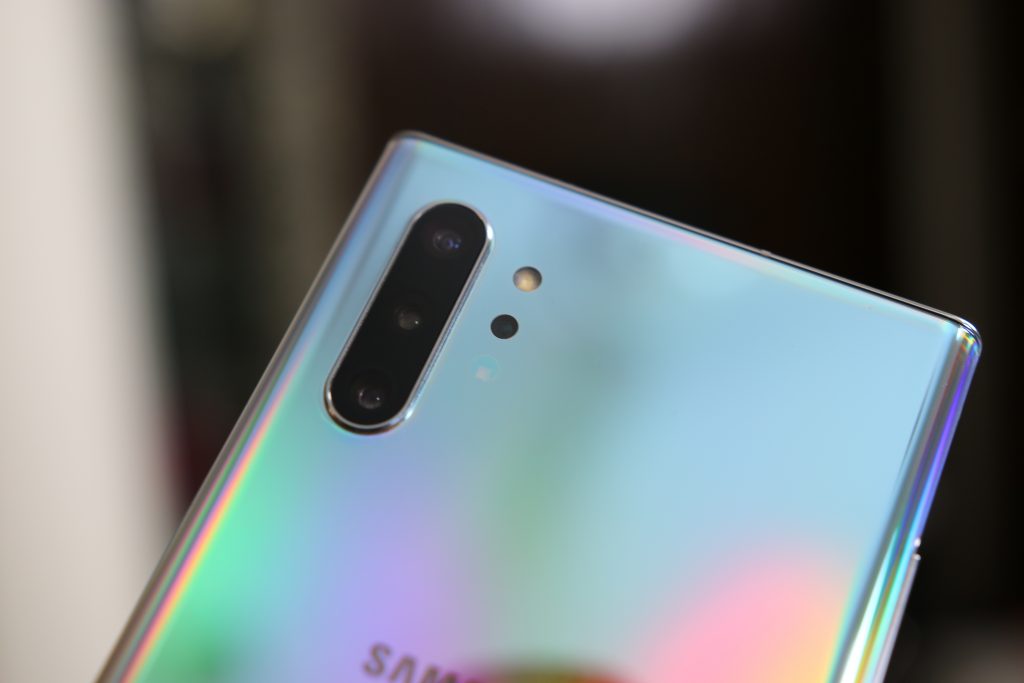 There is a dedicated night mode which works absolutely great. The portrait mode along bokeh effects turned out to be great as well. The videos recorded via this camera setup were quite stable. Samsung also integrated the sound amplification while recording which tries to record only the sound which is coming from the sources in the frame which is a cherry on the top. 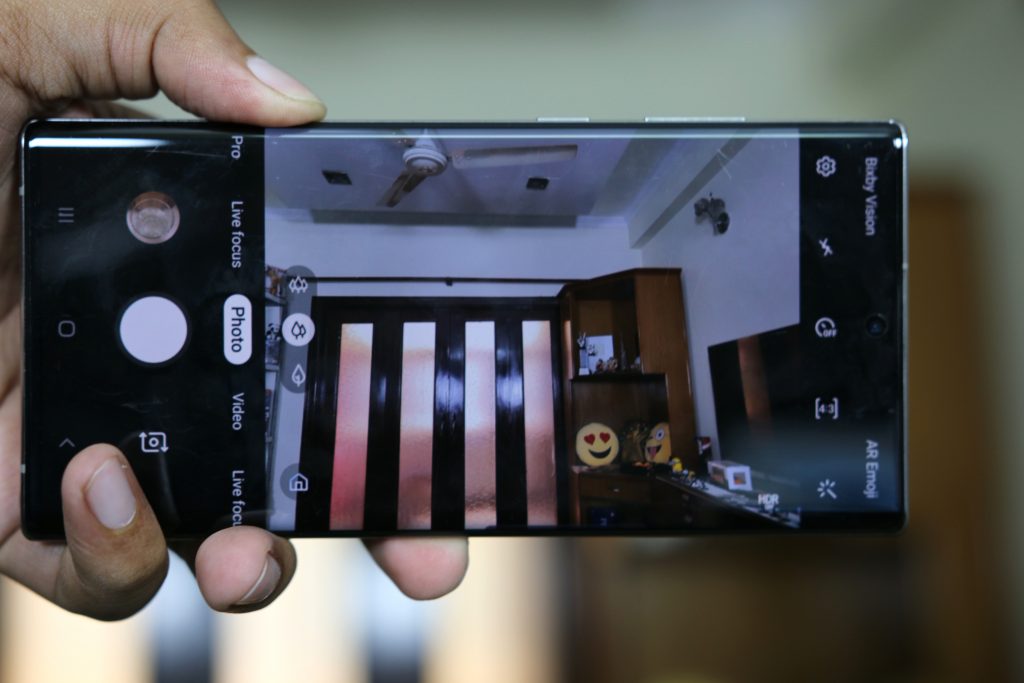 To the front, we can find a 10-megapixel punch-hole design camera for selfies. This camera also performs quite good. Coming to the battery, the Samsung Galaxy Note 10+ comes with a 4300 mAh capacity battery which is quite huge.

Also, this does support a 45W adapter. Though, you only get a 25w adapter in the box which is blazing fast as well. But if you are someone who can spend more for faster charging, then you can always get a 45W charger. 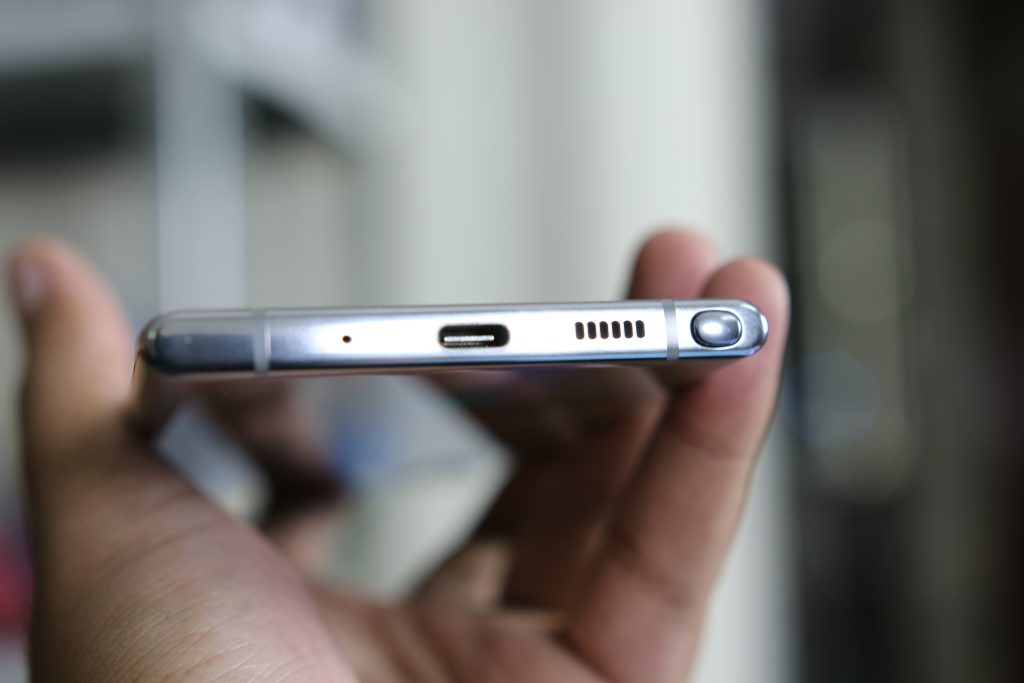 S-Pen has been one of the most major attractions of the Samsung Galaxy Note series of devices. The S-Pen on the Note 10+ is more useful and featureful than it ever was.

One of our personal favourite features of this S-Pen is the ability to take notes while the display is off. Now, once you have taken note, you can go to the Notes app and search for the Text you wrote in your handwriting. Yes, that will work thanks to the OCR which Samsung has implemented with the Note 10+. 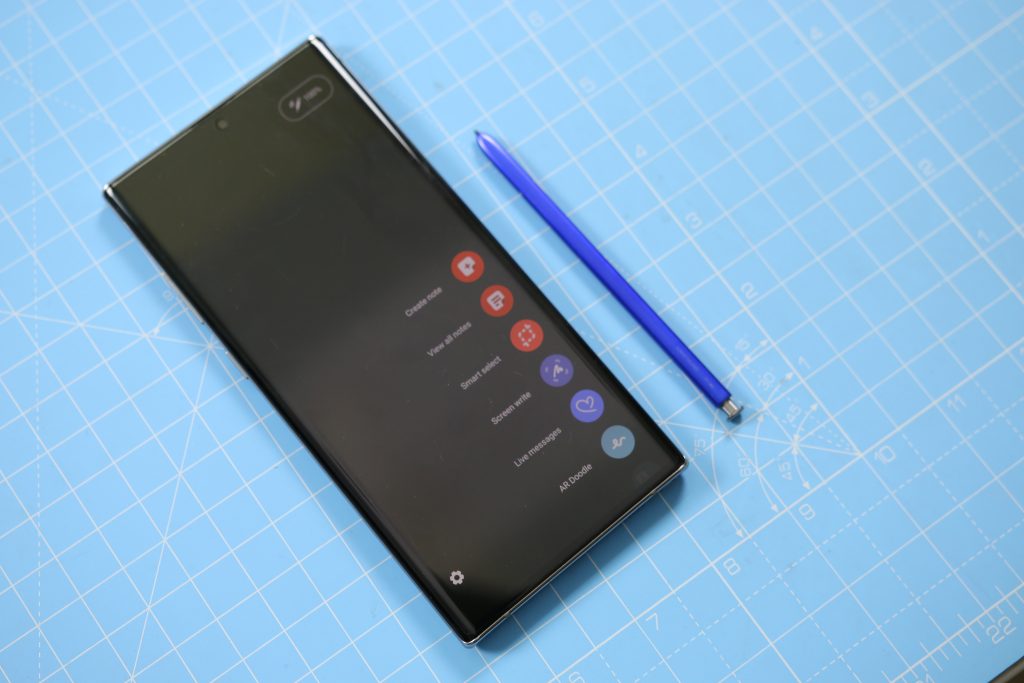 Other than that, the users can also control their camera using the S-Pen gestures. For instance, they can switch between the modes and can even zoom in with this S-Pen.

One can also switch between YouTube videos with this S-Pen. Samsung has also released an SDK version for the developers which will help them make apps which are compatible with the S-Pen.

To conclude this review, we can definitely say that the Samsung Galaxy Note 10+ is an absolutely gorgeous device with great performance, camera and battery. The S-Pen also offers a lot of amazing features.

Now, though the smartphone does not have a 3.5mm Jack, we don’t think that it is a dealbreaker. You also get a pair of USB Type C earphones in the retail unit of the Note 10+.

Anyways, if you are someone who is out there looking for a new flagship device, then you should definitely consider taking a look at the brand new Samsung Galaxy Note 10+.

To conclude this review, we can definitely say that the Samsung Galaxy Note 10+ is an absolutely gorgeous device with great performance, camera and battery.