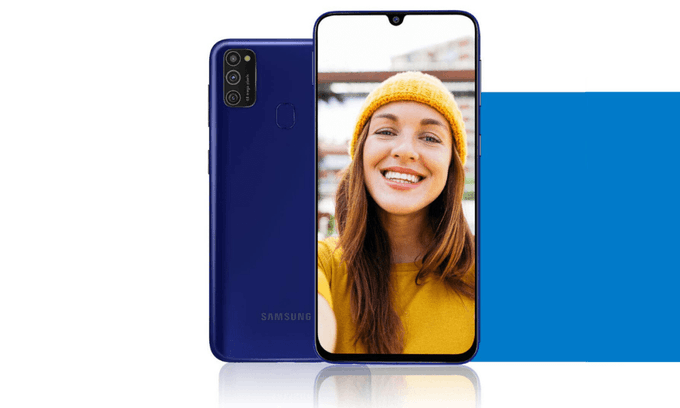 On the heels of listing the upcoming Galaxy A11 on its website Samsung today launched its budget-oriented Galaxy M21, the successor to the Galaxy M20, in the Indian market. Earlier the smartphone was to launch on March 16 but for an unexplained reason, it was pushed back for today.

Packed with a massive 6,000mAh battery, 48MP triple-rear camera, Super AMOLED Infinity-U display the smartphone is geared towards the younger generation, in particular.

The Galaxy M21 is priced at INR12,999 for the 4GB RAM+64GB storage variant. A 6GB RAM+128GB storage variant will also be available for which the pricing is yet to be specified. The smartphone will be sold via Amazon India starting March 23 in Raven Black and Midnight Blue color options.

In terms of specifications, the Galaxy M21 is built around a 6.4-inch FHD+ sAMOLED Infinity-U display with a dew-drop notch in the middle. The display is protected by Gorilla Glass 3 as well as it is Widevine L1 certified for HD streaming. The device flaunts a 91 percent screen-to-body ratio.

Pumping power from under the hood is the 2.3GHz octa-core Exynos 9611 SoC which also drives the likes of the Galaxy A51 and Galaxy M31. The processor works in sync with Mali G-72 MP3 GPU, 4GB/6GB RAM and 64GB/1288GB built-in storage which can be further expanded up to 512GB via a microSD card using a dedicated card slot. On the software end, the Galaxy M21 boots One UI 2 based on Android 10.

The camera is one of the biggest attractions of the device as it features a triple rear camera setup led by a 48MP primary sensor. The sensors are arranged vertically in a rectangular module which also includes an LED flash. Besides the 48MP primary sensor, the setup is comprised of an 8MP 123-degree ultra-wide-angle sensor and a 5MP depth sensor. For a perspective, the predecessor Galaxy M20 makes use of a 12MP dual-rear camera setup only.

On the front, the Galaxy M21 has a 20MP selfie shooter lurking inside the U-shaped notch. The selfie camera has also seen the up-gradation from the 8MP on the Galaxy M20.

Samsung India last month launched low mid-range Galaxy M31 in the country with a price starting at INR15,999 with the same processor and battery pack but wielding better cameras rated at 64MP quad-rear camera array and a 32MP selfie shooter.