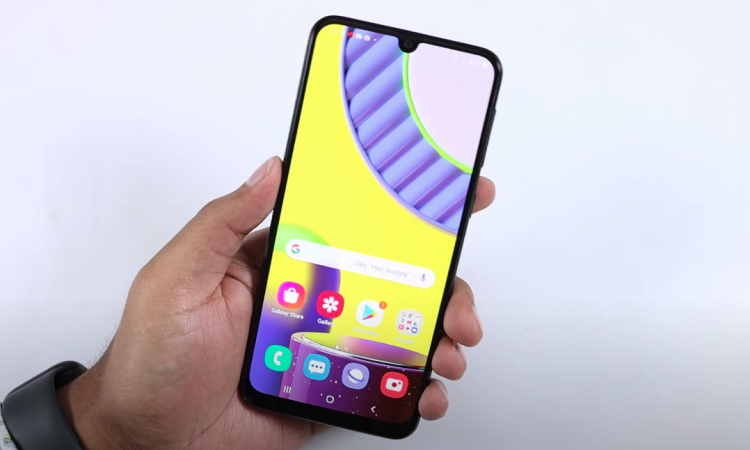 Whether it is flagship level, mid-range, or the budget segment Samsung has a finger in every pie of the smartphone market. While it is the flagship level that gets maximum innovations, Samsung, of late, has gotten serious about its mid-range and budget segment as well especially with an eye on the competition faced by brands like Xiaomi & Realme.

Speaking of the budget segment, in particular, Samsung last year kicked off an all-new M series that focused on better display, big battery, and decent performance. The Galaxy M20, Galaxy M21, Galaxy M30, and Galaxy M30s under this series are some notable offerings that managed to garner lots of attention from the buyers.

The Galaxy M30 and Galaxy M30s, in particular, proved to be lucrative for Samsung with fairly good sales figures. This year, the Galaxy M30 and M30s, have received their natural successor as the Galaxy M31. The latter is marketed as “MegaMonster” device for the reason that it comes with a massive 6,000mAh battery coupled with a big Super AMOLED display and the latest Android 10 software experience.

That apart, the Galaxy M31 packs better camera both on the front and the back if compared to its immediate predecessor, the Galaxy M30s. While the front camera is bumped to 32MP the rear camera setup of the Galaxy M31 adds a fourth sensor which is a 5MP macro sensor along with up-gradation of the primary sensor to 64MP from 48MP.

Well the Galaxy M31, in sub-INR15,000 category, with the so much specs to offer can instantly pique anybody’s interest. But does the device holds to its promise in real-life use? We will find out in this review article. However, before we jump into the full-on review let the pricing and also what we get inside the box out of the way first.

The Galaxy M31 comes in two variants. The base variant with 6GB RAM+64GB storage configuration is priced at INR 14,999 while the 6GB RAM+128GB storage variant costs INR15,999. You can choose between Ocean Blue and Space Black colour options. 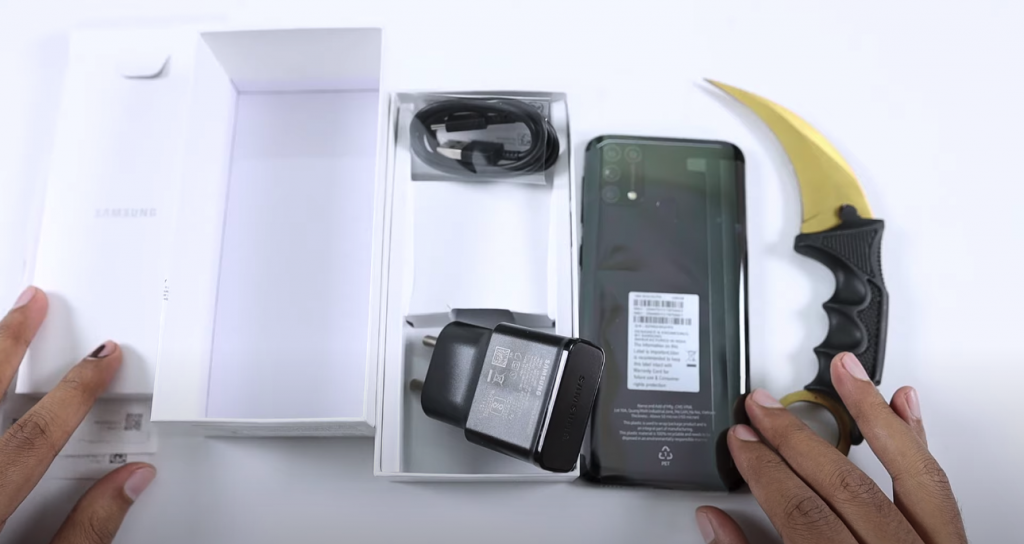 We got the Black coloured 128GB variant of the device for this review. The inbox materials included the phone, USB Type-C data syncing and charging cable, 15W charger, SIM ejector pin, and a few leaves of documentation. You don’t get any earphones in the box.

Design-wise the Galaxy M31 is pretty much a familiar device since it looks the same as the M30s with the all-plastic uniform body design and a slightly bigger looking U-shaped notch. The bezels are slimmer, but the chin looks chunkier, which we can say is fine for a phone of this price.

While the Galaxy M31 doesn’t feel premium it doesn’t look cheaper either. Despite being plastic-built durability is not an issue. With 8.9mm of thickness and corners being rounded the Galaxy M31 fits well into the hands. Much as it is taller, the single-hand use is not a problem. Weight balance is appreciably good as well despite the phone cramming a mammoth 6,000mAh battery. 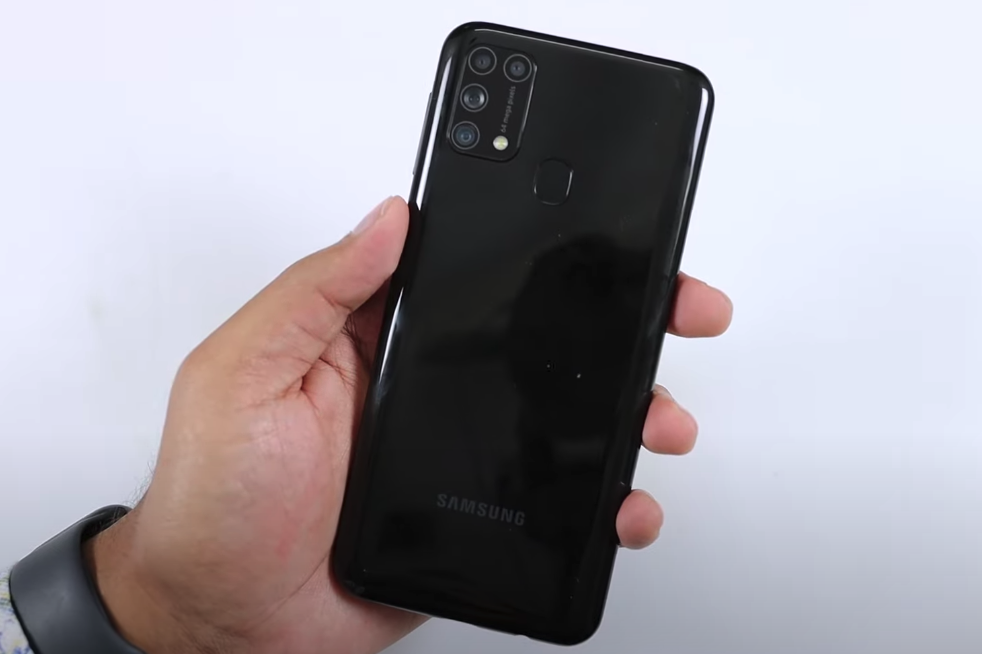 The phone is protected by Gorilla Glass 3 though we would have appreciated if it had used the Gorilla Glass 5 at this price point. Although the back is plastic it comes with a glass-like glossy finish. It does attract fingerprint smudges and, to some extent, scratches as well, thus necessitating the use of a third-party cover from the word go.

The top-left rear of the phone tacks on a quad-camera set up in a rectangular module, the right side below of which sits the oval-shaped fingerprint scanner. The power button lies on the right side of the phone sitting below the volume rockers while the 2+1 hybrid SIM card tray finds a place on the left edge. At the bottom, there is a USB Type-C port flanked by 3.5mm headphone jack and a single speaker that produces satisfactory sound quality. 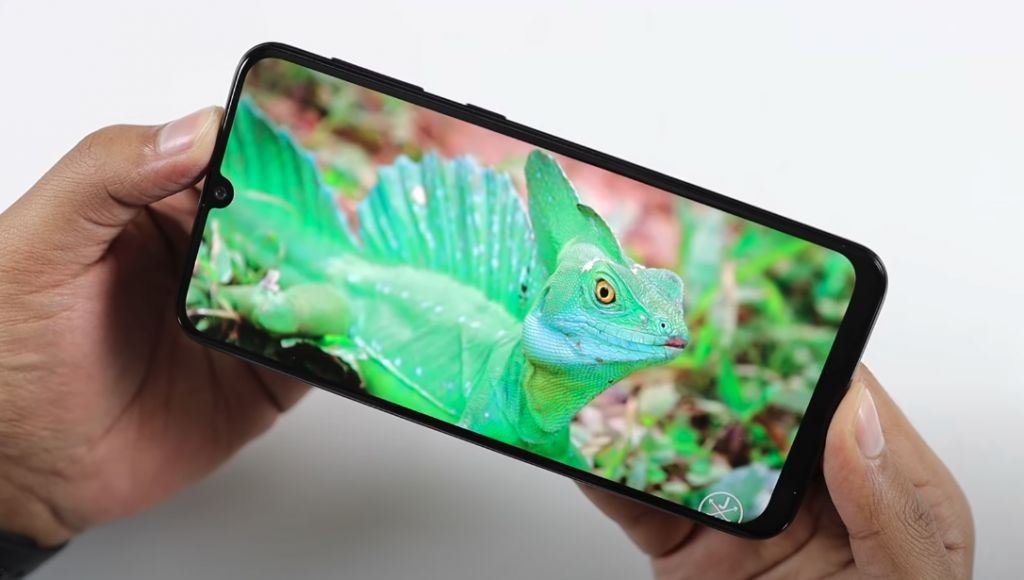 The users are in for a treat of an immersive viewing experience regardless of the chin size. Widevine L1 support for HD content streaming adds to that experience further. Despite the display is AMOLED the Galaxy M31 makes use of a physical fingerprint scanner, which works precisely with pretty fast unlocking.

The Galaxy M31 is kitted with the in-house Exynos 9611 octa-core SoC that also drives the Galaxy M30s and also world’s bestselling Galaxy A51. This 10nm SoC is, of course, not a slam-bang, but it handles the day-to-day multitasking quite decently.

Because 6GB RAM is standard in both the variants apps on the Galaxy M31 load faster although a few bigger apps might take slightly longer loading time.

The Galaxy M31 is not gaming-centric, however, armed with Mali-G72 MP3 GPU it handles gaming, even the demanding ones like the PUBG and CoD, with ease on default settings. Once launched the games go on playing smoothly without the drop frames and lags. The Dolby Atmos 360-degree surround sound system elevates the gaming experience further. We noted the battery draining was not aggressive. 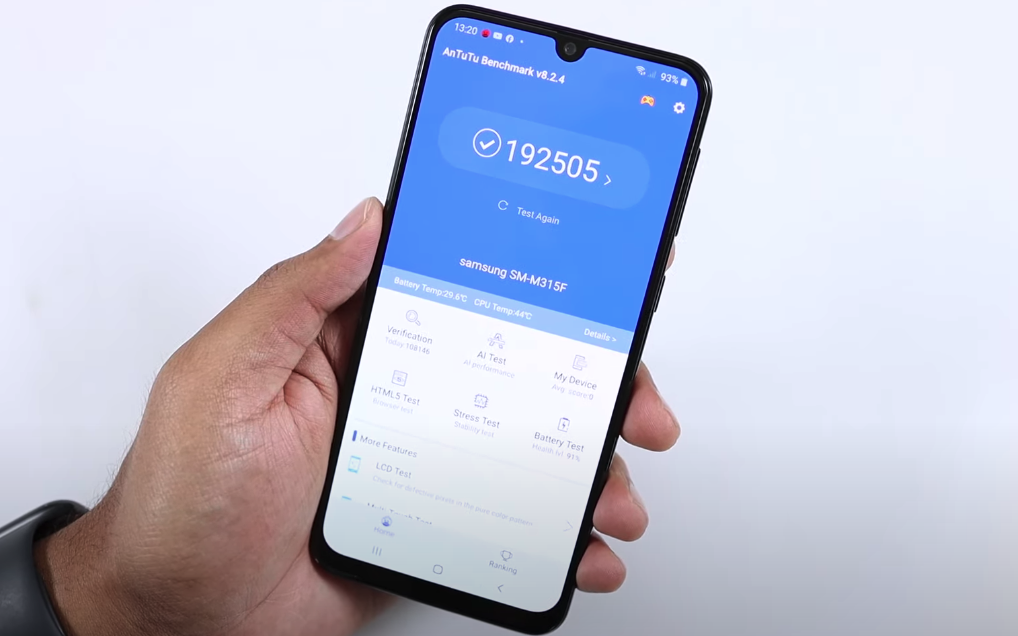 So far as the software experience is concerned, the Galaxy M31 runs One UI 2.0 with the latest Android as the base. As a result, everything is snappy as the phone responds quite fast. The icons are visually appealing and there is a dedicated Dark Mode to ease your eyes.

A big part of the appeal of the Galaxy M31 is its upgraded camera system. The rear camera setup is more versatile with quad sensors for different ways of photography. A large 64MP primary sensor takes the lead and clicks default 16MP pixel-binned images that look brighter, rich in colors, and well detailed. Dynamic range photos are especially impressive. The photo quality, however, deteriorates in the lack of natural lighting. There is a Night Mode to rescue but we feel the feature has scope for improvement. 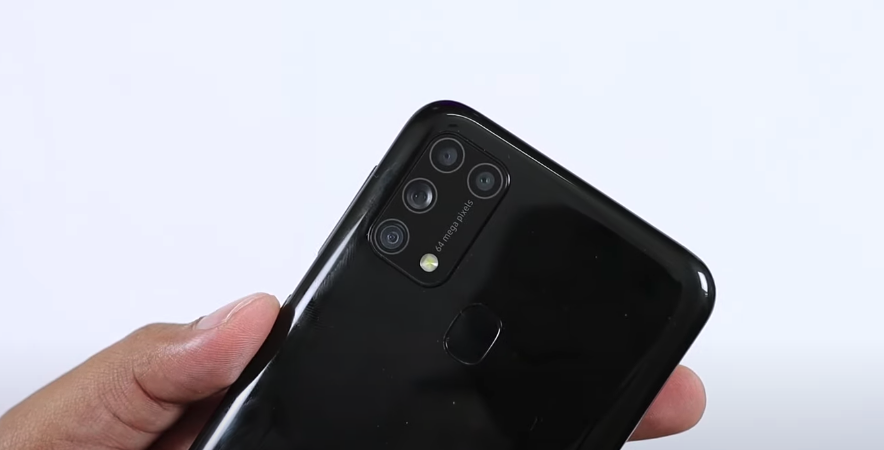 The selfie camera has been bumped to 32MP which captures beautiful natural-looking selfies without enhancing colors or smoothening the face too much. Portrait images are just right and pleasing to the eyes. The selfie camera, as well as the primary camera at the back, can shoot 4K videos at 30 fps. Videos shot on the go turn out to be shaky, but, here, the use of Super Steady Mode does the trick.

Users in the budget midrange segment usually are more inclined towards buying a phone that has a good camera unit and a big battery. While the Galaxy M31 has an impressive camera it also ticks the box for a big battery.

The phone stacks a humongous 6000mAh battery that will ensure you won’t have to look for the plugging point at the end of the day. On moderate use, the battery can last as good as two days. On the downside, however, the phone is shipped with 15W charger which charges the battery with a slow pace. It takes around 2.5 hours to 3 hours to get fully charged.

During the review, we were fairly impressed with Galaxy M31 for the most part though we had some nitpicks that include not so good low-light photography and lack of an in-display fingerprint sensor. Nevertheless, packed with a crisp and vibrant AMOLED display, a highly durable 6,000mAh battery, impressive 64MP quad camera, and a dependable chipset coupled with an adequate amount of RAM the Galaxy M31 makes a strong case for it. If you are in need of buying an affordable but a well-rounded phone without sacrificing the brand cachet, the Galaxy M31 is certainly a good option for you at present. Go for it.