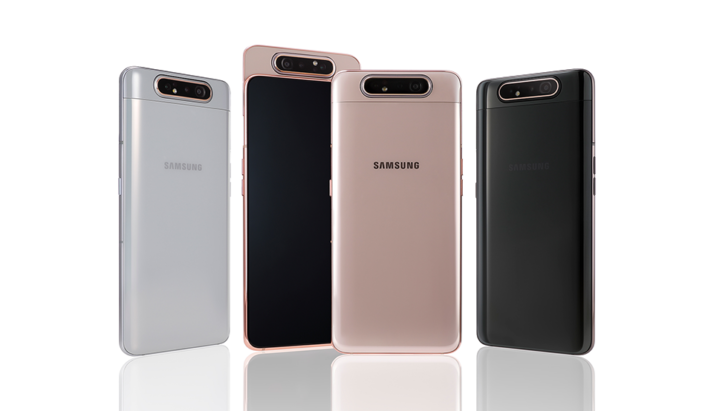 After churning a great deal in the rumor mill, the Samsung Galaxy A80 has finally seen the light at “A Galaxy” event held in Bangkok today. The new smartphone catering to the mid-to-high-end segment of buyers has come with full-view display sans any notch or punch hole selfie camera. Instead, the Galaxy A80 makes use of triple-rear camera setup which also can be rotated to the front to take selfies. Plus, the Galaxy A80 becomes the first smartphone to have used Snapdragon 730G SoC that Qualcomm unveiled just yesterday.

The Galaxy A80 sports a 6.7-inch 1980x2400p FHD+ truly bezel-less Super AMOLED display that the company is touting as “New Infinity” display with 20:9 aspect ratio. Interestingly, to ensure a full-viewing real estate, Samsung has completely done away with the in-vogue up-front notch or the punch-hole selfie camera.

As the Galaxy A80 features a horizontally aligned triple-camera module at the rear the same module when in need, slides up and rotates towards the front to serve the purpose of taking selfies or video calling. This mechanism has the potential to create a bandwagon effect in the future, though OPPO N1 has used the rotating camera concept for the first time, that was a long time back in 2014, however. 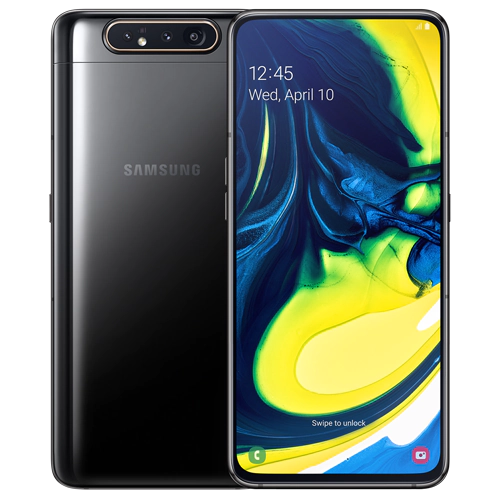 Since the rear-mounted camera module comprises a 48MP primary sensor with f/2.0 aperture, an 8MP 123-degree ultra-wide sensor with f/2.2 aperture, and a third 3D depth sensor the same powerful trio of sensors will come in use for selfies as well, thus automatically elevating the selfie taking affair to a great level.

Under the hood, the Galaxy A80 is powered by an 8nm Snapdragon octa-core 730G SoC with two cores clocked at 2.2GHz and six cores at 1.7GHz. The processor performs in consort with 8GB RAM and 128GB default storage which has no expandability support though.

In terms of software, the Galaxy A80 boots Android 9.0 Pie with One UI laid on top. A 37,000mAh battery with 25W fast charging support keeps the light on. The AI-powered battery intelligently regulates the supply of juice to conserve power.

The Galaxy A80 has a 3D glass back design with metal trims. The vintage 3.5mm audio jack is abandoned and instead, the smartphone makes use of USB Type C port. The biometric is taken care of by ultrasonic in-display fingerprint sensor along with the Face Unlock feature.

The Galaxy A80 is priced at EUR649 (Approx. INR50,500) in Europe and will hit the global market on May 29 in Angel Gold, Ghost White, and Phantom Black color options.

At the event, Samsung also announced the availability of the mid-range Galaxy A70 that went official a week ago with in-display fingerprint sensor, triple-rear cameras, Snapdragon 670 SoC, up to 8GB RAM, and 4,500mAh battery. The A70 will go on sale starting April 26 in Black, Blue, White, and Coral color variants.