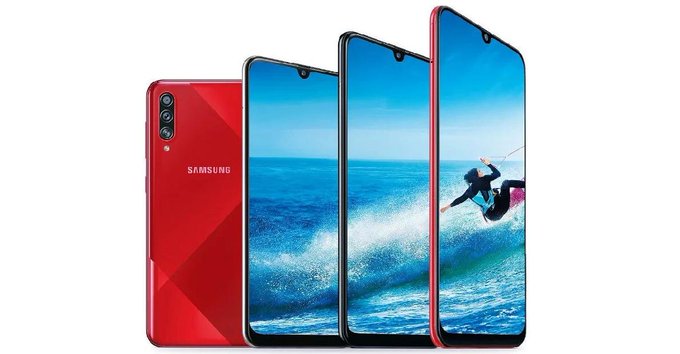 The 64MP camera smartphone is the trend in the making. After the launch of the Redmi Note 8 Pro and the Realme XT and X2, a new smartphone, the Samsung Galaxy A70s with 64MP main camera has launched today, first in the Indian market.

Before the launch, the Galaxy A70s had recently gone past the TENNA certification, revealing some key specs which turned out to be true. The Galaxy A70s comes with 6.7-inch AMOLED display, Snapdragon 675 SoC and a triple-rear-camera setup containing a 64MP main sensor.

The Galaxy A70s packs a 6.7-inch Super AMOLED Infinity-U display with 1080x2400p FHD+ resolution and 20:9 aspect ratio. There is water-drop style notch on the display which also embeds a fingerprint scanner underneath.

Under the hood, the 11nm Qualcomm Snapdragon 675 octa-core SoC powers the device paired with Adreno 616 GPU, 6GB/8GB RAM, and standard 128GB internal storage, expandable up to 512GB via microSD card that using a dedicated slot.

In addition to 64MP f/1.7 ISOCELL Bright GW1 sensor, the triple-rear camera module includes the same two sensors from the Galaxy A70- an 8MP f/2.2 wide-angle sensor and a 5MP f/2.2 depth sensor. The same 32MP f/2.0 selfie shooter from the Galaxy A70 has been carried forward to the Galaxy A70s.

The smartphone runs Android 9 Pie with One UI slapped on top while it is backed by 4,500mAh battery equipped with 25W fast charging over USB Type-C. There is no presence of the traditional 3.5mm headphone jack, unfortunately.

As for the launch of the Galaxy A70s in the International markets the company has not revealed anything as yet.