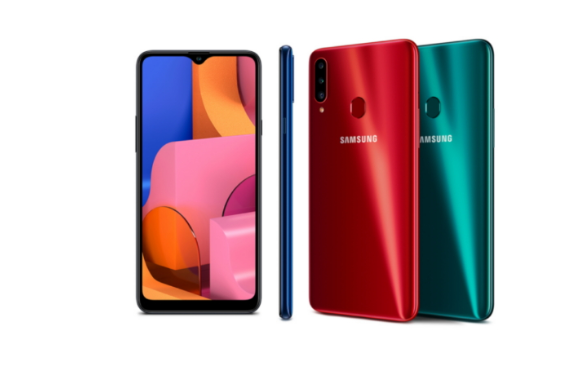 After seeing the daylight in Malaysia last month the Samsung Galaxy A20s has now been launched in India, albeit in a quiet manner. The smartphone is the refreshed version of the Galaxy A20 which was launched back in March this year.

The Samsung Galaxy A20s, in terms of change, gets a Super AMOLED display, a triple-rear-camera setup, and an octa-core Snapdragon processor instead of an in-house Exynos SoC. Also, the new phone comes in a slim design language with a mirror-like finish at the back.

The Samsung Galaxy A20s is priced at INR11,999 for the 3GB RAM+32GB storage model and INR13,999 for the 4GB RAM+64GB storage model. The smartphone goes on sale from today onwards via all important online and offline channels across India. The colorways include Red, Black, and Blue.

Talking about the specs of the handset, it features a 6.5-inch 720x1560p HD+ Super AMOLED Infinity-V display with a 19.5:9 aspect ratio. The Infinity-V display means the phone sports a small water drop-style notch at the top of  the display. 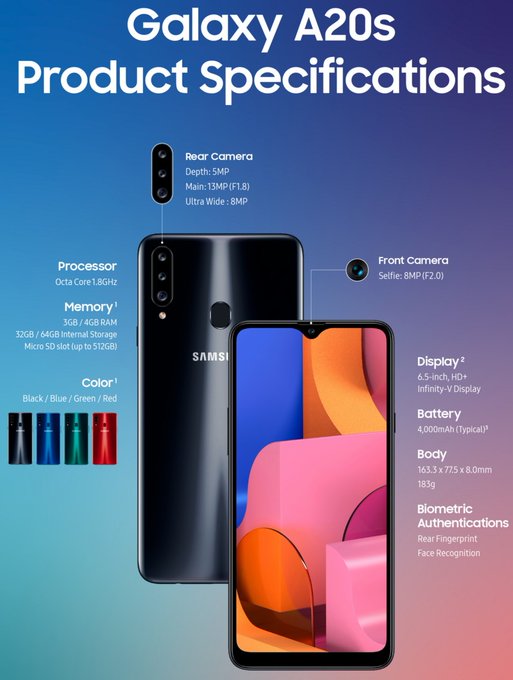 While an Exynos 7884 SoC powers the Galaxy A20, a 1.8GHz Qualcomm Snapdragon 450 octa-core SoC built on 14nm process pumps the power from under the hood in the Galaxy A20s. The smartphone also packs an Adreno 506 GPU, 3GB/4GB RAM, and 32GB/64GB built-in storage, which can be expanded up to 512GB via a microSD card.

Turning to the back, the device mounts three cameras in vertical layout as well as a circular fingerprint scanner. The triple-rear camera setup comes with a combination of 13MP f/1.8 primary sensor, an 8MP f/2.2 ultra-wide sensor, and a 5MP f/2.2 depth sensor. The front gets an 8MP f/2.0 selfie shooter that lies enclosed in the notch.

On the software side of things, the Galaxy A20s runs One UI 1.5 atop Android 9 Pie out-of-the-box while for the fuel it has the same 4,000mAh battery with 15W fast charging support as found in the Galaxy A20. The Galaxy A20s is equipped with Dolby Atmos Surround Sound technology.