Samsung Galaxy A2 Core launches in India, priced at 5,290 INR 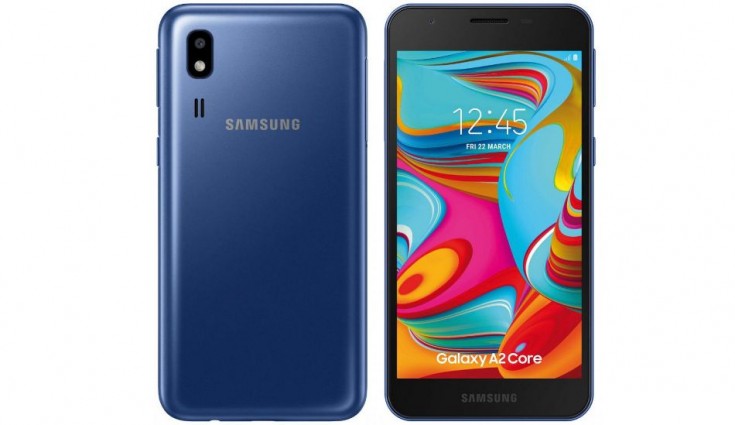 Samsung had launched the Galaxy J2 Core in India back in August last year. And now it has launched its second Android Go smartphone in the country. However, the phone comes under A series instead, since Samsung has pulled the plug on its J series for good.

The new smartphone is called the Galaxy A2 Core and it too mimics other Android Go smartphones by offering minimal specifications geared towards the low budget segment of the market.

The Galaxy A2 Core comes in plastic body design and sports old-style chunkier bezels around the display. The top bezel hosts a selfie camera, earpiece and proximity sensor while the bottom bezel shows off Samsung moniker. The bottom edge is lined with an earphone jack and micro USB port. The rear panel mounts a primary camera along with LED flash and a loudspeaker.

In terms of specifications, the Galaxy A2 Core flaunts a 5-inch qHD (960x540p) display while draws its power from an octa-core MediaTek Exynos 7870 SoC clocked at 1.6GHz. Aiding the processor is paltry 1GB RAM and 16GB internal storage, however, expandable up to 256GB via microSD card.

The optics include a 5MP rear primary camera as well as a 5MP secondary front-facing selfie camera. On the software front, the smartphone runs Android Pie (Go Edition), a skimmed version of Android for the smooth functioning of the devices featuring bare minimum specs. The Galaxy A2 Core is armed with a decent 2,600mAh battery to derive fuel.

The connectivity options for the handset include 4G LTE, Wi-Fi, GPS, Bluetooth 4.2, FM radio, micro-USB port, 3.5mm headphone jack, and dual SIM slots. The phone measures 141.5×70.9×9.1mm in dimension and weighs 142 grams. Notably, the Galaxy A2 Core misses out on a fingerprint scanner.

The famous Mumbai-based smartphone retailer, Mahesh Telecom, has spilled the beans that the Galaxy A2 Core is already available offline to purchase at a price of INR5,290 in Blue and Black color options though Samsung has kept it mum. An official confirmation is anyway awaited.

Interestingly, the price of Galaxy A2 Core is INR1,000 cheaper than the price of its predecessor, the Galaxy J2 Core at launch.  However, its rival the Redmi Go comes at INR4,499 only.