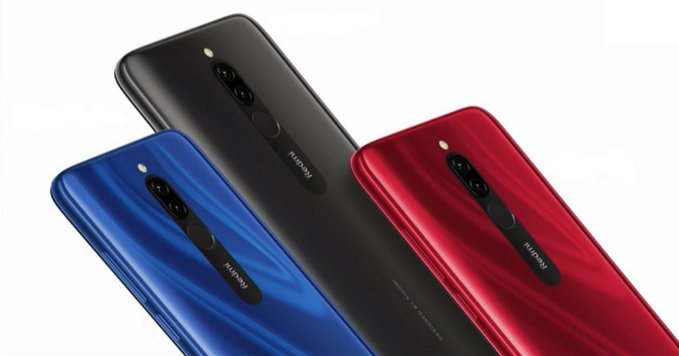 The entry-level Redmi 8 features AI-enabled dual-rear camera setup, a Dot Notch display, and a beefy 5,000mAh battery as some of its highlighting features.

The smartphone is priced at INR7,999 for the 3GB RAM+32GB storage model and INR8,999 for the 4GB RAM+64GB storage model. The first 5 million units of the top-end variant will, however, be offered on just INR7,999. The sales start from October 12 via Flipkart. Mi.com, and Mi Home Stores.

The phone comes in Aura Mirror Design. And so far as the colors are concerned, it will be available in Sapphire Blue, Onyx Black, and Ruby Red options

In terms of specifications, the Redmi 8 sports a 6.22-inch 720×1520 HD+ IPS display with19:9 aspect ratio, 320ppi pixel density, and Gorilla Glass 5 protection. The display also features a water drop-style notch at the top. 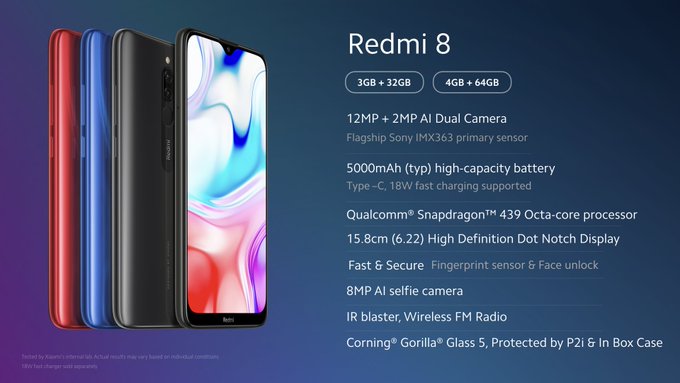 Under the hood, the Redmi 8 makes use of an octa-core Qualcomm Snapdragon 439 SoC which is built on the 12nm fabrication process. The smartphone packs 3GB/4GB RAM and 32GB/64GB built-in storage that is supported by a dedicated microSD card slot for expansion up to 512GB.

Turning to the back, the Redmi 8 tacks on a 12MP f/1.8 Sony IMX363 primary sensor paired with a 2MP depth sensor. The rear camera module comes with the support of the goggle lens capable of deciphering 104 languages.

On the front, there is an AI and LED flash-enabled 8MP selfie shooter housed in the water-drop notch. The selfie camera is also equipped with Face Unlock feature, but a dedicated fingerprint scanner is also mounted on the rear for biometrics.

A massive 5,000mAh battery supported with 18W fast charge fuels the phone via USB Type-C. Redmi claims that the battery lasts up to 12 hours of video recording. On the software side of things, the Redmi 8 runs Android 9 Pie with MIUI 10 on top.

Amongst other things, the smartphone comes with P2i splash resistance, a 3.5mm headphone jack, IR Blaster, and Wireless FM Radio. The device measures 156.3×75.4×9.4mm in dimension and tips the scale at 190 grams.

The company also announced that the Redmi Note 8 Pro with 64MP Quad Rear camera will be launching on October 16 in the Indian market. So, stay tuned with us.