Redmi 7A launched with Snapdragon 439 SoC and 4,000mAh battery for 5,799 INR introductory price

The Redmi 6A was set to get a successor in the Redmi 7A, but it was not known that the latter will come with massive upgrades. The Redmi 7A, launched today, actually scores over its predecessor almost in all aspects. The Redmi 7A which is also dubbed as “Smart Desh Ka Phone” features a Snapdragon 439 SoC, HD+ display, a 12MP Sony sensor, a 4,000mAh battery along with an AI-equipped Face Unlock feature.

After the Redmi Go, the Redmi 7A will be another entry-level smartphone from Xiaomi this year to cater to the low budget segment in the country.

However, they will be available at INR5,799 and INR5,999 respectively with INR200 special discount for the month of July only. The discount is offered due to the celebration of Xiaomi’s fifth anniversary. The phone will be available in Matte Black, Matte Gold, and Matte Blues color options. 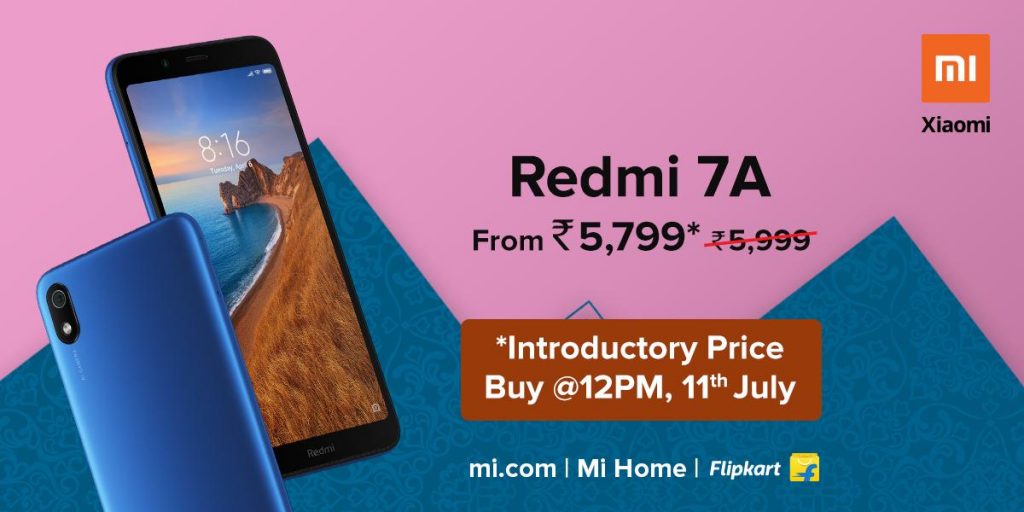 The Redmi 7A comes with a unibody metal design with a matte finish. Jumping into the specifications, it wraps a 5.45-inch HD+ display up front with 18:9 aspect ratio. Under the hood, it pumps power with a 12nm Qualcomm Snapdragon 439 octa-core SoC clocked at 2GHz, which is paired with 2GB RAM and up to 32GB internal storage.

In the camera department, the Redmi 7A sports single camera unit both on front and back. A 12MP Sony IMX486 sensor with AI lies on the back while the front mounts a 5MP selfie shooter with several AI features including AI Beauty camera and background blur. AI scene detection is also promised over an OTA update soon.

The phone is backed by a bigger 4,000mAh battery relative to the Redmi 6A. The battery promises 17 hours of HD video playback and up to 30 hours of 4G VoLTE calling. In the software side of the things, the Redmi 7A runs Android 9 Pie with MIUI 10 overlaid.

For its entry-level characteristics, the Redmi 7A misses out on a fingerprint scanner but an AI Face Unlock feature compensates for that. The phone uses 2i coating for splash resistance and features a Micro-USB port, 3.5mm audio jack, and three card slots for accommodating two SIMs and a microSD card for storage expansion.