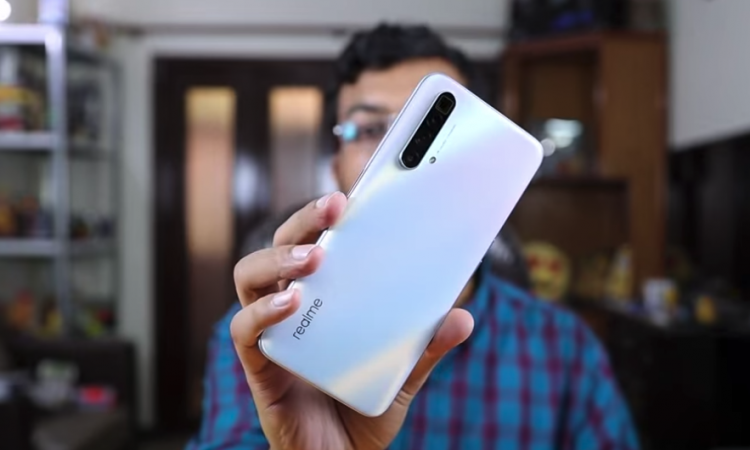 The Realme X3 SuperZoom sounds exciting from the get-go, especially for its revealing name. It comes equipped with a periscopic telephoto lens with a 5x optical zoom while offering up to a total of 60x hybrid zoom. If that is impressive, there is more to it. It is a full package in terms of specs.

It has got a 120Hz display, Snapdragon 855+ SoC, 30W Dart charging, and plentiful of cameras, but the major USP of the phone is its whopping zoom capability. So, let’s check out how it performs on this front and other aspects. Here is our review for the Realme X3 SuperZoom.

The Realme X3 SuperZoom starts at INR27,999 for the base 8GB RAM+128GB model. The top-model with 12GB RAM+256GB configuration costs INR32,999. The smartphone is exclusive to Flipkart besides the company’s Realme.com website. 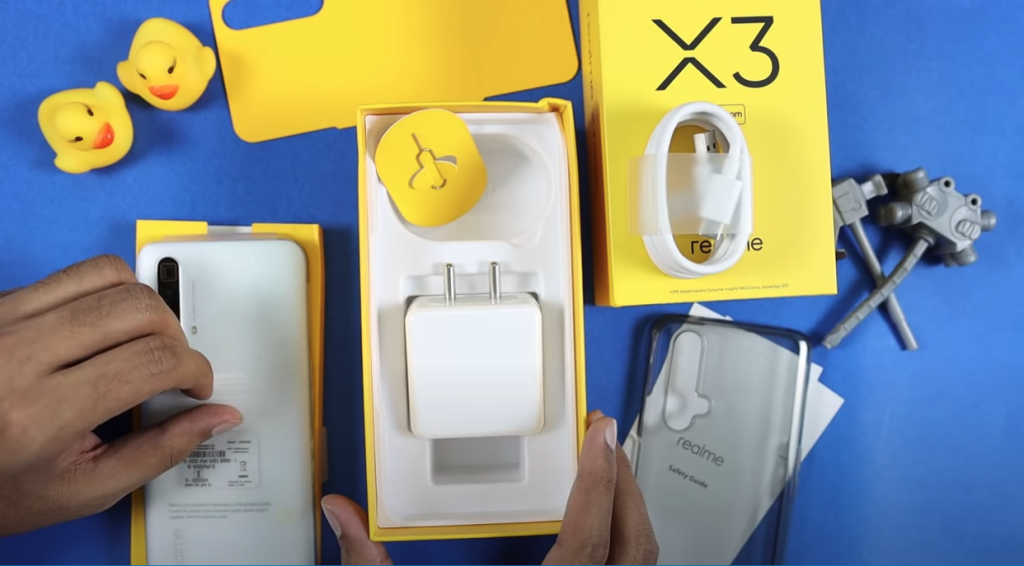 The smartphone comes in an inviting yellow-colored box. We collected the Realme X3 SuperZoom handset in Arctic White color, a SIM ejector tool, a good-quality jelly case, USB Type-C cable, 30W Dart Charge power adapter, and some paper works from inside the box. No earphones were there.

The Realme X3 SuperZoom looks premium but not unique. It carries the same design that we have seen from Realme for quite some time in this segment. The phone’s in-hand feeling is pretty satisfying, particularly for its robustness. A Gorilla Glass 5 protection layer is pretty reassuring. 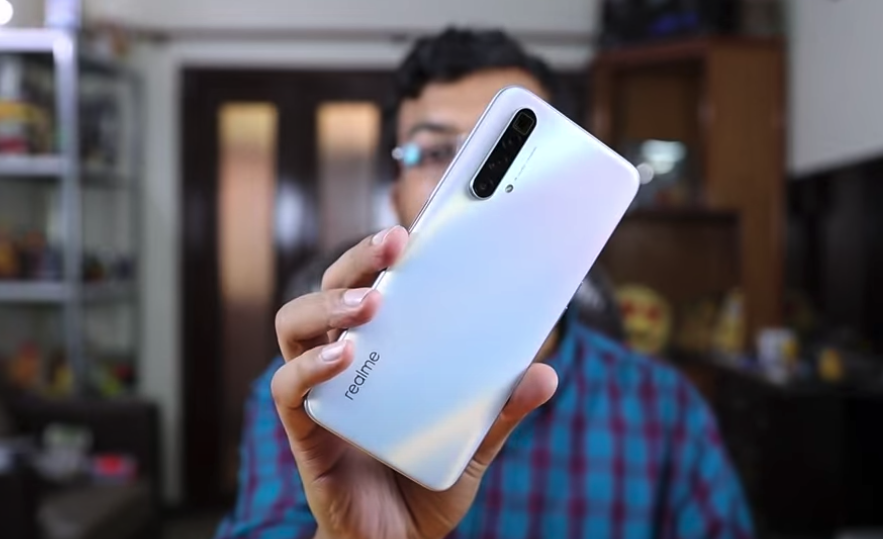 At 202 grams, the Realme X3 SuperZoom doesn’t come across as heavy thanks to the well-balanced weight distribution. The phone has a glass back that separates itself from the display by a plastic frame. A vertically aligned quad-rear-camera sits at the upper left. The rear shows a beautiful holographic effect when lights fall on it from different angles. Upfront, the bezels are significantly slim except the chin. There is a pill-shaped cutout for the dual-selfie camera at the top-left corner of the display.

For the ports and buttons, the top edge of the phone is clean, with only a noise-cancelling mic. On the other hand, the bottom gets a USB Type-C flanked by a speaker grille and dual-Nano SIM tray. Also, at the bottom, there are microphones. The 3.5mm traditional audio jack is, however, missing. 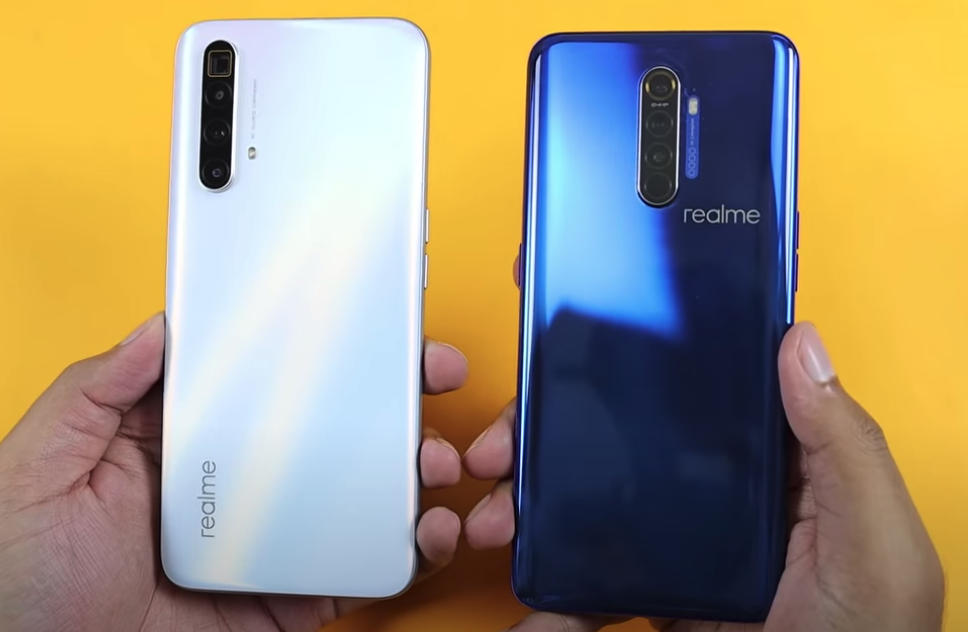 The Realme X3 SuperZoom features a 6.6-inch display with FHD+ (1080×2400) resolution and a 20:9 aspect ratio. While its predecessors, the Realme X and X2, had AMOLED screen, the X3 SuperZoom uses an LCD screen. However, it makes up by equipping the display with 120Hz refresh rates due to which scrolling and gaming, appear pretty lucid and snappy. Users can also change the refresh rate settings or can use the Auto mode according to the situation. 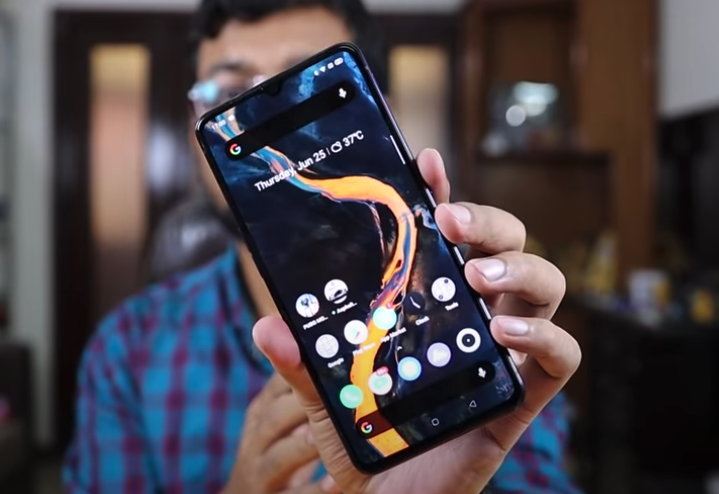 Though an LCD panel colors and sharpness on the screen look great, the white balance is also well maintained. No issues with touch inputs either. The camera cutout is well placed, offering little obstruction while watching the content. Ideally, we prefer an AMOLED display with 90Hz refresh rates than an LCD display with 120Hz refresh rates, but here, the LCD display does really well, leaving us with no complaints. One thing which could be improved is the screen brightness, it is not a very bright display and readability is low in sunlight. 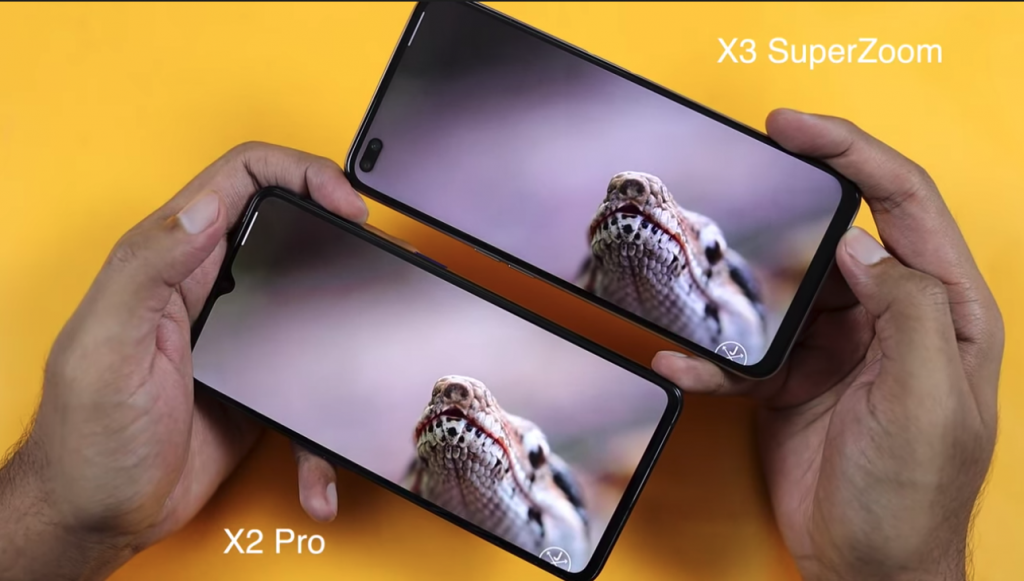 There is a side-mounted fingerprint scanner that is quick to access, accurate, and is pretty fast. The face unlock performs satisfactorily as well.

The Realme X3 SuperZoom is powered by Qualcomm Snapdragon 855+ SoC coupled with 8GB or 12GB LPDDR4x RAM and 128GB or 256GB UFS 3.0 internal storage with no expansion support. Though the chipset is a year-old one, it has all the firepower to handle the multitasking as well as the high-end gaming. Thanks to the 120 Hz refresh rate, the gaming overall feels more fluid. We hardly encountered lags or stutters during playing games that included PUBG, CoD, and Fortnite. 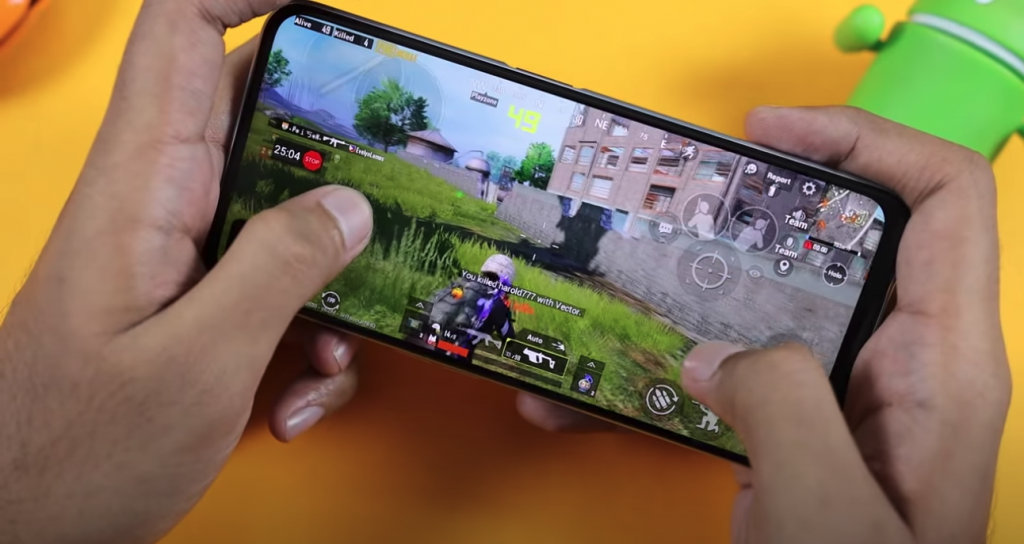 Opening of apps and switching between them are superfluid; after all, the smartphone possesses an ample amount of RAM. There is also liquid cooling 3.0 technology to keep the hardware cool to derive optimal performance. There are no stereo speakers, but the bottom-firing single speaker, with the help of Dolby Atmos, seemed adequate.

The software front is covered by Realme UI, which runs atop Android 10 having useful customizations and features, including the system-wide dark mode and smart sidebar that allows quick access to apps. There are also smart power-saving and performance modes, gestures, native screen recording, and app cloning mode. The UI offers near-stock Android experience.

The 8MP ultra-wide sensor also performs well. Images clicked by it are lively, well-detailed, and good in wide dynamic range. The 2MP macro sensor, on the other hand, captures attractive close up shots but fails to add ample details. It also takes some time to focus. 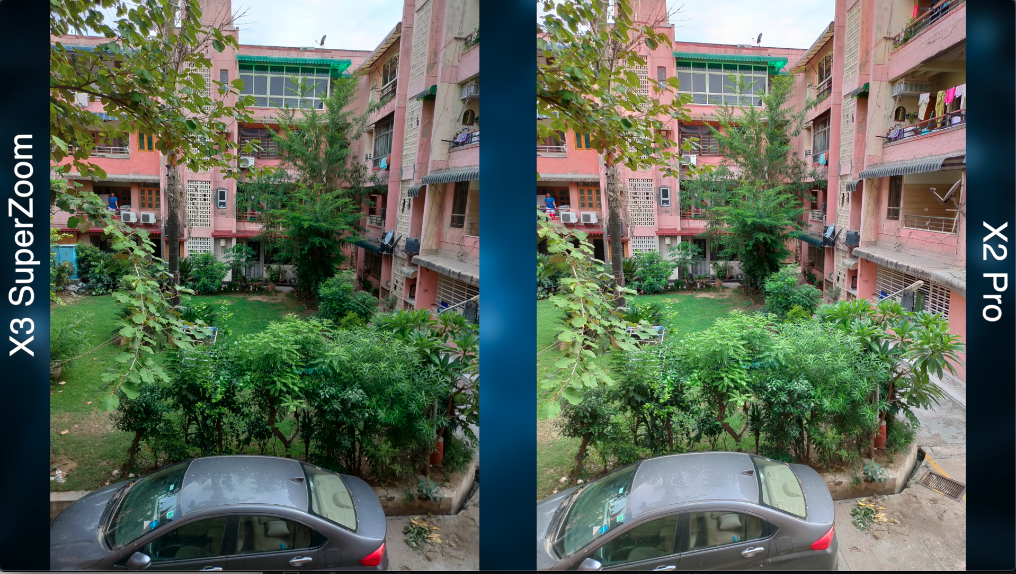 The 8MP periscopic telephoto lens, the main highlight of the Realme X3 SuperZoom, is quite competent. The images captured are sharp, detailed, and less noisy. However, that is true for up to 5x optical zoom. Anything beyond that compromises with clarity and details.

In low light, the primary sensor works well, however, aided by a dedicated night mode. The output from the ultra-wide and telephoto sensors without the night mode is average.

The new Nightscape 4.0 has a Pro and a Starry mode. The Starry mode captures stars and constellation but takes a long four minutes to capture an image, so it is advised to use a tripod or hold the phone still against an object. 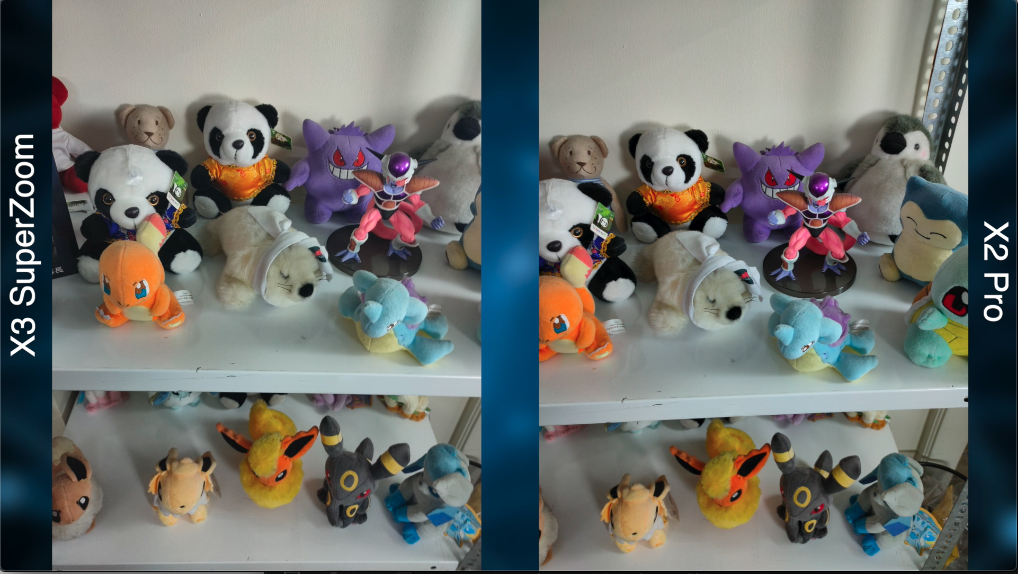 The dual selfie 32MP+8MP camera array allows users to switch between the regular and ultra-wide modes, ensuring more of the background and people in one frame. During the daylight, both the sensors take clear and detailed images with HDR working better in the second sensor. During the night, however, one has to take recourse to night mode for a satisfactory result.

About the video, the Realme X3 SuperZoom can shoot up to 4K videos at 60 fps but only using the primary camera. If you are shooting at 1080p, you are free to switch between the sensors. Stabilization works fine during the day, but it struggles and produces shaky and grainy footage during the night. The Ultra Steady Video, however, comes to the rescue. Overall, we really like the camera setup on Realme X3 Super Zoom.

The Realme X3 SuperZoom is backed up by a 4,200mAh battery that draws charge at a maximum rate of 30W through USB Type-C port. In our battery charging test, we found it to reach 54 percent in 30 minutes, while 100 percent charge was ensured in 63 minutes, which is impressive and close to the company’s claim of 54 minutes. Not to forget, their claim is based on a completely controlled environment testing. The battery endures a whole day even on heavy usage after a full charge. That is praiseworthy considering that the smartphone uses a powerful chipset and high refresh rates that together eat up the battery. 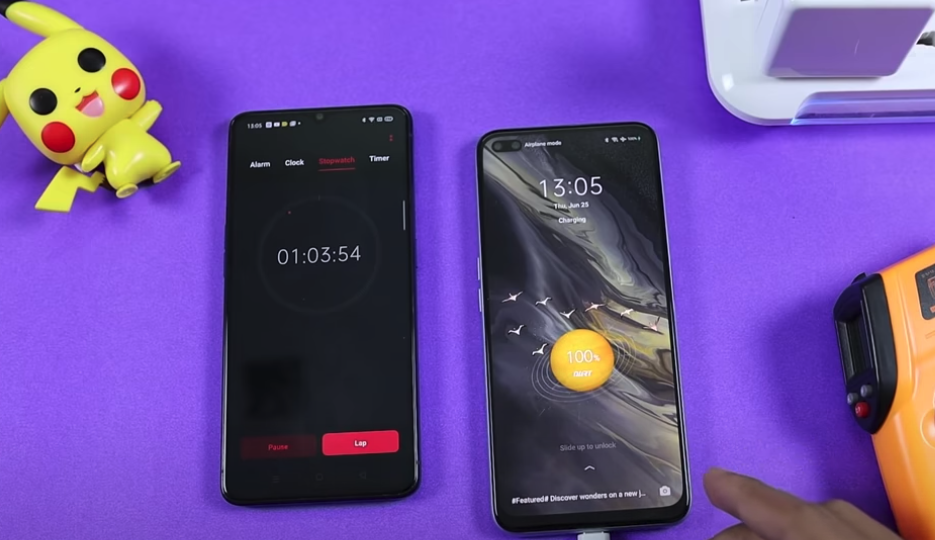 The Realme X3 SuperZoom has everything premium under its belt including a 64MP quad-camera module with a periscopic telephoto sensor, 120Hz refresh rates, durable battery, and a good processor. And to check the price in the affordable flagship ballpark, it sensibly uses Snapdragon 855+ SoC, which effectively blurs the performance parameters with the latest Snapdragon 865 SoC.

However, despite being attractive, it lacks stereo speakers and display brightness is not up to the mark. But still, the Realme X3 SuperZoom is a well-rounded affordable flagship device that offers excellent value for your money. You can go for it if performance, battery life and day-time photography are your priority. You can buy it on Flipkart.

Realme X3 SuperZoom is a well-rounded affordable flagship device that offers excellent value for your money.