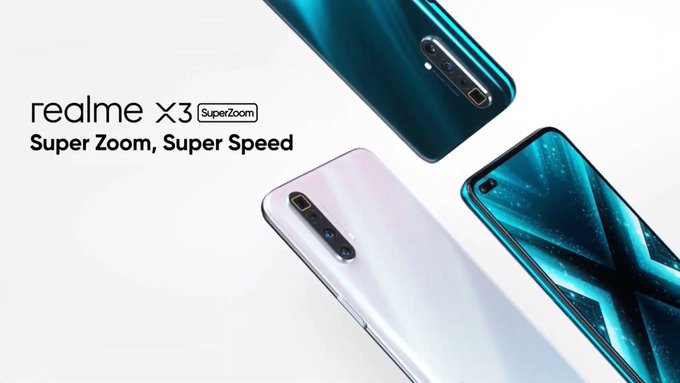 The Realme X3 Super Zoom will go on sale starting June 2 for which pre-booking has already begun. Customers will have Arctic White and Glacier Blue color options to choose from. So far there is no word as to when the smartphone will enter the Indian market.

In terms of specifications, the Realme X3 Super Zoom features a 6.6-inch full HD+ (1080×2,400) IPS LCD screen with a whopping 120Hz refresh rate and Gorilla Glass 5 protection on both the front and the back. 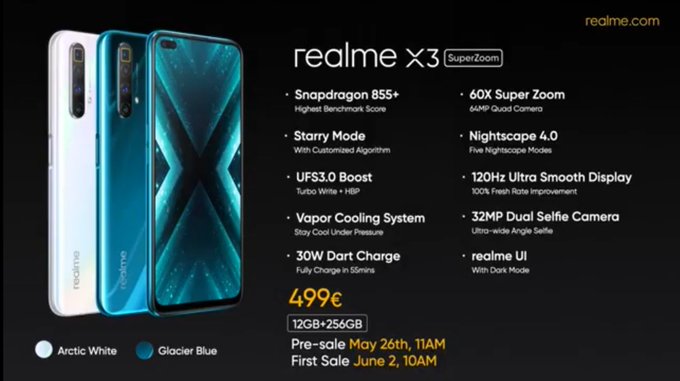 Under the hood, the smartphone pumps power with help of Snapdragon 855+ octa-core SoC which is paired with Adreno 640 GPU, up to 12GB LPPDR4x RAM and up to 256GB UFS 3.0 internal storage minus the expansion support. The smartphone has Vapor Cooling support to minimize the heating. Regarding software, it runs Android 10 with Realme UI laid on top.

The optics part includes a dual-selfie camera and quad-rear camera setup. The display has a peal-shaped camera cutout where a 32MP camera and an 8MP camera are housed for selfies and video calls.

Towards the back, the quad-camera setup is vertically laid out at the top-left corner of the panel. The camera array is led by a 64MP f/1.8 primary sensor along with an 8MP sensor with a periscopic lens which is touted to offer 5x optical zoom or 60x digital zoom and OIS. The other two cameras at the back include an 8MP ultra-wide sensor and a 2MP macro sensor. For a notable mention, the smartphone is equipped with a starry mode for astrophotography.

A 4,200mAh non-removable battery is stacked inside that supplies juice to run the show. Thanks to a 30W Dart Charge the battery fills to brim in just 55 minutes of the plugin. The fingerprint scanner on the Realme X3 Super Zoom is on the side, integrated into the home button, which is a convenient placement for a majority of smartphone users.

As far as the connectivity options are concerned, the Realme X3 Super Zoom supports 4G VoLTE, dual-band Wi-Fi, GPS/A-GPS, Bluetooth 5.0, and USB Type-C port. There is no 3.5mm headphone jack, however.