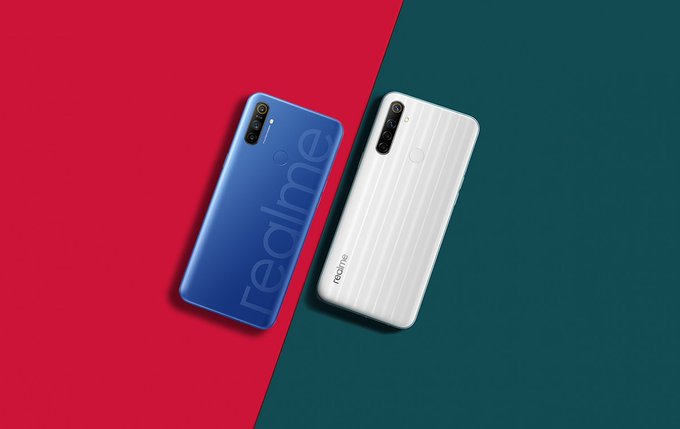 Realme has upped the ante on Redmi by finally launching its new Narzo series in India. The series includes two smartphones, namely the Narzo 10 geared towards the low mid-range market and the Narzo 10A intended for the budget segment.

Initially, the Narzo series was to launch on March 27 but due to subsequent COVID-19 related lockdowns, the launch of the new smartphones had to be pushed back to until today.

The Narzo 10A is priced at INR8,499 for a single 3GB RAM+32GB storage configuration. Being available in So White and So Blue color options the Narzo 10A will go on sale starting on May 22 on Flipkart and Realme.com.

The Narzo 10, on the other hand, is set for INR11,999 for the sole 4GB RAM+128GB storage bundle. The smartphone will be on sale from May 18 in That Green and That White paint jobs on Flipkart and Realme.com.

The water-drop notch on the front houses a 5MP selfie shooter while the rear of the device mounts a triple-camera array in the form of 12MP primary sensor+2 MP macro sensor+2MP depth sensor. 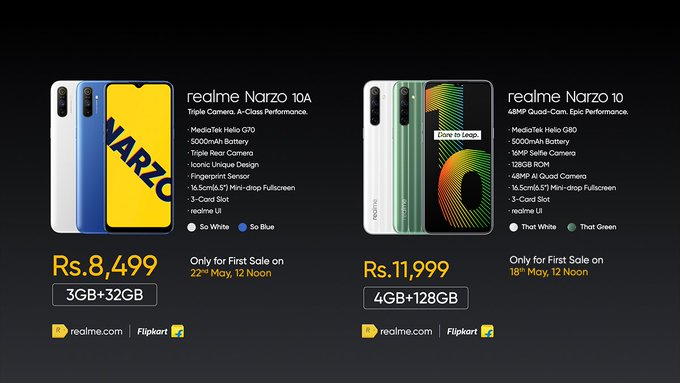 The Narzo 10A has an octa-core MediaTek Helio G70 chipset. The dual-SIM smartphone comes in a single 3GB RAM+32GB storage configuration with a dedicated microSD card slot to expand the storage to up to 256GB. On the software front, the Narzo 10A boots Android 10 with Realme UI laid on top.

A 5,000mah battery which can provide 30 days stand-by time keeps the phone juiced. However, the Narzo 10A lacks any fast charging support. The fingerprint scanner is found on the rear. The phone comes with 4G LTE, Wi-Fi, GPS, Bluetooth, 3.5mm headphone jack, and a rear-mounted fingerprint scanner among other things.

The Narzo 10 is the step-up version of the Narzo 10A as it is powered by a more powerful MediaTek Helio G80 SoC paired with 4GB RAM and 128GB internal storage (expandable up to 256GB).

While the selfie camera lurking inside the water-drop notch is of 16MP the rear-mounted camera setup has also been upgraded to four cameras with a 48MP primary sensor leading the pack. The rest of the camera sensors at the back are rated to be 8MP (ultra-wide), 2MP (depth), and 2MP (macro).

The Narzo 10 rocks the same size 5,000mAh battery but it is armed with 18W fast charging support which the Narzo 10A misses out on. The Narzo 10 also adds a USB Type-C port along with the traditional 3.5mm headphone jack. Similar to the Narzo 10A the fingerprint scanner on the Narzo 10 sits at the back.