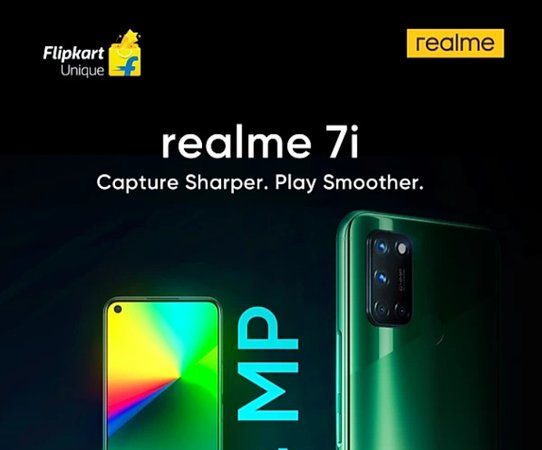 When it comes to specs, the Realme 7i is the pared-down version of the Realme 7. The former is powered by a Snapdragon SoC instead of a MediaTek one and features only an HD+ screen along with a reduced fast charging capability compared to the Realme 7.

Before launching in India, the Realme 7i recently made its foray into Indonesia. However, the Indian version is further trimmed down in terms of RAM as it only features 4GB RAM whereas the Indonesian version has 8GB RAM.

The Realme 7i is priced at INR11,999 in India for a 4GB RAM+64GB storage model while the 4GB RAM+128GB storage model costs INR12,999. The smartphone will be available on Flipkart, Realme.com, and offline stores starting October 16. The color options that one can choose from include Fusion Green and Fusion Blue. 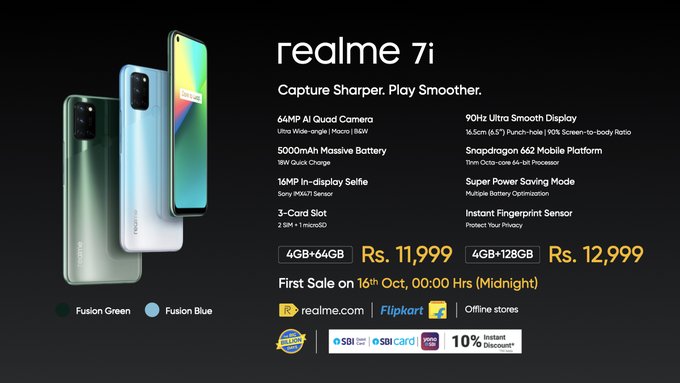 Under the hood, powering the Realme 7i is 11nm Qualcomm Snapdragon 662 octa-core SoC paired with Adreno 610 GPU, 4GB RAM, and up to 128GB internal storage, which can be expanded further by using a microSD card.

In the imaging department, the Realme 7i is no different than the Realme 7 as it carries the same sensors. The triple-rear-camera setup includes a 64MP f/1.8 primary sensor, an 8MP f/2.2 ultra-wide sensor, a 2MP f/2.4 monochrome sensor, and a 2MP f/2.4 depth sensor. The front gets a 16MP f/2.1 selfie shooter. Both the back and front camera systems are capable of shooting videos at 1080p at 30 fps.

On the software side of things, the Realme 7i runs Realme UI based on Android 10 while it packs a 5,000mAh battery same as found in the Realme 7; however, the fast charging is capped at 18W instead of 30W.

Standard connectivity options include 4G LTE, Wi-Fi, GPS/A-GPS, Bluetooth 5.0, USB Type-C port, and 3.5mm headphone jack. Unlike the Realme 7, the Realme 7i misses out on the NFC feature.