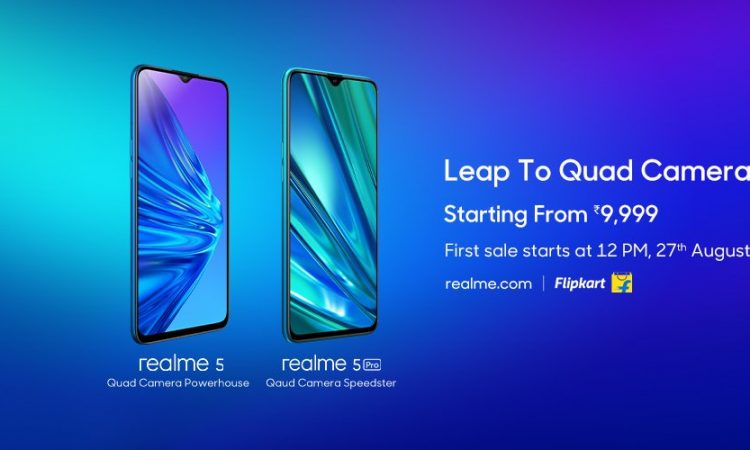 The Realme 3 and Realme 3 Pro have been succeeded with the Realme 5 and Realme 5 Pro. The Chinese manufacturer has skipped the Realme 4 branding. So many vendors have adopted this practice in the recent past so no surprises there.

The Realme 5 and the Realme 5 Pro launched in India today with quad-rear cameras which is a quite a jump from its dual-rear-camera module in its previous smartphones. The smartphone duos are also launched with new Qualcomm Snapdragon processors.

The Realme 5 is packed with a 5,000mAh battery, a huge bump from the 4,230mAh battery found in the Realme 3. The smartphone also bears the distinction of having become the first device in India to use a Snapdragon 665 SoC. The next phone with the same chipset is the Xiaomi Mi A3 which will unveil tomorrow in the country.

Both the smartphones come with the Realme signature 3D diamond-cut design and feature a dew-drop notch that the company is calling Mini-drop notch. The devices are said to be multi-layer splash resistant though Realme didn’t specify the IP rating for it. Both make use of a rear-mounted fingerprint scanner for biometrics.

The Display in both the phones is protected by Gorilla Glass 3+. On the software side of things, they run ColorOS 6 based on Android 9 Pie. The duo features Dirac Power Sound small speaker for the more natural and transparent sound experience.

Both the phones come with Nightscape as well as Chrome Boost mode respectively for better low-light photography and more seamless scene detection. For the differences between the Realme 5 and 5 Pro, they are spotted in the display, battery, SoC, RAM/storage as well as resolution of cameras both on back and front.

In terms of specifications the Realme 5 sports a 6.5-inch HD+ Mini-drop display with 89% screen-to-body ratio. Pumping power from under the hood is the Qualcomm Snapdragon 665 SoC working in alliance with Adreno 610 GPU, 3GB/4GB RAM and 32GB/64GB/128GB internal storage, expandable up to 256GB via microSD card.

The Realme 5 Pro comes with a smaller 6.3-inch display, however, with Full HD+ resolution and 90.8% screen-to-body ratio compared to the Realme 5. For being a ratcheted-up version the 5 Pro also is kitted with a powerful Snapdragon 712 SoC the same one that powers the Vivo Z1 Pro and the Xiaomi Mi 9 SE. The device packs Adreno 616 GPU, 4GB/6GB/8GB RAM and 64GB/128GB internal storage with expandability supoort up to 256GB via microSD card.

The Pro version houses a smaller 4,035mAh battery but unlike in the Realme 5, it is backed by VOOC 3.0 fast charging technology that fills 55% juice in an hour.

The Realme 5 is priced at INR9,999 for the 3GB RAM+32GB storage base model while the 4GB RAM+64GB RAM and the 4GB RAM+128GB storage models are priced at INR10,999 and INR11,999, respectively. The phone goes on sale on August 27 via Flipkart and Realme website in Crystal Blue and Crystal Purple color options.