Realme 3 Pro launched for 13,999 INR along with entry-level Realme C2 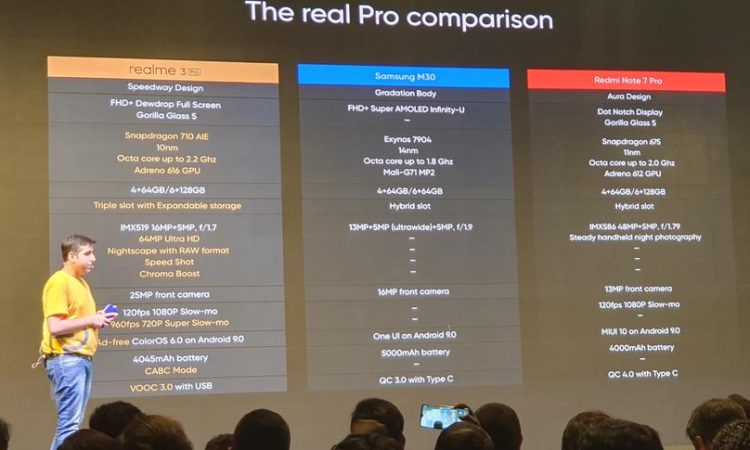 Realme foray into the Indian smartphone market has been a great success with the company introducing aggressively priced but impressively spec’d smartphones at regular intervals. In early March this year, it launched the Realme 3 with a dual-rear camera and 4,230mAh battery and promised that a Pro version of it will follow soon. And that promise materialized today when Realme launched the much-awaited Realme 3 Pro at an event held in Delhi University.

The smartphone was earlier teased with SpeedAwakens hashtag signaling a performance boost. And quite so it is since the smartphone comes powered by a Qualcomm Snapdragon 710 SoC, capable of playing heavy-duty Fortnite, one of the key aspects that the CEO, Madhav Seth, had already boasted about on Twitter a few days ago.

Along with the Realme 3 Pro that takes aim at its mid-range rival, the Redmi Note 7 Pro, there was also an entry-level Realme C2 that saw the daylight at the event today. Here, we discuss the details of both the smartphones

The Realme 3 Pro features a 6.3-inch full HD+ display with dewdrop notch and 2.5D Corning Gorilla Glass 5 layering. On the inside, it derives power from an octa-core Qualcomm Snapdragon 710 SoC coupled with Adreno 616 GPU and 4GB/6GB RAM and 64GB/128GB internal storage with expandability support up to 256GB via microSD card.

The photography domain includes a rear-mounted dual camera setup wielding a 16MP primary sensor with f/1.7 aperture and a 5MP secondary sensor with f/2.4 aperture. One of the sensors at the back is Sony IMX519 same as found in the OnePlus 6T. On the front, Realme 3 Pro tacks on a 25MP selfie snapper with f/2.0 aperture. 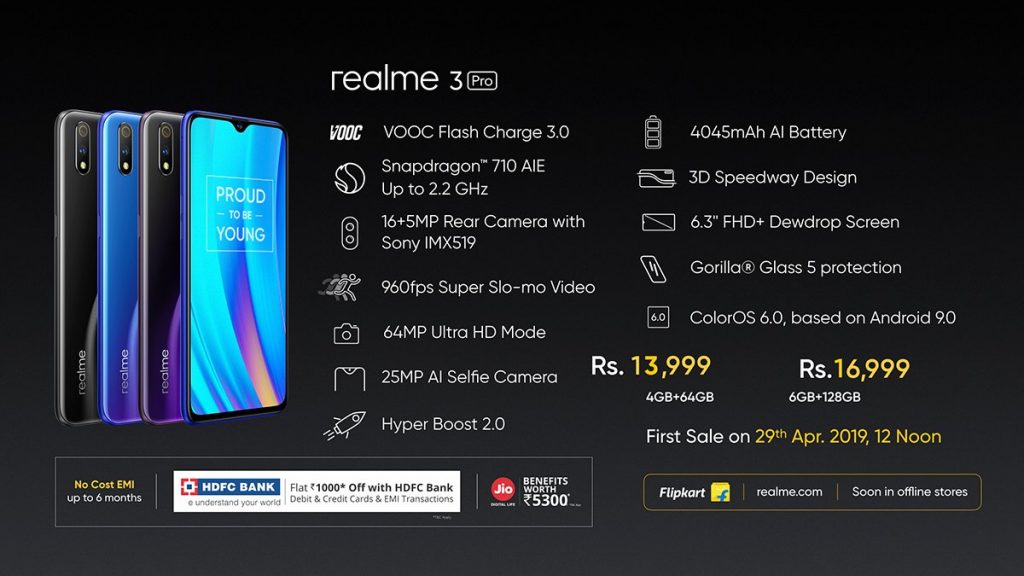 The Realme 3 Pro runs ColorOS 6.0 based on Android 9 Pie out of the box while for juice it is housed with a hefty 4,045mAh battery equipped with VOOC 3.0 fast charging support. Moreover, the device will be bundled with a 20W fast charger. Among other things, the Realme 3 Pro supports 3.5mm headphone jack, rear-mounted fingerprint scanner, micro USB port, dual nano-SIM, and Bluetooth 5.0.

So far the lower rung Realme C2 is concerned it is packed with a 6.1-inch HD+ display with a dew-drop notch. Under the hood, there is a 2GHz MediaTek Helio P22 SoC that pumps power paired with 2GB/3GB RAM and 16GB/32GB default storage.

The Realme C2 rocks a dual camera module on the back comprising a 13MP primary sensor and a 5MP secondary with f/2.2 aperture. Up front, it is fitted with a 5MP selfie camera with facial recognition feature. Realme also touts Slow-mo video recording feature to have graced an entry-level smartphone. The handset boots ColorOS 6.0 underneath Android 9 Pie put of the box and is fueled by an impressive 4,000mAh battery. 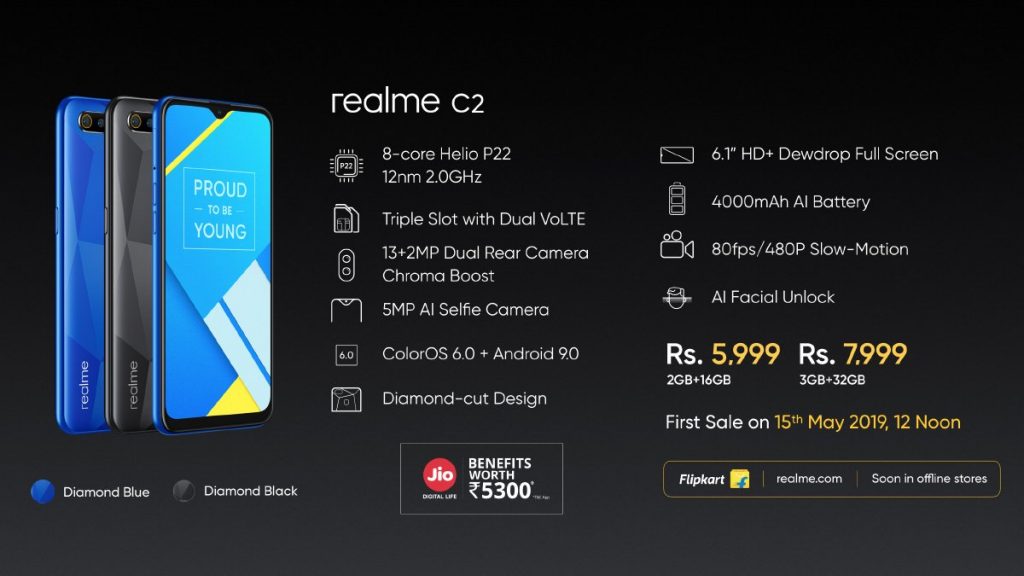 The price for the Realme C2 starts at INR5,999 for 2GB RAM+16GB internal storage while the 3GB RAM+32GB model is set for the INR7,999 price tag. The smartphone will go on sale May 15 on Flipkart and Realme online store.