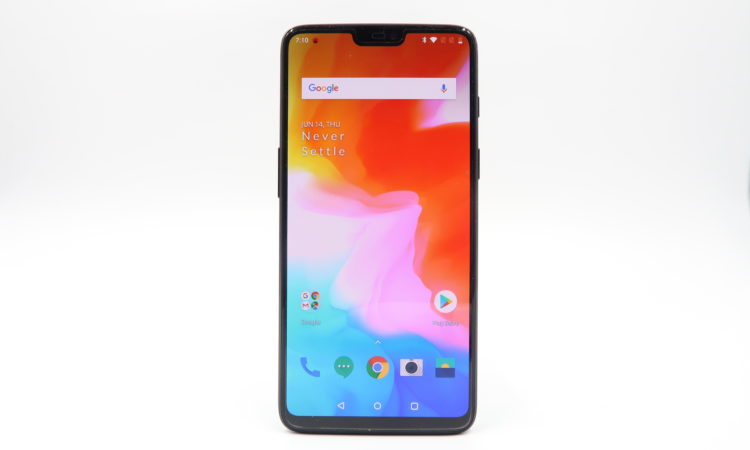 OnePlus launched the OnePlus 6 on 16th May 2018 and the world went gaga over it. And why not? The OnePlus 6 is the best smartphone that OnePlus has launched to date. It comes with a whole new design, a 19:9 Optic AMOLED display, a powerful Snapdragon 845 chipset and more.

The phone runs on OnePlus’s very own version of Android – OxygenOS and you also have the option of installing Android P Beta on the phone. The phone itself is quite amazing and you will read all about it in this review. 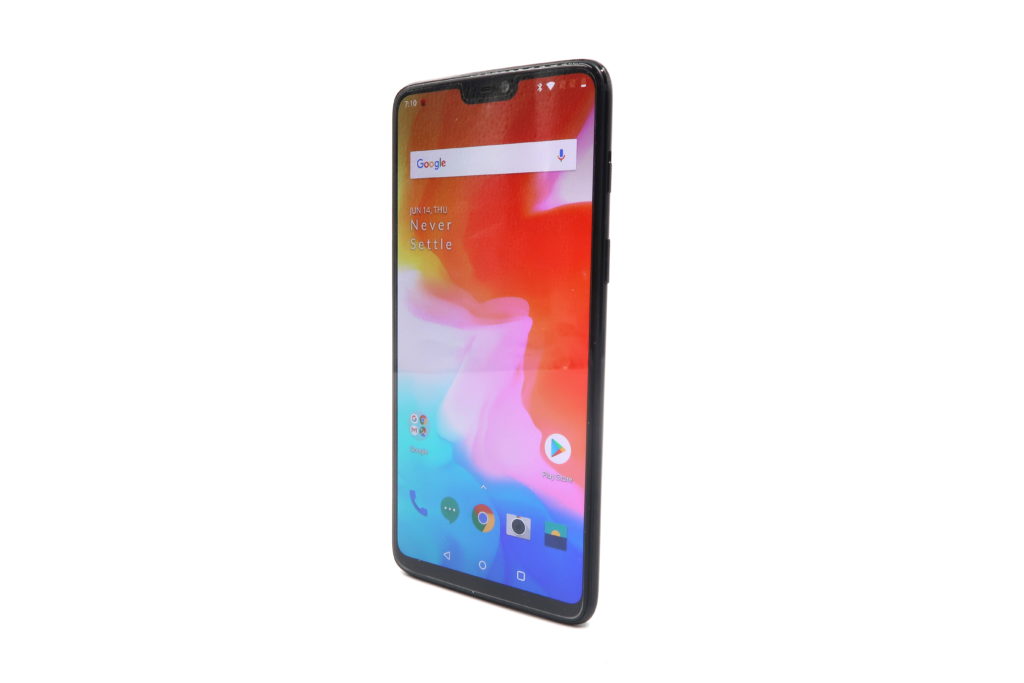 Take the OnePlus 6 in your hands and the first thing that you’re going to see is how well the device has been built. The same stands true for a lot of OnePlus devices that we have already seen, but with a 19:9 display on the phone, OnePlus has done a good job to make the device feel strong and sturdy in your hands.

The front of the phone has a beautiful 6.28-inches, 1080 x 2280 pixels display which covers about 83.8% of the front. There’s a notch on the top of the display which houses the front-facing camera, earpiece, and the sensors. The lower side of the display has a small chin but it’s not really an annoyance. 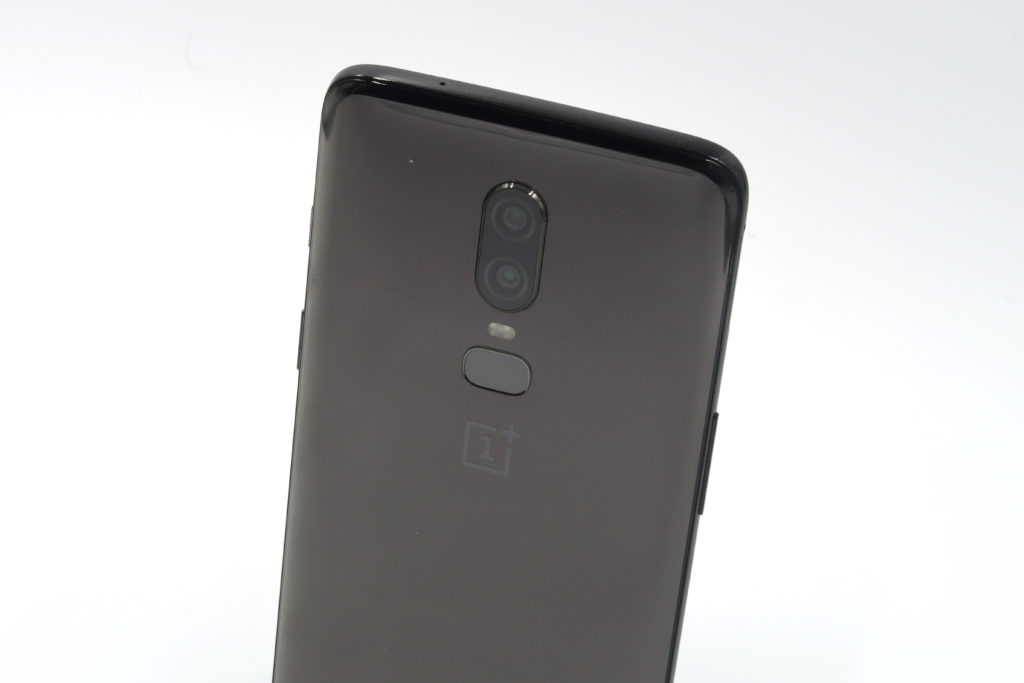 Turn the phone around and you will straight away notice the change in the camera layout and fingerprint sensor. The dual cameras are now aligned vertically in the top mid of the back and below the camera setup, there’s a dual-tone LED flash. The fingerprint sensor’s design has changed from a circular shape to a rounded rectangle shape. The OnePlus logo is housed below all of these things.

The back, as well as the front, are both really minimalistic and they don’t seem loud about the branding of the phone. This is a welcome thing. 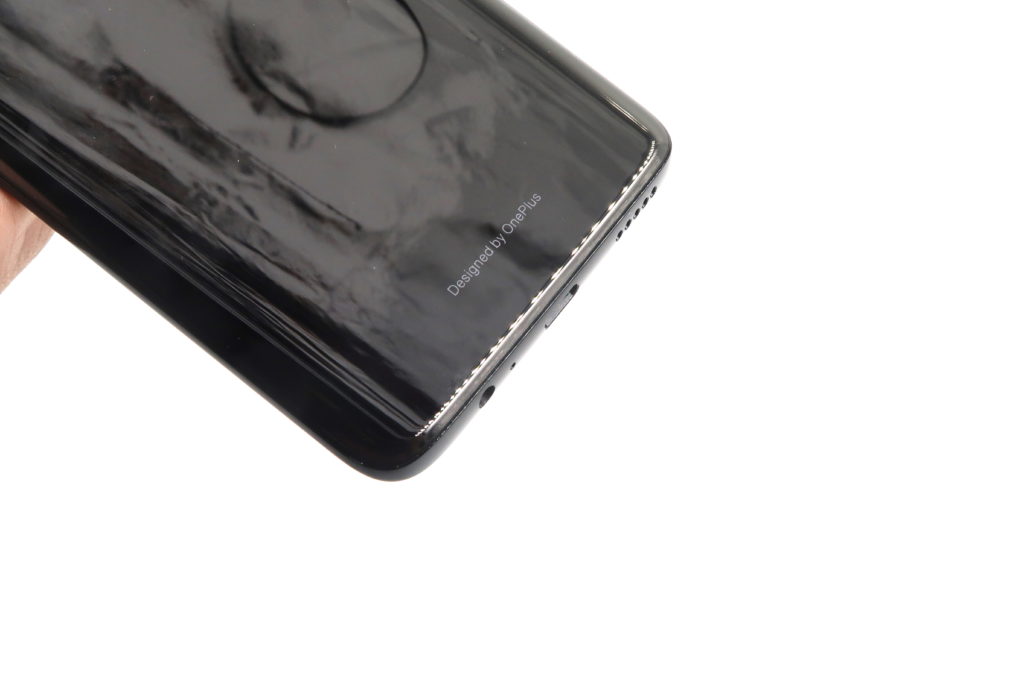 The left side of the phone has the volume rocker and the SIM tray. Coming to the lower side of the phone, you will find the USB type-C port for dash charging and connecting it to a computer. Along with that, there’s also a 3.5mm audio jack which in 2018 is a great thing to see. 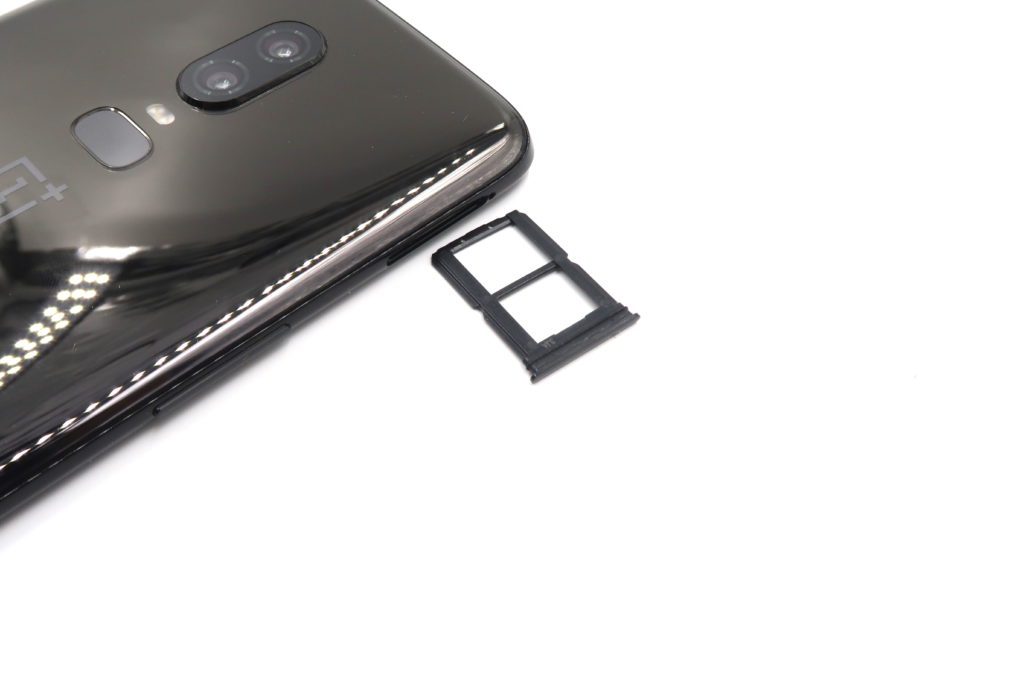 The speaker grill and the microphone are also located on the lower side of the phone. The top side just has a noise cancellation microphone and that’s pretty much it. Overall, the phone feels comfortable to hold and at the same time gives a sturdy in-hand feel.

The display is a 6.28-inch AMOLED screen with a resolution of 1080 x 2280 pixels. This converts into a pixel density of 402ppi. The display can produce 16 million colors and looks very vibrant. OnePlus has decided to call the display an Optic AMOLED display but it has nothing different. It’s a good AMOLED screen and that’s all there is to it. 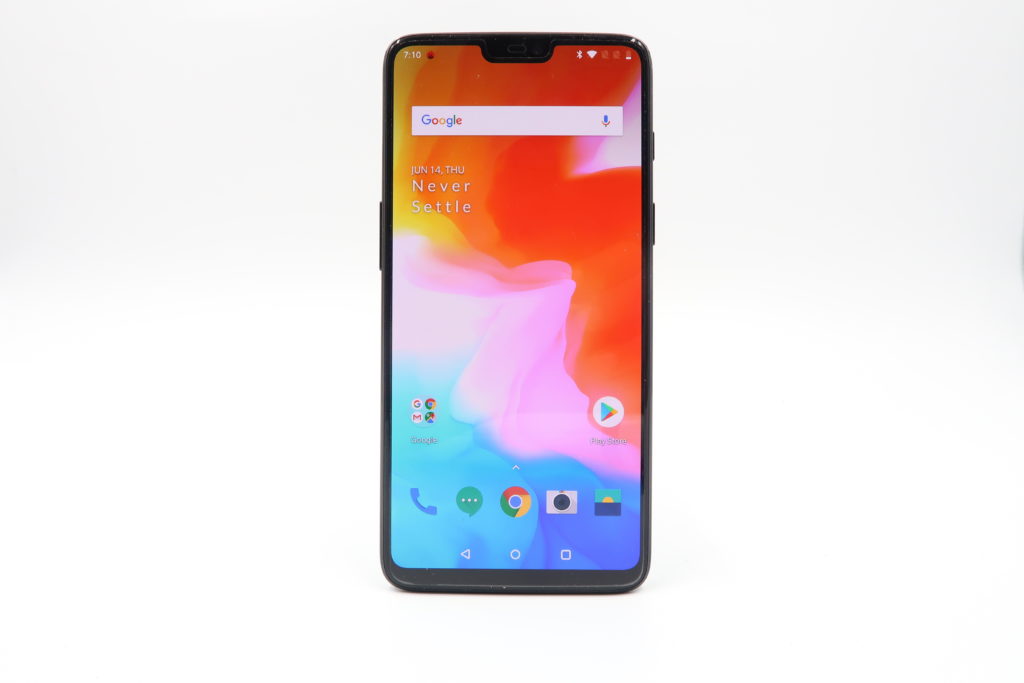 OnePlus is still working with a 1080p+ resolution which is a good thing and also results in great battery life for the smartphone. Maybe we have to wait for the next OnePlus flagship to see an upgrade to a 1440p display?

The display has a maximum brightness of 456nits which is good enough to even see the display in outdoor conditions. The display isn’t bad at all, in fact, it is one of the best screens you will see in any latest flagships out there. 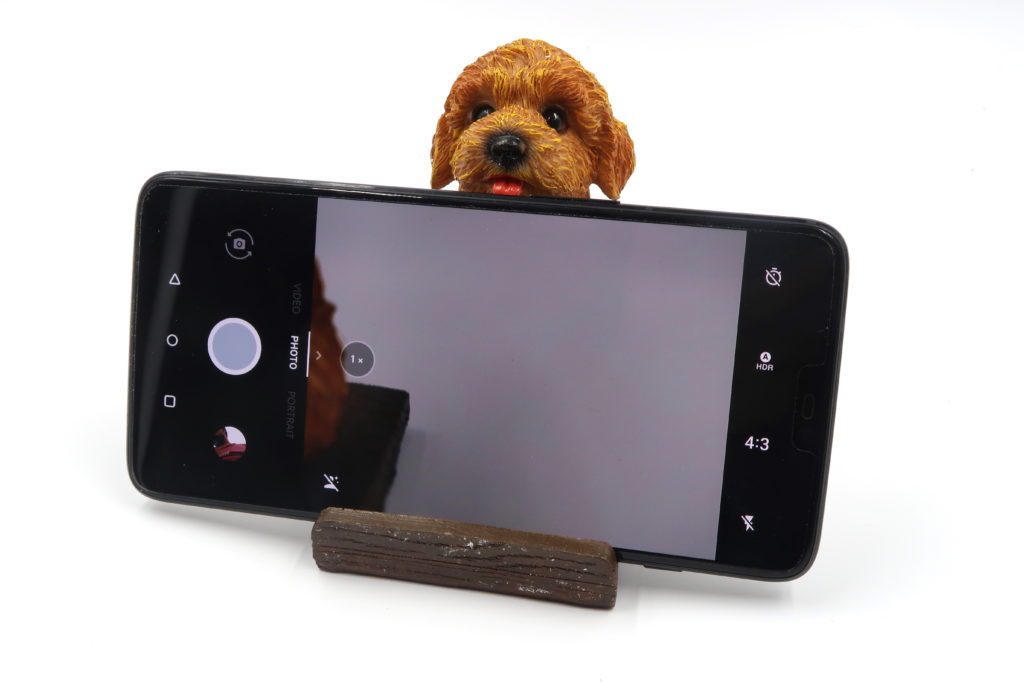 The pixel size has grown by 0.10µm bring it to 1.22µm from 1.12µm on the OnePlus 5T. The primary camera also features OIS and gyro-EIS which is a good thing. Both of these cameras have an aperture of f/1.7 which is good for low light photography.

The front camera is a 16MP shooter and it has an aperture of f/2.0. You also have features like gyro-EIS and Auto HDR for the front camera. The back camera captures decent images but definitely needs improvement, even after getting a recent update which added portrait mode it still needs refinement especially in the portrait mode which doesn’t work well.

The OnePlus 6 comes with a Snapdragon 845 which is the flagship chipset from Snapdragon. The phone is a beast when it comes to performing. It crushes its way through whatever you throw on there and with the help of OxygenOS (current v5.1.6) which is OnePlus’s own flavor of Android 8.1 Oreo, the phone performs really well.

The SD 845 is coupled with an Adreno 630 GPU which can run all types of graphics intensive games easily. 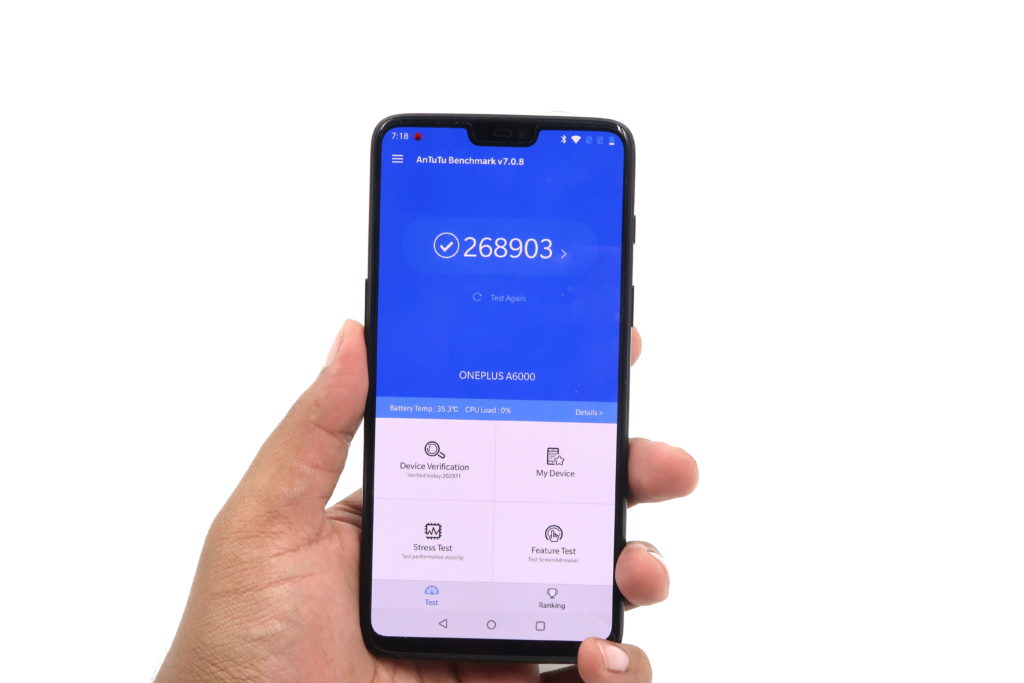 The phone comes with a battery of 3,300 mAh which gives you a good amount of battery life. The phone easily lasts for an entire day even with heavy usage. Even if you are running out of juice mid-day, you can quickly juice it up using the Dash Charger that OnePlus provides with the phone. It is truly one of the best battery charging technologies for smartphones.

The phone runs on OxygenOS 5.1.6 as of writing this review and it comes with a bunch of amazing software-based features. The best part about OxygenOS is that you don’t have to give up the stock Android aesthetic of Android as it is very minimal with a lot of useful features.

For people who can’t stand the notch, you can simply hide it from the settings. The on-screen navigation buttons can be switched for a gesture-based navigation which is a great option to have if you want iPhone X like gestures on your OnePlus 6.

There is also a Face Unlock feature that works surprisingly fast and is quite accurate. But if you want to secure your phone properly and in a more secure manner you can still use the fingerprint sensor to lock your phone.

Always On Display has finally made its way on the phone and it brings an option to either use it or completely disable it if the user wishes to do so.

The OnePlus 6 is a beast and at a starting price of Rs. 34,999 for the 6GB RAM and 64 GB storage, the phone is totally worth it. The phone comes in two different variants. One is the 6GB RAM and 64GB storage option for Rs. 34,999 and the other is an 8GB RAM and 128GB storage option which is priced at Rs. 39,999. While we are losing a few things like expandable storage through SD card, but the onboard storage makes up for it.