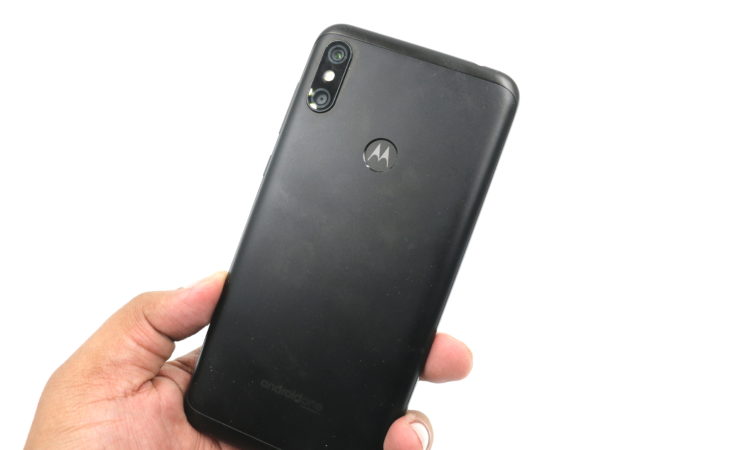 Android One phones in India have been a solid hit with the customers and you have options from the Mi A2, Nokia 3.1, Infinix Note 5 and many others. Motorola One Power is a new addition in the Indian Android One phone market and it is a very impressive phone coupled with great value and price.

You will read about why we think it is definitely one of the best Android One phones to go for in India in this review of the Motorola One Power.

The Motorola One Power doesn’t look like a Moto phone and that is not a bad thing, mind you. The phone has a notch display in the front, a fingerprint sensor with the Moto logo on the back along with a vertical dual camera setup. The phone itself is built out of glass in the front and a metal backplate on the back of the phone. The sides of the phone are built out of Polycarbonate. 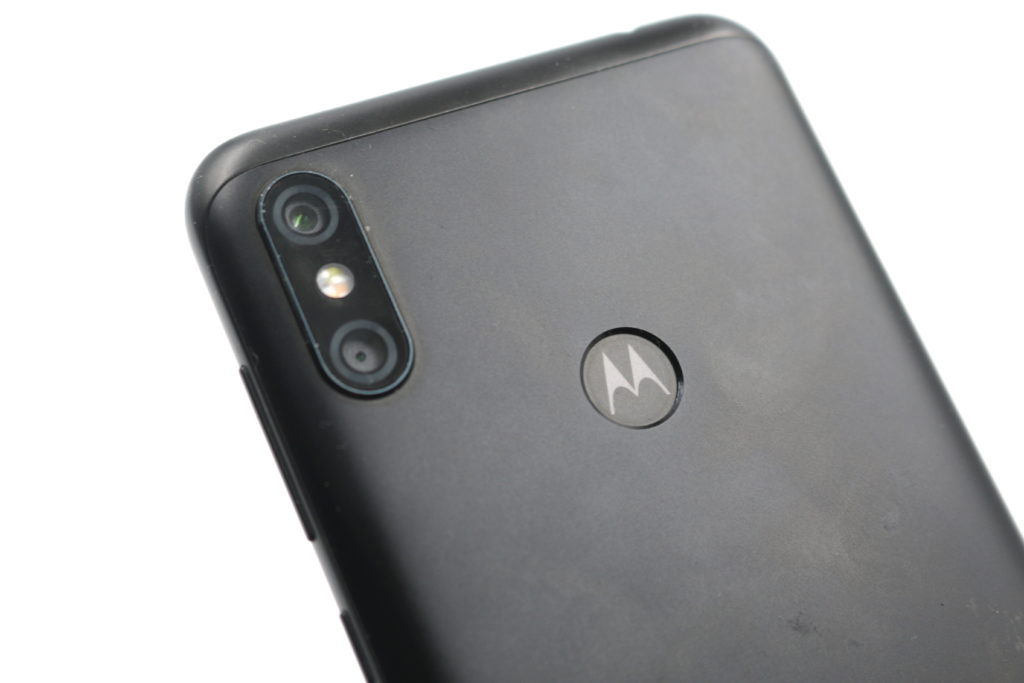 The phone weighs 205 grams and is thick with 9mm of thickness because of the 5000mAh battery that it comes with. It doesn’t feel bulky in your hands but you can feel the weight. In the front, you have a 6.2-inch display with a notch and this is the first Motorola smartphone with a notch display. You will see the bezels on the phone and I think Motorola should have worked on the design to make it stand out from competitive phones like the Mi A2 etc.

On the back, you will find the vertical dual camera set up along with a fingerprint sensor that houses the Moto logo. This is something that Motorola is trying for the first time and it does blend well with the whole Motorola One Power design well. The back of the phone is relatively neat with just an Android One logo on the bottom back side. 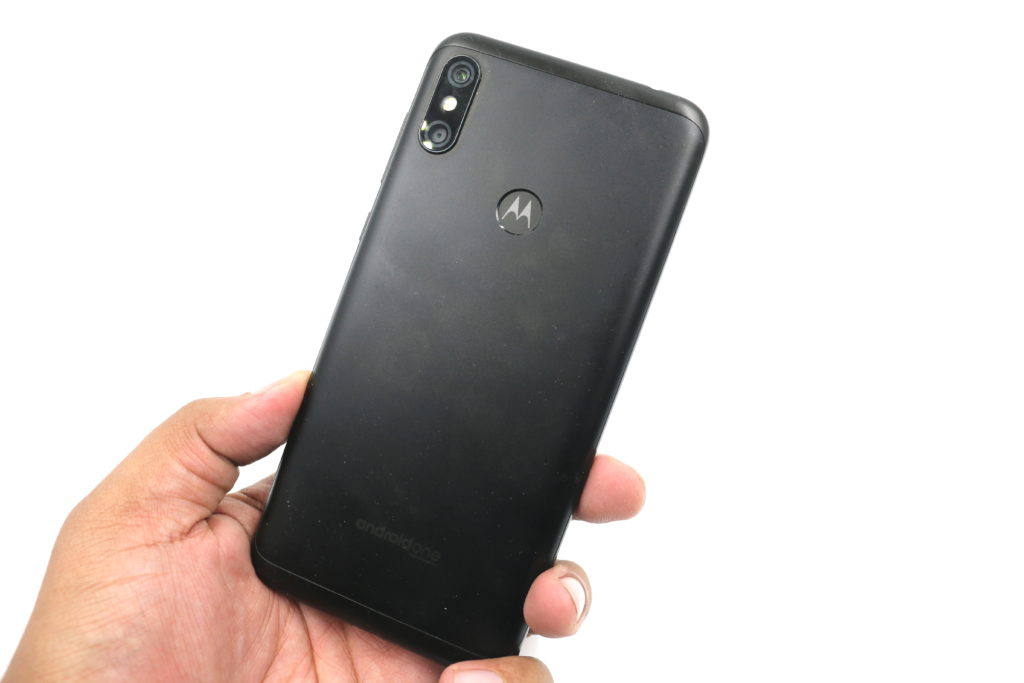 The bottom of the phone has the USB Type-C port along with the 3.5mm audio jack and a speaker grill. The top is empty with just a noise cancellation microphone.

Motorola One Power comes with a 6.2-inch IPS LCD display with an aspect ratio of 18.7:9. The display has a resolution of 1080 x 2246 pixels which results in a pixel density of about 403ppi. The display covers 81.3% of the body which is a good screen to body ratio. But the bezels and the chin are still visible. 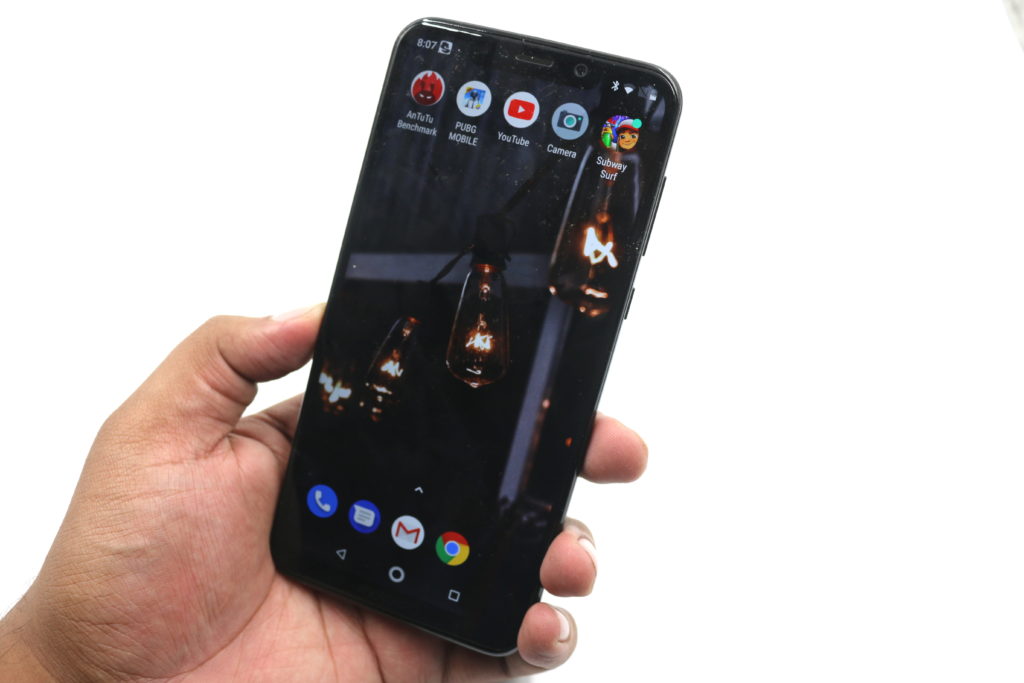 The display has accurate colors and good viewing angles. Media viewing experience on the phone was great and it was able to even HD content from Netflix and Prime Video without any issues, thanks to the Widevine L1 DRM.

Coming to the camera, the phone has a dual camera setup on the back which includes a 16 MP sensor along with a 5 MP depth sensor. In the front, it sports a 12 MP selfie camera with an aperture of f/2.0 and the pixel size is 1.25 microns. Moto has provided their own camera app on the phone that can take Portrait photos and also has an Expert mode. You can control white balance, ISO, shutter speed, focus, and exposure. You also have an HDR mode in the camera.

To capture photos in 16 MP, you will need to switch to an aspect ratio of 4:3. The photos taken in the daylight are decent and capture a good amount of details. The HDR mode can be set to auto which means you can take HDR photos depending on the kind of environment you’re in. 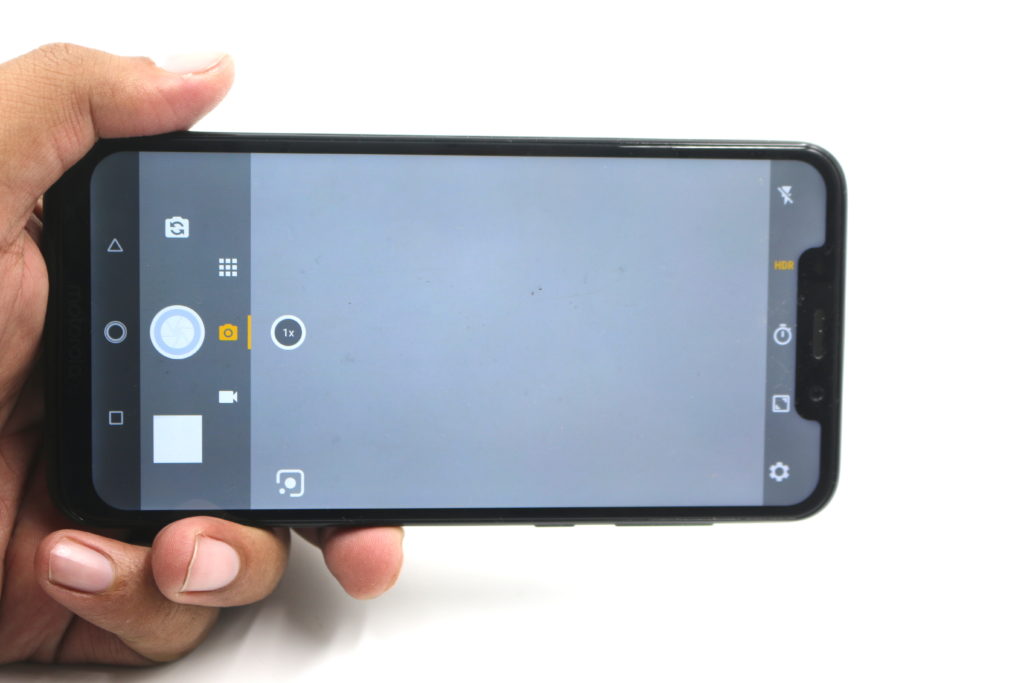 The low light performance is not so good because Motorola’s algorithm tweaks low light images by increasing the ISO which results in the addition of noise. The camera isn’t the best out there to perform low light photography and you can use the Expert mode to set options manually and take slightly better photos.

Coming to the portrait mode photos, the 5MP depth sensor is used to capture the depth in photos and portrait photos taken on the phone did turn out quite nice in terms of edge detection. It is good to see phones getting better with edge detection in portrait shots. The selfie photos also turned out nice and there’s a display flash option that uses the phone’s display as the flash. You also get a beauty mode but sadly there’s no HDR for the front camera.

The Motorola One Power comes with an octa-core Snapdragon 636 processor (Quad-core 1.6GHz + Quad-core 1.8GHz) and you get 4GB RAM and 64GB storage with the phone. You can expand the storage up to 256GB using a microSD card. The phone performed well thanks to the stock Android 8.1 Oreo that it runs on. The Android 9 Pie update will be provided to the phone in the coming time which is a good thing. One thing that the phone misses out on is dual 4G SIM support so only the first SIM is 4G supported and the second SIM will be running on 3G.

The processor combed through the day to day apps easily and the phone didn’t stutter much. Coming to gaming, the phone didn’t have any issues running demanding games like PUBG and by default, the game ran on Low video settings but you can turn it up to Medium and play the game. 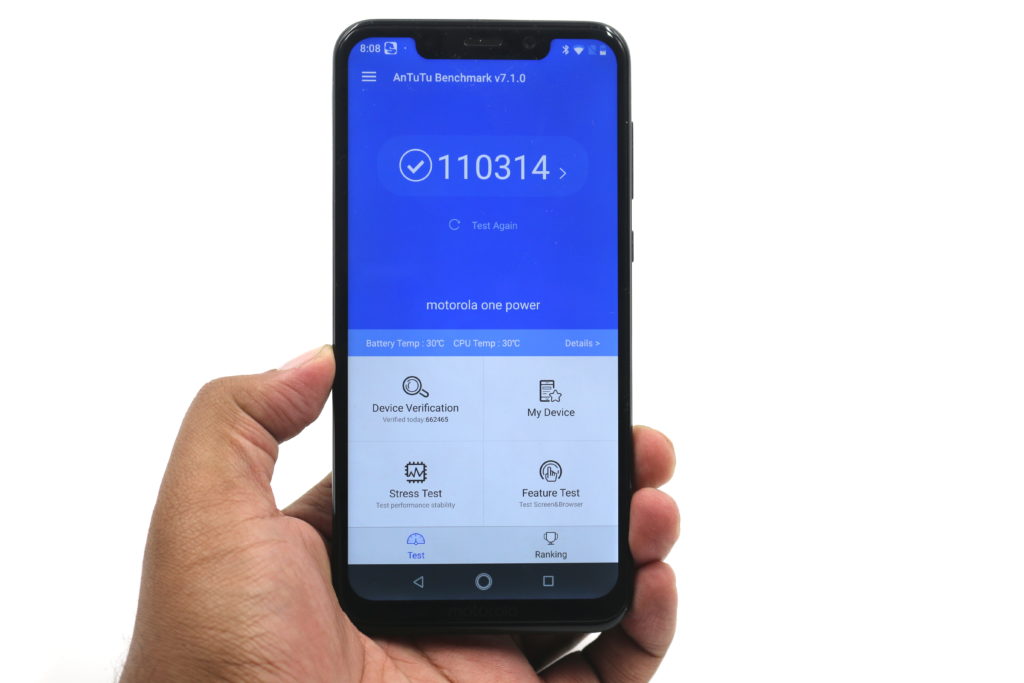 You get a 5000mAh battery in the phone which is huge and gives you a great battery life. Motorola has also gone a step further and added a 15W Turbo Charger in the box for the phone. The phone can be fast charged to 31% in 30 minutes and the full 100% charge takes about 2 and a half hours.

The phone comes with Stock Android 8.1 Oreo and has all the stock Android apps with a few useful additions from Motorola. You have a Moto camera app along with Moto Actions which provides you a bunch of gestures. The phone also supports Moto Display which will light up the phone to show notifications. Dolby Audio has been added to tweak the audio performance on headphones and speakers.

The stock Android experience makes sure that software never becomes a bottleneck on the phone and you have the purest Android experience possible. The UI is just like what you get on any other phone with stock Android and has all the features like split-screen apps etc. One of the many custom features is the Smart SIM feature which is similar to what OnePlus does on Oxygen OS. You can insert two SIM cards and let the software take control of the calls. 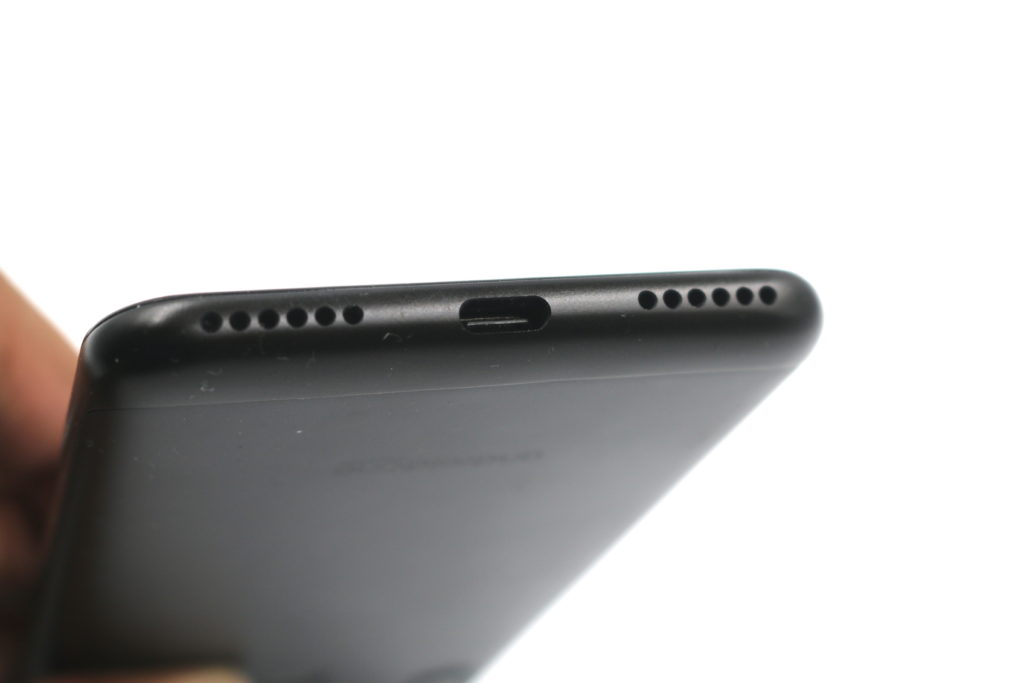 The Motorola One Power is a great smartphone for the price. The fact that it comes with Snapdragon 636, 4GB RAM and a 5000mAh battery means this will cater to a large variety of customers. The price tag of Rs. 15,999 will be perfect for a lot of people who are looking for a great performing phone.

While there are a few trade-offs in terms of camera, the phone still takes good photos if not excellent and expecting anything more from a phone that already gives you so much is kind of asking too much from it. In our opinion, if you are looking for a no trouble smartphone for 1-2 years then this can be a good option.

In our opinion, if you are looking for a no trouble smartphone for 1-2 years then this can be a good option. 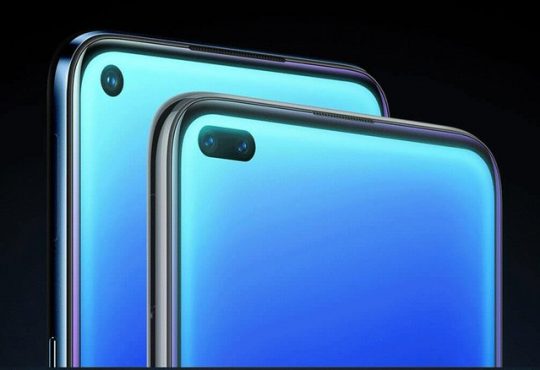