Moto G8 Plus with 48MP Triple rear camera launched in India for 13,999 INR

The Moto G8 Plus comes with mid-tier internal hardware but has much-improved camera loadout and a bigger battery than its predecessor. The phone features a subtle gradient design at the back, which is still made up of plastic material.

The rear camera setup is repositioned to the top left corner instead of central alignment in its predecessor. The iconic rear-mounted batwing Moto logo which also doubles as a fingerprint scanner, however, sits at its usual place.

The front of the Moto G8 Plus features a small U-shaped notch at the middle of the top of a 6.3-inch full HD+ LCD screen. The display comes with 19:9 aspect ratio as well as 400ppi pixel density. 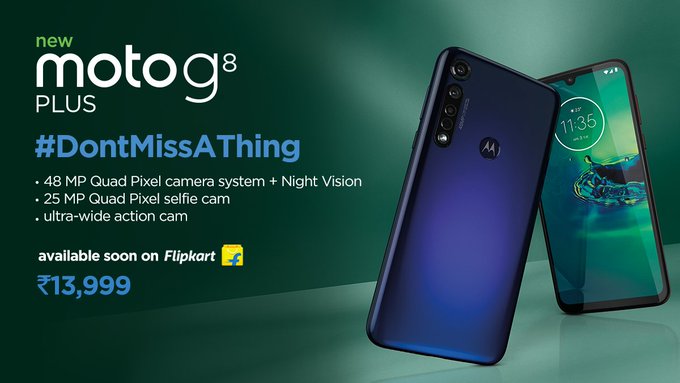 Under the hood, the Moto G8 Plus is driven by the 11nm Qualcomm Snapdragon 665 octa-core SoC which also powers the likes of the Xiaomi Mi A3 and the Realme 5. The smartphone packs Adreno 610 GPU, 4GB RAM, and 64GB internal storage with the latter having the expansion support for up to 512GB via microSD card.

Talking about the camera thing, the Moto G8 Plus scores brawny points here. It attaches three cameras at the back featuring a primary 48MP f/1.79 Samsung ISOCELL Bright GM1 sensor teamed with a 5MP f/2.2 depth sensor and a 16MP f/2.2 action camera with 117-degree field of view same as the one present on the Motorola One Action for vertical video shoots.

On the front, there is a 25MP f/2.2 selfie shooter enclosed inside the notch. As far as the camera features are concerned, they include a dedicated night mode, spot color, 4K video shooting capability at 30 fps, and 1080p slo-mo videos recording at up to 120 fps.

On the software side of things, the Moto G8 Plus runs Android 9 Pie with a little sprinkling of Motorola Experience on top. A 4,000mAh battery which is up from 3,000mAh battery inside its predecessor keeps the phone lit supported by 15W TurboPower charger and USB Type-C port. However, the device also retains the tradition 3.5mm headphone jack.

The Moto G8 Plus will go on sale towards the end of this month via Flipkart priced at INR13,999 for the single 4GB RAM+64GB storage variant. As for the colorways, the smartphone will come in two different shades such as Cosmic Blue and Crystal Pink.