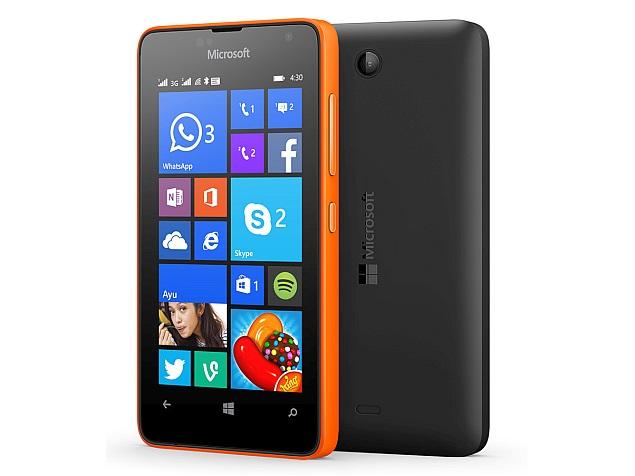 The best part of Lumia 430 Dual SIM is that it can be upgraded to Windows 10 when it becomes available in the later part of 2015.

The phone runs on Windows Phone 8.1 with the Lumia Denim update. It boasts of a 4-inch WVGA LCD display with pixel resolution of 480×800 pixels and a pixel density of 235ppi. It is powered by a 1.2GHz dual-core Qualcomm Snapdragon 200 processor and is supported with 1GB of RAM which means multitasking is not an issue with the device. The phone offers 8GB of 8GB of built-in storage which is expandable up to 128GB via microSD card. Just like other Lumia smartphones, this smartphone also comes with 30 GB of free OneDrive cloud storage.

The phone supports micro SIM card and is a dual SIM phone which features a 2-megapixel rear camera with fixed focus and a 0.3-megapixel front camera. The device is backed up by a 1500 mAh decent battery and weighs only 128 grams. It is a light weight smartphone which measures 120.5×63.19×10.63mm.

The phone also features trademark services of Microsoft which are Microsoft’s Office suite (Word, Excel, PowerPoint, and OneNote), Outlook, Skype, and OneDrive. The phone supports 3G and is priced at INR 5299. The phone will be available from today itself in Bright Orange and Black colour.