But how exactly does the phone stand up in real life? Let us know that in this review of the Micromax Infinity N12.

The Micromax infinity N12 is one of those smartphones that launched with the “notch” display super late in 2018. The front of the phone has a 6.19-inch display with a notch that houses the 16MP front-facing camera and the earpiece for the phone. The notch also houses the LED flash to support the front-facing camera. 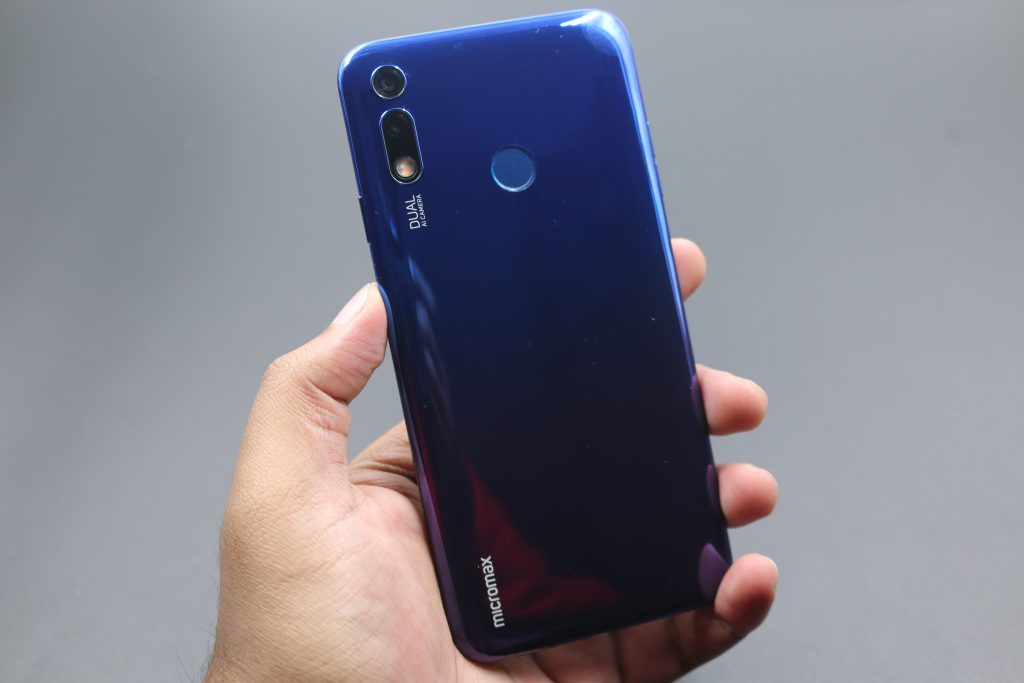 Below the display, you will find a chin which isn’t very slim or thin but it is there anyway. Turning the phone around reveals the dual camera set up along with the LED flash. You will also find the fingerprint sensor on the back. The back has a shiny glossy finish that makes it look amazing.

On the right side of the phone, you will find the power button which also works like a lock and unlock button for the phone. On the left side, you have the volume rocker.

The SIM and micro SD card tray are located on the top edge of the phone and this tray allows you to simultaneously use two SIM cards with a micro SD card.

The bottom of the phone is loaded with a micro USB port and a 3.5mm audio jack. You also have the speaker grill at the bottom for the phone. Micromax definitely has a great looking smartphone but the build quality could have been better. The back of the phone gets scratched easily due to the plastic glossy design. We recommend using a case with the phone.

The display being used here on the Micromax Infinity N12 is a 6.19-inch HD+ IPS LCD display with a resolution of 720×1500 pixels. The aspect ratio of the display is 18.9:9 which means it is a taller display and it is covered by 2.5D curved glass as well. 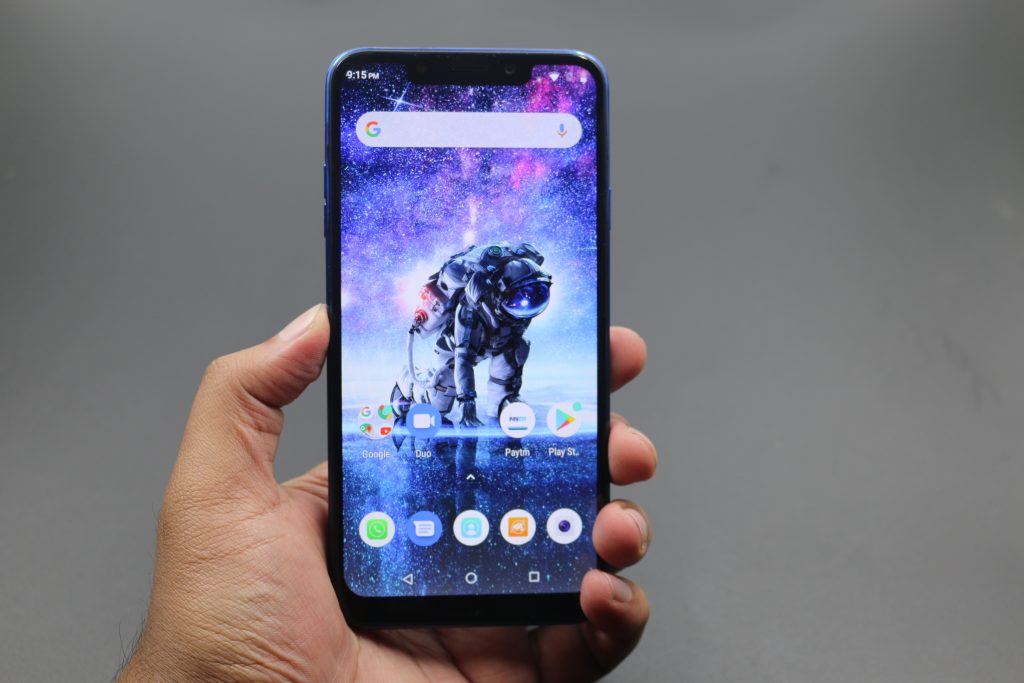 The display has a pixel density of 268.8ppi which is good if not best. The size of the display and the resolution make it a very optimum display in case you want a smartphone with great battery life. It has lesser pixels to power so you will have good battery life.

The display panel itself is quite nice to look at and it shows all the multimedia content nicely.

The Micromax Infinity N12 has a dual camera set up on the back which consists of a 13 MP primary camera and a 5 MP secondary camera that will be used for capturing depth information for portrait photos. This camera set up works average in daylight condition. Low light photos contain noise and need a lot of stabilization for a clear picture.

The front camera on the Infinity N12 is a 16 MP unit with an LED flash for taking selfies in low-light. The selfies taken are OK and they have an average amount of details but the story with low light photos are same as that of the back camera. The LED flash does help for taking photos in low light but still, the quality isn’t that great. The company needs to work more on the Camera and we hope that it gets better with updates. 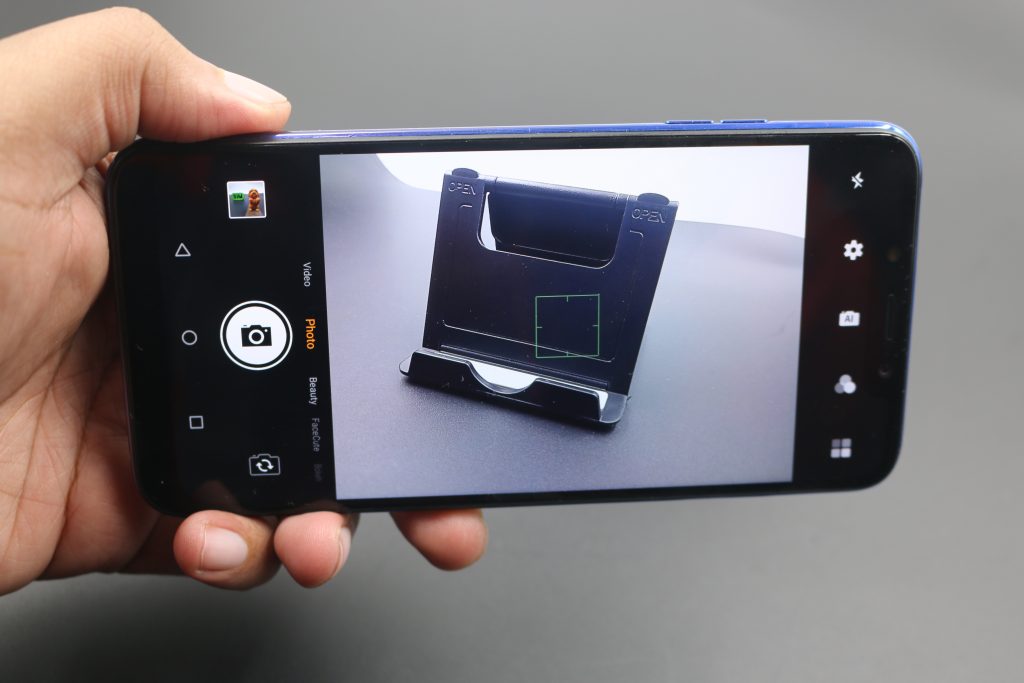 The Infinity N12 comes with 3GB RAM and 32 GB internal storage. For the processor, Micromax is giving a 2GHz Octa-Core MediaTek Helio P22 (MT6762) processor. This processor is coupled with a 650MHz IMG PowerVR GE8320 GPU to process the graphics in games and applications.

This configuration is quite nice for a phone that is going to be used as a utility phone for apps and normal phone call purposes. If you want a phone specifically for gaming, then this smartphone won’t do that good of a job. Yes, it can run games like PUBG but keep in mind that the performance isn’t up to the mark. We didn’t face any lag or issues while running normal apps or entry level games.

The phone runs on Android 8.1 Oreo but Micromax has promised that the phone will receive Android Pie soon. Android 9 Pie does come with amazing improvements but Android 8.1 Oreo was released quite a while ago and now it just feels aged.

Coming to the battery, it has a 4000mAh battery that can easily power the phone for quite a while. One charge will give you enough juice to use the phone under full load for a full day. Sadly, Micromax hasn’t included any type of fast charging so the charging speed will be low.

All in all, for the price, the Micromax Infinity N12 is a good smartphone but it does come with some compromises like the cameras. If you need a big battery smartphone with a decent display and good design then you can consider N12 as an option but if you want a good camera smartphone then you do have other options available in the market.