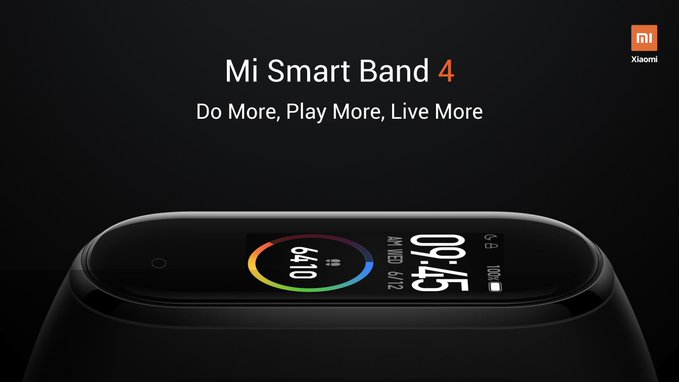 Xiaomi launched the Mi Band 4 in China back in June and now the company has launched the same in India but with a tweak in the name. It calls it “Mi Smart Band 4” maybe because it comes with a few noteworthy up-gradations.

The Mi Smart Band 4 is priced at INR2,229 which is slightly higher than the INR1,999 price of the Mi Band 3. The new fitness tracker will be available starting September 19 on Amazon India, mi.com, and Mi Home Stores across India.

The new band features full-color AMOLED display with 120×240 pixel resolution. The Mi Smart Band 4 uses 5 levels of brightness with a maximum of 400 nits for better legibility in the bright daylight surroundings. A 2.5D tempered glass protects the 0.95-inch display which is about 40% bigger in size than the Mi Band 3.

The Mi Smart Band 4 has improved in monitoring workouts. The new fitness tracker can now track four more fitness activities such as outdoor running, cycling, walking, and pool swimming in addition to other existing activities in the Mi Band 3.

The Mi Smart Band 4 is 5 ATM water-resistant so can track swimming with better strokes recognition as it uses six-axis sensor. Furthermore, the Band 4 comes with Music Control feature which will allow users to control volume or change tracks playing on their smartphones directly from the band.

Xiaomi claims the Mi Smart Band 4 comes with all-new user interface which is more simple and intuitive. Three Watch Faces can be toggled from within the device itself apart from the access to unlimited Watch Faces via Mi Fit App. Also, users can use their pics or any other pics as the Face of the display with the help of setting within Mi Fit App.

Amongst other things, the Mi Smart Band 4 gives instant call alerts and app notifications, monitors sleep patterns, check heat rate 24/7 with more accuracy than before, shows the 5-day weather forecast, and more. The band comes with five different colored straps which are also compatible with the Mi Band 3. The battery last up to 20 days same as the Mi Band 3.

The Mi Smart Band 4 will aim at the Honor Band 5 which launched earlier last month in the Indian market for a price of INR2,599.