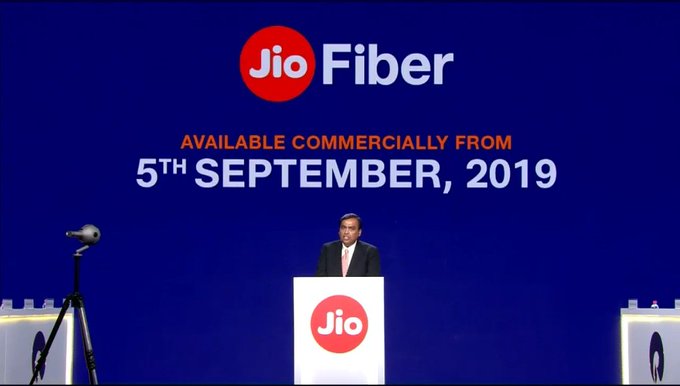 In a move that is viewed as disruption in fixed-line broadband space, Reliance Jio today launched its much-awaited JioFiber broadband service at the company’s 42nd annual general meeting.

The service comes with the base price of INR700 where users can get 100Mbps speed with the top-tier plan going up to INR10,000 for 1Gbps speed.

JioFiber will be commercially available from September 5, which will mark the third anniversary of the Jio services.

The JioFiber initially named Jio GigaFiber was in beta for last one year with over 5 lakh users testing it. Notably, even before the commercial rollout of the service Reliance had received up to 15 million registration for JioFiber broadband connection.

JioFiber will be available at different price points for home and business users. Apart from the INR700 base plan for up to 100Mbps speed and INR10,000 top-tier plan for up to 1Gbps speed the details of the other plans remain unknown at this moment. Jio will reveal those plans next month at the time of the commencement of the service.

Reliance Jio also launched JioPostPaid Plus, a special mobility service, where subscribers will get priority SIM-setup service at home including a home visit by Jio staff to move the connection to Jio. Besides, the JioPostPaid Plus offers seamless voice and data connectivity across all devices, affordable family packs, cheap international roaming rates, etc. 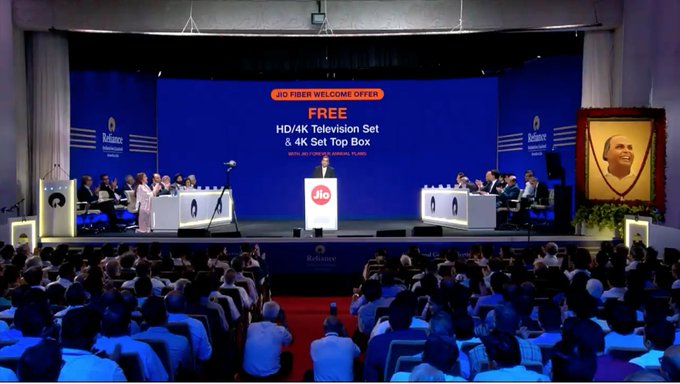 Moreover, Reliance JioFiber subscribers will get a complimentary free landline phone (Jio Home Phone) with free calling facility for a lifetime along with low-cost landline international calling. Jio has launched an INR500 per month plan for unlimited calls to the US and Canada for now.

The Jio-Fiber broadband service comes with subscriptions to the popular OTT apps. Most interestingly, the Jio has launched a Jio First-day-first-show facility for JioFiber subscribers by which the users can watch select movies on their TVs/home devices on the release date itself.

With whopping 15 million registrations already received for the JioFiber broadband service, Jio now aims to penetrate 20 million residences and 15 million business establishments across 1,600 towns as against the target of 1,100 towns last year.