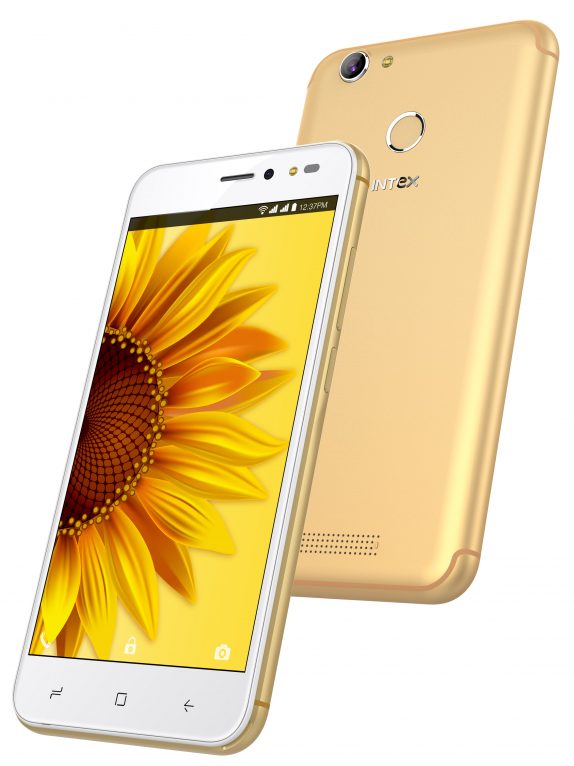 Domestic smartphone maker, Intex has today unveiled its latest smartphone Intex UDAY which will be available in Black, Blue and Champagne color options for the price of 7,499 INR. This handset will be available only on leading retail outlets of Pune including Kensha Mobiles, Mehta Telecom, Manik Mobile Shopee and The Corner Mobile.

Intex UDAY includes a 5.2 inch HD display and is powered by 1.3 GHz quad core MediaTek processor. It packs a 13 MP auto focus rear camera with LED flash light and a 5 MP front camera which also comes with LED flash light. It also has a fingerprint scanner mounted on its rear.

This dual SIM smartphone has 3GB of RAM and 32GB of inbuilt storage that can be further expanded by up to another 128GB with microSD card slot. There is 2800mAh battery and runs on Android 7.0 Nougat OS, connectivity options include 4G VoLTE, Wi-Fi 802.11 b/g/n, Bluetooth 4.2, GPS + GLONASS, Micro USB port and 3.5mm audio jack.

Commenting on the launch of Intex UDAY with leading retail chains in Pune, Nidhi Markanday, Director, Intex Technologies said, “With the focus on further strengthening hold in key regional markets, Intex is delighted to have partnered with  4 leading mobile retailers in the city. We are sure the group’s vast retail network in Pune city, business acumen and huge presence will have a rub-off effect in adjoining micro markets  and will prove to be a game changer for Intex’s strength and efforts for consumer connect in Tier 2 & 3 markets.”