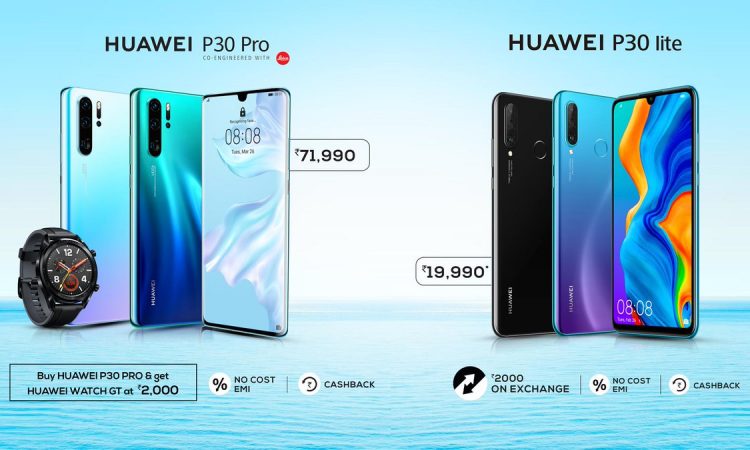 Besides a vigorous boom in the mid-range smartphone segment in India the niche premium segment has also seen an uptick in recent years. And since Huawei is one of the key players in India it has now launched its premium flagship, the Huawei P30 Pro in the country which first debuted last month in Paris along with the regular Huawei P30.

However, the Huawei P30 didn’t make the cut for an India release. Instead, the Huawei P30 Lite a pared-down version of the latter, aimed at the mid-tier segment, has made its way to the Indian market, accompanying the premium Huawei P30 Pro.

Starting off with the Huawei P30 Pro, it is only launched in one variant with 8GB RAM and 256GB internal storage configuration. Priced at INR71,990 the smartphone features a 6.47-inch full HD+ OLED panel and is powered by 7nm HiSilicon Kirin 980 SoC with storage expandability up to 512GB.

The camera being the main draw of the P30 Pro, it mounts a quad-camera setup at the back. The rear camera module comprises a 40MP primary sensor, a 20 MP ultra-wide-angle sensor, and an 8MP telephoto sensor with a Periscope lens offering up to 5x optical zoom, 10x hybrid zoom and up to 50x digital zoom. There is also a Time of Flight (ToF) camera in tow for depth sensing purpose. Up front, the device sports a 32MP sensor underneath the U-shaped notch. 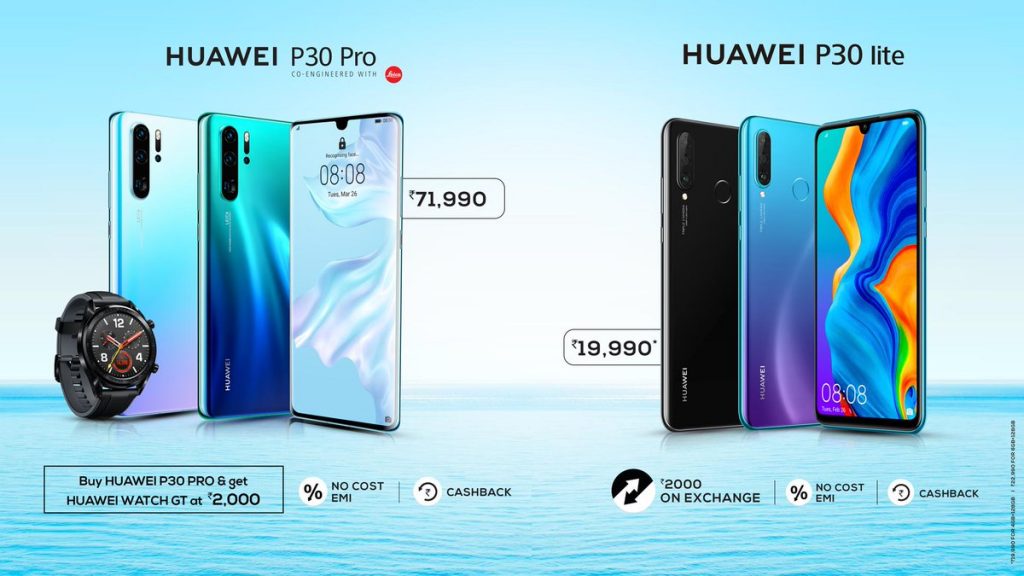 On the other hand, the Huawei P30 Lite is a mid-range offering with slightly curtailed specifications. Unlike the Huawei P30 Pro, it is launched in two variants in India. The 4GB RAM+ 128GB internal storage variant is priced at INR19,990 whereas the 6GB RAM and 128GB default storage model costs INR22,990.

The Huawei P30 Lite is fitted with a smaller 6.15-inch FHD+ LCD display with 19.5:9 aspect ratio. On the inside, it derives power from a proprietary Kirin 710 SoC with storage expandability support up to 256GB via microSD card.

It comes with IP53 certification for splash resistance and misses on in-display fingerprint scanner in support of a rear-mounted fingerprint sensor. The P30 Lite runs Android Pie underneath EMUI 9.1 skin on the software side. A 3,340mAh battery with 18W Quick Charge and USB Type-C support keeps the device ticking.

For the optics, the Huawei P30 Lite sports a triple-camera setup at the back, comprising a 24MP primary sensor, an 8MP sensor with an ultra-wide-angle lens, and a 2MP depth sensor. The front is laced with a 32MP selfie shooter well integrated into a water-drop notch.

Both the smartphones will be available on Amazon India and Croma stores. The Huawei P30 Pro will go sale on April 15 for Amazon Prime customers and April 16 for regular customers. The Croma store availability, however, will commence from April 19.

The Huawei P30 Lite, on the other hand, will be available for purchase on Amazon India from April 25 and April 26 for Prime and regular customers respectively. It will, however, hit Croma stores, not until early May.

In terms of colors, the Huawei 30 Pro will be available in Aurora and Breathing Crystal color options while the Huawei P30 Lite will come in Midnight Black and Peacock Blue paint jobs.