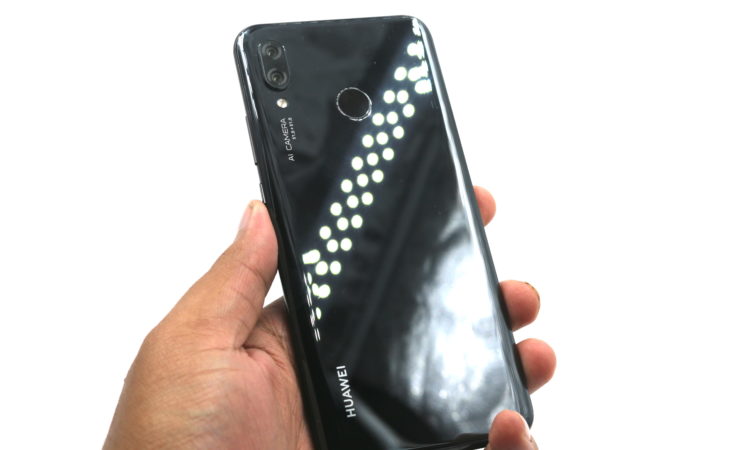 Believe it or not, but Huawei has overtaken Apple and is now placed in the second position for the number of smartphones shipped in Q2 2018. This is huge for a company that is only limited to a few countries and hasn’t touched the soils of bigger markets like the United States. The reason for this is the number of smartphones the company has been launching under the Huawei and Honor brand name. But this data is irrelevant because it does not relate to the smartphone we are reviewing today.

The Huawei Nova 3 was launched back in July along with its younger sibling, the Huawei Nova 3i. The Nova 3 boasts of quad cameras and the phone has dual camera setup both at the back and the front of the phone. With other flagships like Huawei P20 Pro in India, Huawei has been releasing phones targeted towards different audiences which means the company has different phones with the same configuration at different price points. But let us ignore that fragmentation and focus on the Huawei Nova 3 review and see how it holds up in real-world usage.

When it comes to designing smartphones, Huawei has one of the most creative people on their teams responsible for developing amazing looking designs. The Huawei Nova 3 isn’t any different and the phone looks beautiful. It has thinner bezels, a taller screen, amazing color variants and a great build quality. The new quad camera system has also given Huawei a lot of things and design choices to play with and thankfully the company has arranged everything in a manner that builds a beautiful phone. 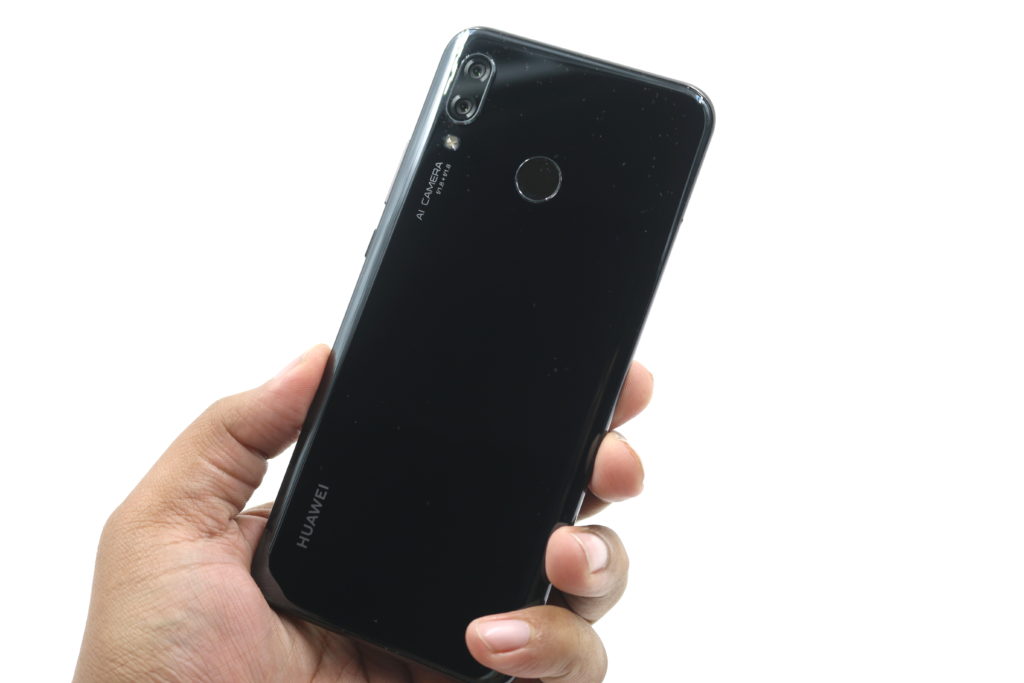 In the front, the Huawei Nova 3 has a 6.3-inch display with a notch that houses the dual front cameras and the infrared blasters. The screen takes up for about 84.2% of the screen-to-body ratio which is one of the highest amongst smartphones. The display is rounded on the corners and apart from the display, the front is pretty much clean and has no branding whatsoever. Even the chin under the display isn’t big and can easily be ignored while using the smartphone.

The rear side of the smartphone is also minimal with the dual camera setup on the left side of the back and below the cameras, you will find the LED flash. The fingerprint sensor is kept in the usual top middle part of the device and the only branding on the smartphone is below the camera and LED flash combo. The back looks very clear and with the color variant that you go for, the back produces great looking reflections thanks to the glass on the back.

The right side of the phone is populated with the power, lock and unlock button along with the volume rocker. Huawei has provided a textured power button to make sure that it stands out from the volume rocker. The buttons are made out of metal and they have a satisfying tactile feel to them when clicked. The left side of the phone houses the hybrid SIM tray which you can use to insert two nano SIM cards or one nano-SIM card with a microSD card. 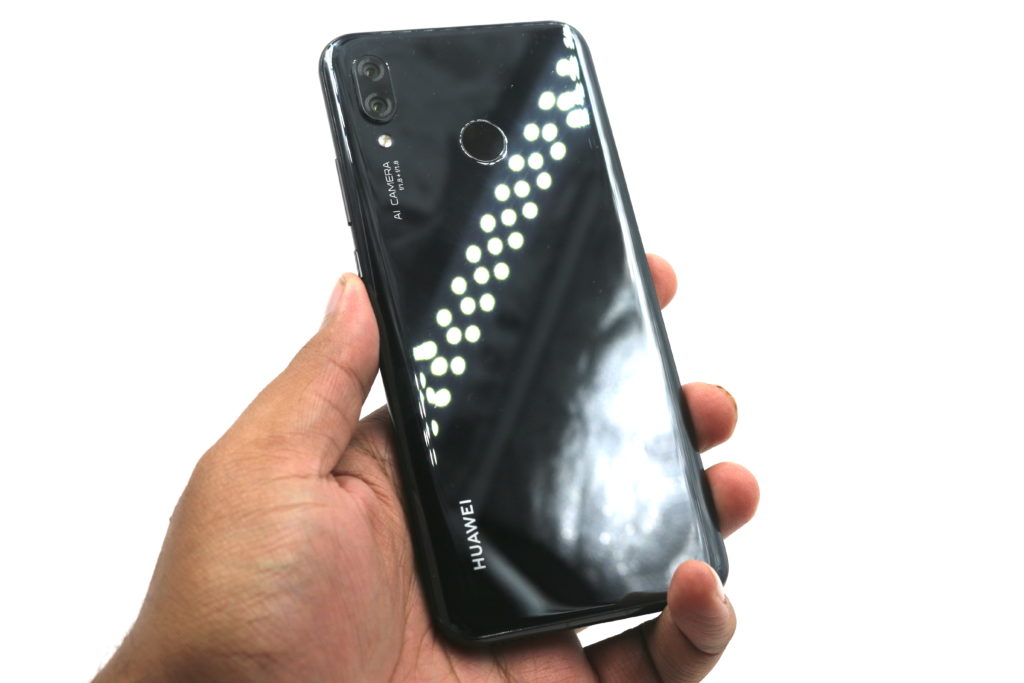 The bottom of the phone houses the USB Type-C port along with a 3.5mm audio jack and a speaker grill. You will also find a tiny microphone hole at the bottom. This pretty much sums up the looks and placements of the buttons and everything on the phone.

The Huawei Nova 3 has a 6.3-inch IPS LCD display with a resolution of 2340 x 1080 pixels and this converts to an aspect ratio of 19.5:9. The display is tall and looks great. The IPS panel being used on the phone can produce really nice looking colors while maintaining good viewing angles. Since this is an IPS LCD display, the contrast on it isn’t as good as that on a Super AMOLED panel. 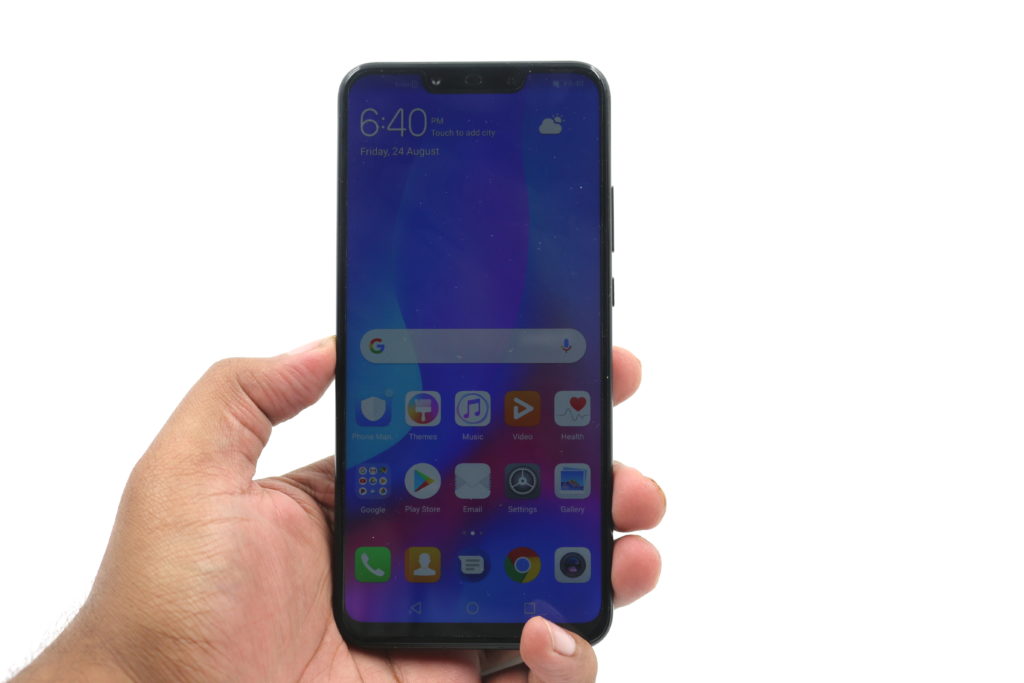 Huawei has provided settings on the phone so that the user can tweak the display as per their liking and the users can change the color temperatures, and modes depending on what they prefer. The display has a pixel density of about 409 ppi which means the display looks great and doesn’t show isolated pixels even when you hold the phone close to your eyes.

The Huawei Nova 3 has quad cameras as its biggest selling point. It has a dual camera setup on the back as well as the front. Huawei has went ahead and added two cameras in the front out of which, the primary camera has a 24MP sensor with an aperture of f/2.0. The secondary camera has a 2MP sensor and will be used specifically for measuring depth. Huawei has already tried this with the Honor 10 but we need to review this setup with an open mind. 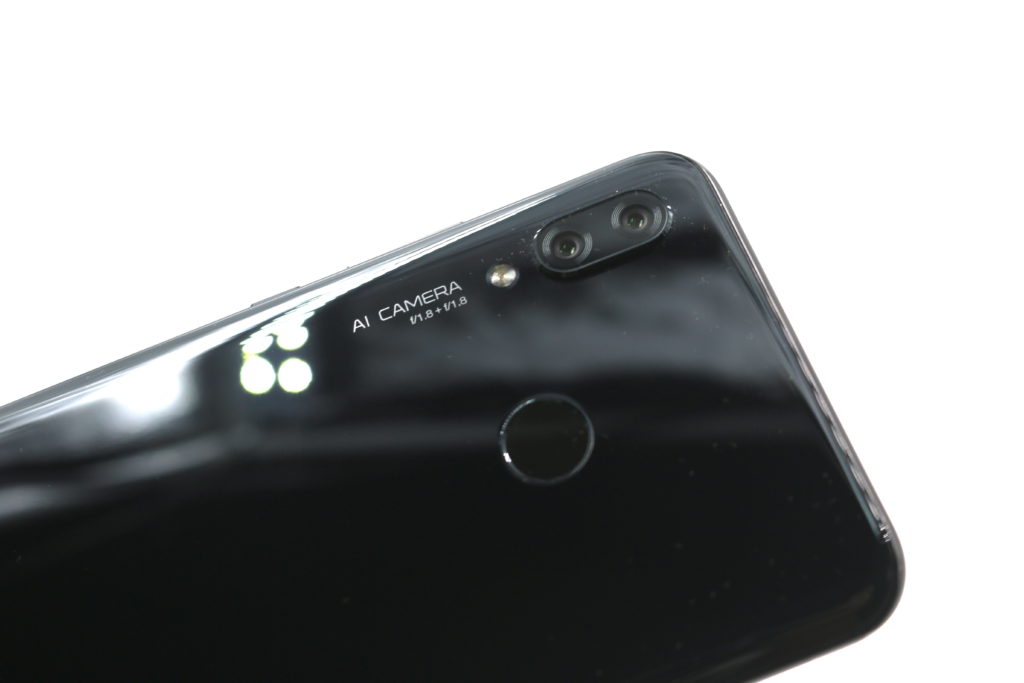 The dual camera setup on the back of the phone consists of a 16MP sensor with an aperture of f/1.8 with a secondary camera of 24MP which also has an aperture of f/1.8. The rear camera setup can capture good-looking photos but when the AI mode is enabled, the images come out to be a bit oversaturated which some users might like as you don’t need to add any filters while sharing it on social media.

The AI mode is on by default and you need to disable it manually if you want to capture photos without using the AI. In the daytime, the photos come out to be great and have a good level of details and colors.

Coming to low light, the camera is able to perform really well and the secondary monochrome sensor adds a lot of details to photos taken in low light. The AI mode works really well when it is used in low light and you can capture photos with a good amount of details and high dynamic range even when it is completely dark.

Talking about the portrait mode, the dual cameras can take good portrait photos and they have a shallow depth of field which makes the photo look a lot like photos taken from a DSLR instead of artificially blurring the background using the software. The portrait mode struggles in low light but when it comes to performing in natural light, it works well. 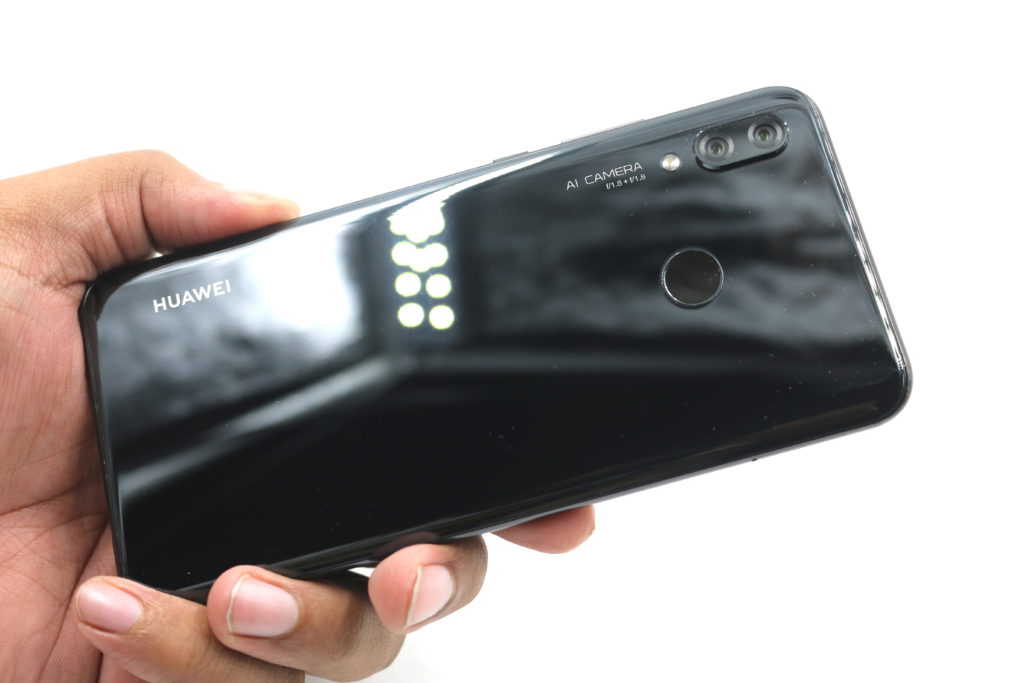 The front has a dual camera setup with a primary 24MP sensor with f/2.0 aperture which is coupled with a 2MP secondary sensor which is used to measure depth. The selfies taken with these cameras are great and they look good. The colors are vibrant and they have a good amount of detail for sure.

Huawei Nova 3 runs on EMUI 8.2 and under the hood, the phone runs on Android 8.1 Oreo. The EMUI skin is actually a lot different when you compare it to stock Android and Huawei has added a bunch of extra features with the skin that are baked into the OS that runs on the phone.

Having EMUI 8.2 on the phone also lets you use the infrared blasters in the notch of the phone for face detection which is otherwise not a native feature of Android. Other features include gesture support, extra settings to tweak the display and more. By default, you will find a bit of a bloat on the phone out of the box but Huawei allows you to uninstall whatever you don’t need.

The performance of Huawei Nova 3 is great and it is powered by a HiSilicon Kirin 970 processor which is coupled with 6GB RAM. The same HiSilicon Kirin 970 is also present in other flagships like P20 Pro and more. The gaming performance is great thanks to the Mali-G72 MP12 GPU. The phone also has an i7 co-processor and an NPU to support AI. You can enable GPU Turbo on the phone to get better performance while gaming.

The Huawei Nova 3 has a 3750mAh battery which can be charged with Huawei’s own SuperCharge charging. The 3750mAh battery can easily power the phone and you can get over 5 hours of screen on time easily. The EMUI 8.2 skin also works in order to save battery by freezing apps in the background. You can disable this nature of EMUI 8.2 but it is turned on by default. 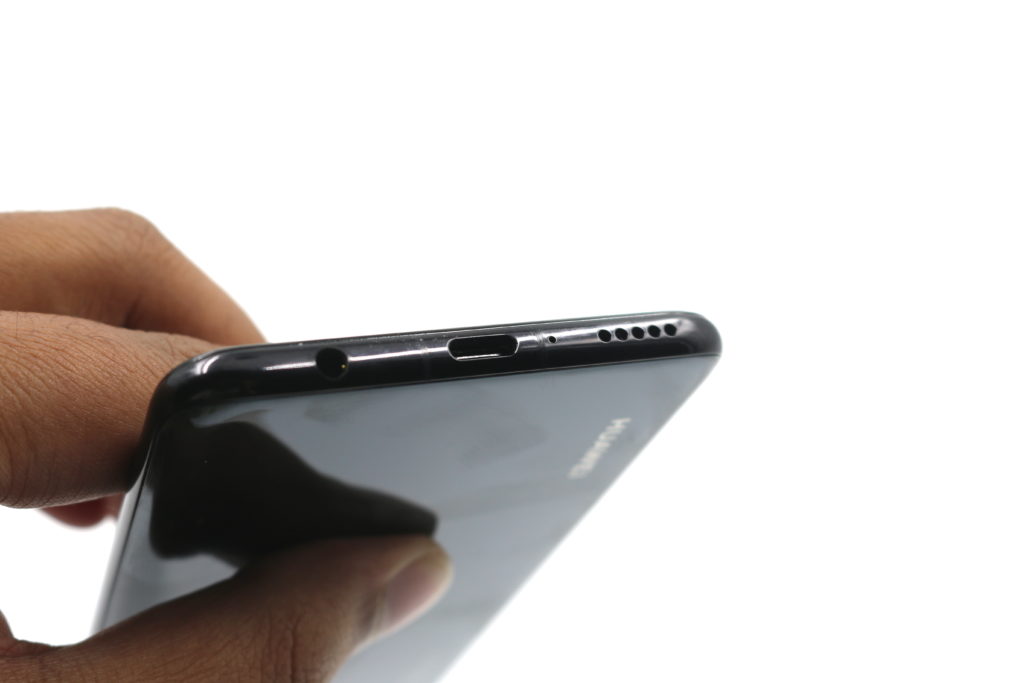 The phone can be charged from zero to 100% in just two hours and in 30 minutes you can get 25% juice. The charging feature is OK but not as good as OnePlus 6’s Dash Charging which overshadows a lot of fast charging technologies out there.

The Huawei Nova 3 is a great camera phone. It comes with quad cameras, but to be honest, the cameras work better when you turn the AI mode off and use the main camera to capture images naturally. The AI feature, however, assists you when you want to capture photos in low light. The phone can also perform well and can run games easily but with so many smartphones from Huawei and Honor out there running the same processor, which one should you get? Well, Nova 3 is a good choice if you’re a Huawei fan and want a phone with a great camera.