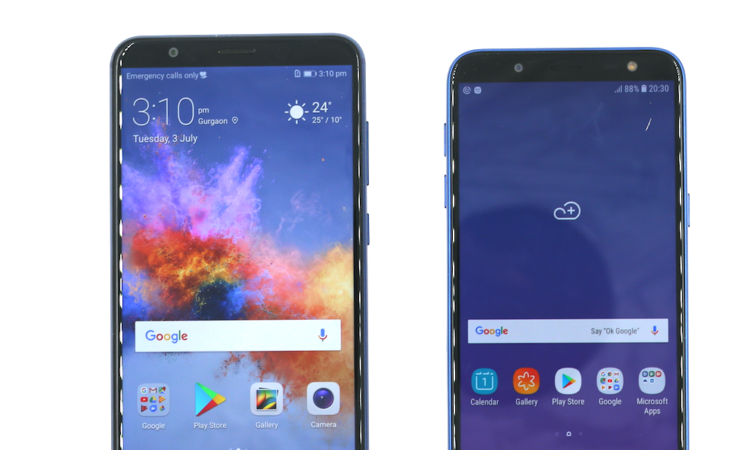 Both of these smartphones have a good build quality and they feel solid when you hold them in your hands. The Samsung Galaxy J6 is made out of plastic but it is a unibody design which supports the 18.5:9 infinity display that the phone has to offer. The phone has a clean front with the infinity display, earpiece, front facing camera and the front LED flash above the phone’s display and that’s about all you are going to see in the front part of the phone. 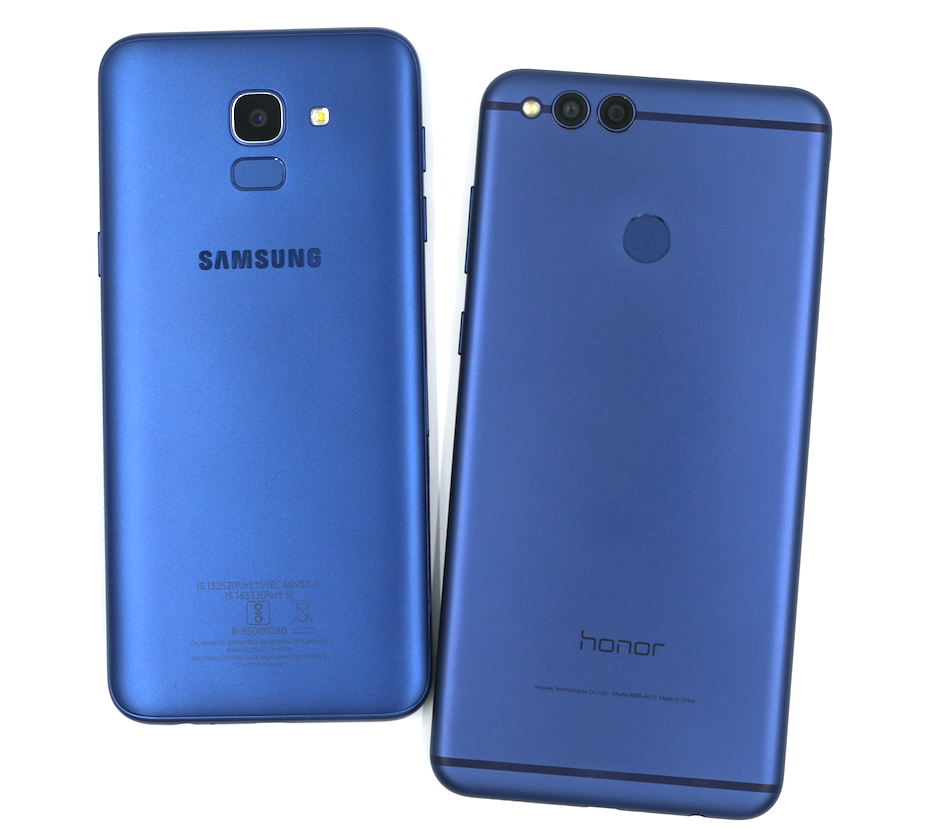 The Honor 7X, on the other hand, is made out of metal and has a metal unibody design which definitely feels better than the Galaxy J6. The phone also has a weight to it due to the metal build but the weight makes it feel more sturdy and premium. You have an 18:9 display in the front and above the display, you will find the earpiece, the sensors, and the front camera. The bottom chin on the front houses the Honor logo.

If you have to choose a phone based on design & build quality, you should go for the Honor 7X since it comes with a more sturdy metal unibody and has a good design as well.

The Samsung Galaxy J8 (2018) comes with a 5.6 inches Super AMOLED 18.5:9 display with a resolution of 720 x 1480 pixels. This converts to a pixel density of 294 pixels per inch. Since the screen is Super AMOLED, the display is very vibrant and can produce really good colors. Samsung chose the 720p Super AMOLED panel to keep the prices in check with the Samsung Galaxy J6 2018. 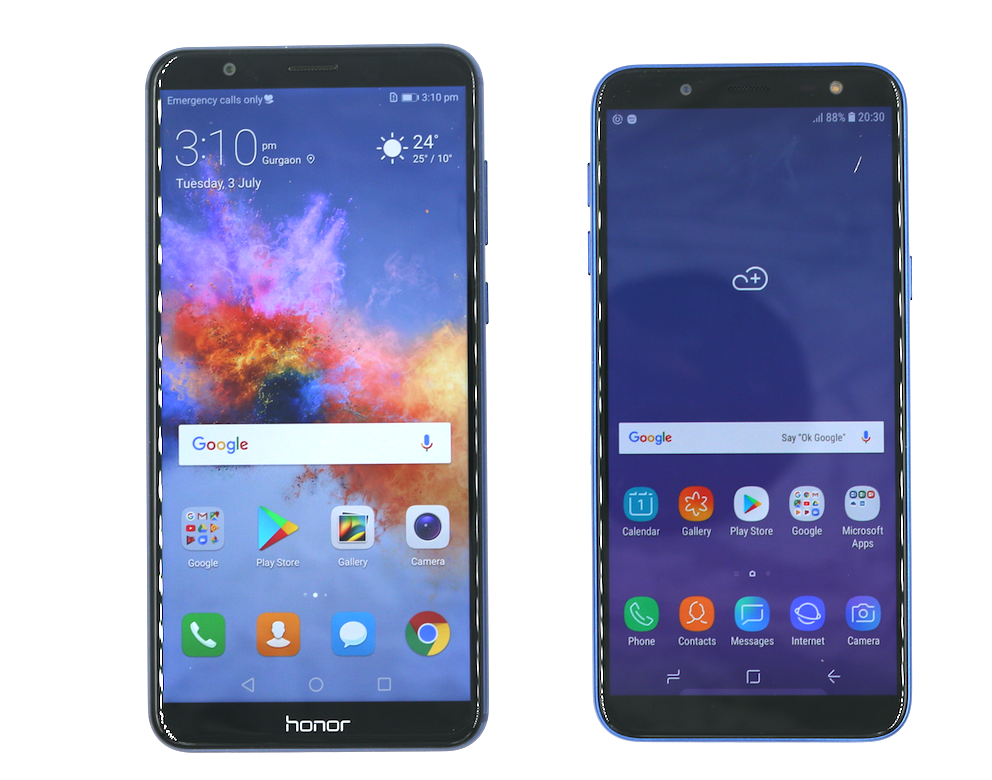 If you want a better screen with good pixel density and resolution, you should for the Honor 7X but if you want to have a Super AMOLED display, the Samsung Galaxy J6 should be your choice.

Coming to the camera, the Samsung Galaxy J6 comes with a single camera setup on the back of the phone. The sensor here is a 13MP f/1.9 sensor. There’s a single LED flash to support the main camera and it is able to take videos in 1080p at 30fps as well. You have an HDR mode as well in case you want to capture much more detail in a photo. The camera is just decent at best and doesn’t shoot very good images even in the daylight. If you want to buy the phone exclusively for the camera, you should read more about the Honor 7X’s camera below.

The front-facing selfie camera on the Samsung Galaxy J6 is an 8MP unit with an aperture of f/1.9. You also have a LED flash in case you want to shoot selfies in low light conditions. The selfie camera is also average. The low light performance is just OK and even with the LED flash, you won’t be able to get the desired photos from this phone. 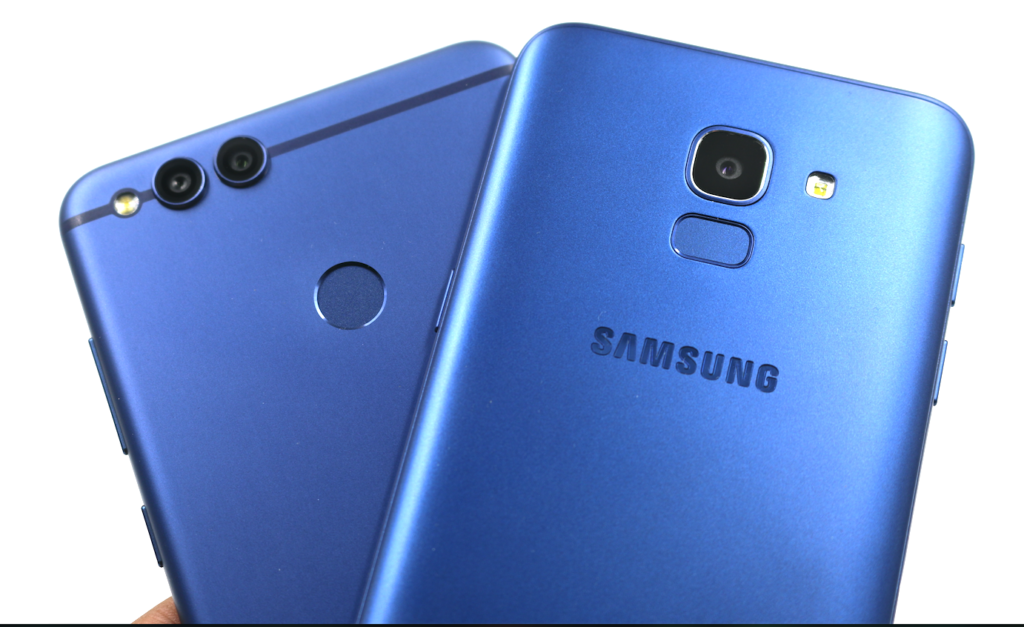 Talking about the Honor 7X and its camera, it has a dual camera setup at the back which has two different sensors. The first sensor is a 16 MP unit with an aperture of f/2.2 and the second sensor is a 2MP sensor to be used to capture depth. The dual camera setup is supported by a LED flash for darker surroundings. The photos come out to be better than what you see on the Samsung Galaxy J6 and you can even have portrait mode photos with this setup. The photos have a good amount of detail and the dynamic range is good too.

The Samsung Galaxy J6 came with Android 8.0 Oreo preloaded on it with Samsung’s own Experience 9.0 UI on top. The Experience UI brings a lot of software features on the phone like Chat Over Video, S-Bike mode etc. Other nifty features include the battery saver that works better than the default battery saver mode on Android and more.

The Honor 7X launched with Android 7.0 Nougat and now you can update the phone to Android 8.0 Oreo but just like Samsung Galaxy J6, Honor 7X’s OS has a skin on top of it called the EMUI. EMUI also brings a bunch of features. You can customize how the interface looks and apart from that, there’s also a single-handed mode which helps you use the phone just with one hand.

It is completely up to use to choose which custom skin you like better but if you are choosing any of the phones for the first time, you should keep in mind that they all have Android on their core so they have all the basic Android 8.0 Oreo features on there.

Coming to the performance, we need to compare the specifications of these phones. Both of them run on chipsets that have been manufactured by their parent companies. The Samsung Galaxy J6 runs on an Exynos chip that Samsung produces while Honor uses a Kirin chip that Huawei manufactures. Take a look at the table below. 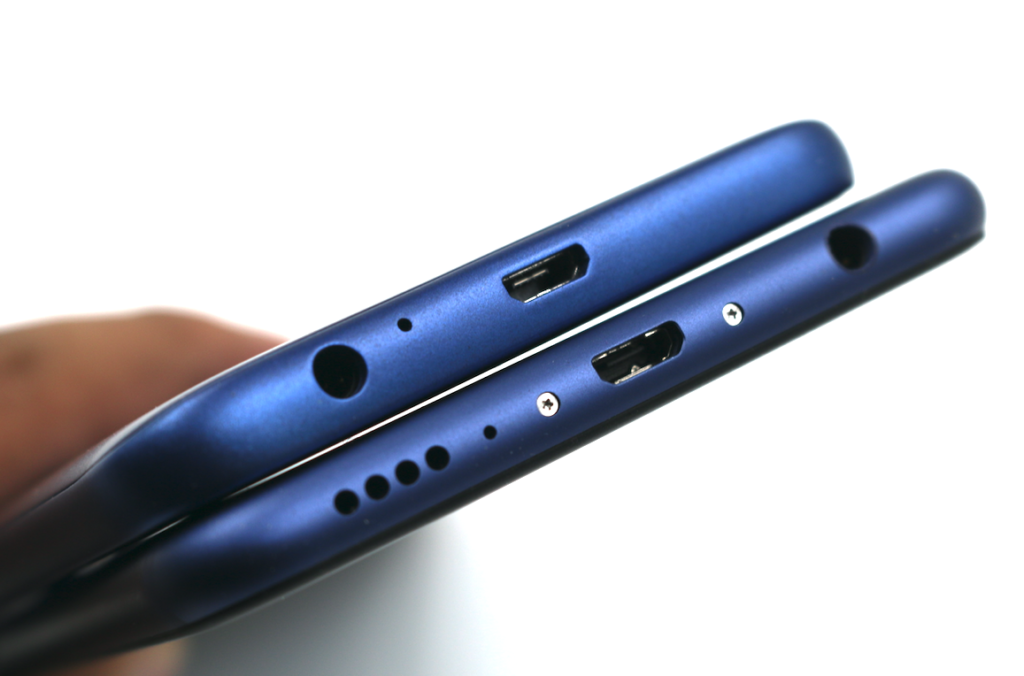 The Honor 7X performs really well and can handle apps well but that doesn’t mean Samsung Galaxy J6 is behind. You can use apps like WhatsApp and Instagram without any issues on the J6 but as soon as you start pushing the phone a bit further, you will start notice that the phone will slow down a bit with a few stutters.

Although the Samsung Galaxy J6 comes with a smaller 3000 mAh battery as compared to 3340 mAh battery present in Honor 7X, it is still the clear winner between the two and wins over the Honor 7X. The reasons for this victory is the display and the processor. The display on the J6 is a Super AMOLED 720p display which is used with darker backgrounds, will result in better battery life because the black pixels on the Super AMOLED display are turned off hence saving that power. One more reason is the screen resolution since the battery has to power lower number of pixels hence saving the battery.

The Honor 7X is a performance device that can capture photos slightly better than the Samsung Galaxy J6. 7X is overall a better smartphone but both of these phones have some good and bad things about them and you should evaluate how you’re going to use your smartphone and then make a choice. Choose the Galaxy J6 if you want something for media consumption with better battery life else go for the Honor 7X if you want better performance, better camera, and a higher resolution display.