Google Home Hub, Google’s display smart speaker, first debuted in October last year and at I/O 2019 was rechristened as the Google Nest Hub. Now the same device has made it to the Indian market.

Today Google India officially launched the Google Nest Hub in India with a price tag of INR9,999. The device is available to purchase via Flipkart, Tata Cliq, Croma, and Reliance Digital in Chalk and Charcoal color options.

Sweetening the deal, the Google is bundling out Xiaomi’s Mi Security Camera worth INR1,799 with the Nest Hub as a limited period offer available on Flipkart and Tata Cliq only.

The Google Nest Hub features a 7-inch touchscreen panel and wields a full-range speaker, two far-field microphones and an Ambient EQ light sensor to adjust the screen brightness according to the room lighting.

The Nest Hub supports Google Assistant voice commands and can control 200 million smart and IoT devices from more than 3,500 brands. 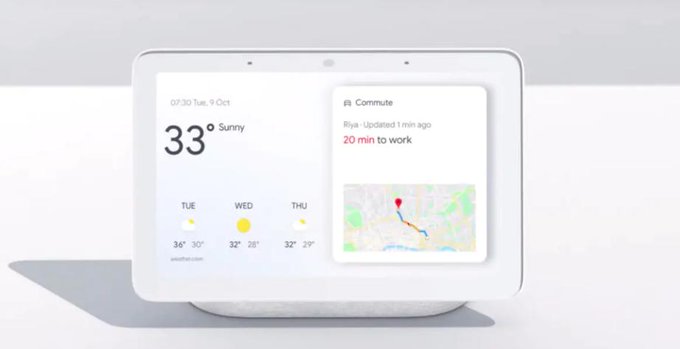 The design is somewhat similar to the Google Home. The Nest Hub has a speaker enclosed in a fabric meshed base upon which the display is mounted. The back also hosts volume controls and a switch to mute the microphone from listening. The front is devoid of a front-facing camera apparently to give users a peace of mind about the privacy.

Apart from Xiaomi, Google has partnered with Gaana for offering the entire catalog of music to Nest Hub users for free. Songs can also be played from YouTube Music, Saavn, Spotify, and Wynk. The device has an optimized YouTube video app, interactive recipes app and more.

One can watch the news from India Today, NDTV, Zoom, etc. with the facility of customizing news from specific channels only.

Another important feature the Google Nest Hub is integrated with is Google’s Digital Wellbeing to check and regulate how much time one spends on particular apps. The Filters feature works as parental controls letting the users block certain contents from being displayed on the screen.