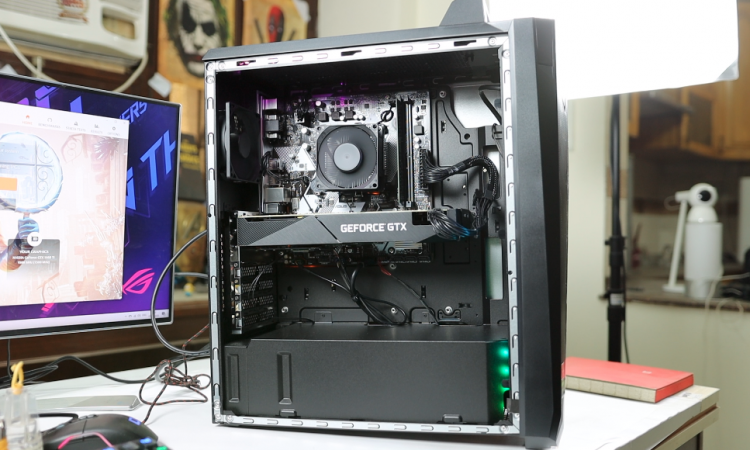 Launched back in CES 2020 the prebuilt gaming desktop, the ROG Strix GA15 has made its way to the Indian market along with ROG Strix GA35, a souped-up version of the former. The AMD Ryzen-powered ROG Strix GA15 is geared towards affordable mid-range gaming.

Although a mid-range product, this gaming desktop has a lot of things going for it that include a tasteful gaming look, competent specs, and practical features. But those aspects, more or less, are included in most of the desktops nowadays. So, it becomes imperative for us that we cast a critical eye on the device and let you know how it performs in real life. 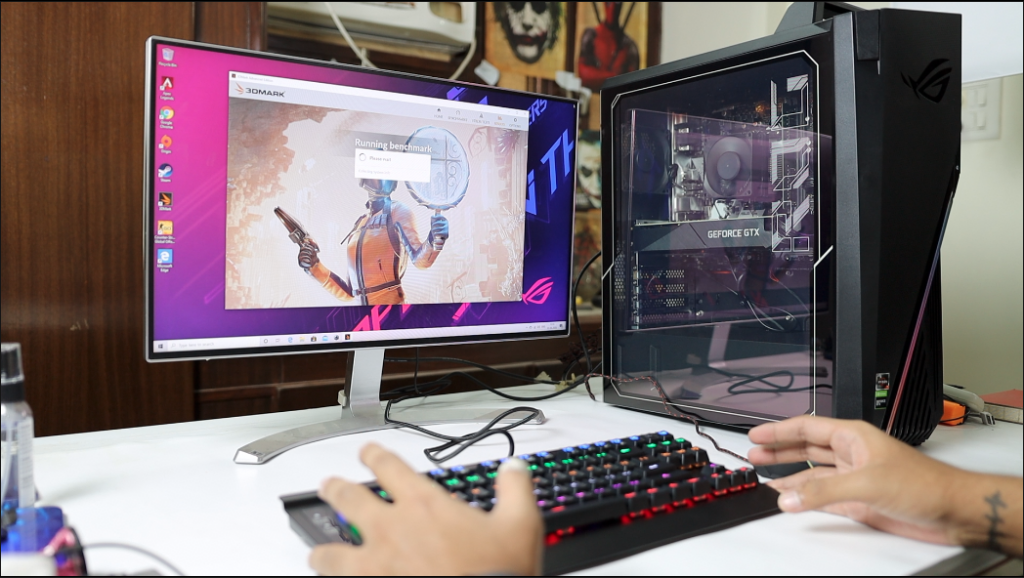 In that attempt here is our review of the ASUS ROG Strix GA15. And as to whether you should buy it or not you will find it out at the end of this article. So, read on.

The ROG Strix GA15 is powered by AMD Ryzen 7 3700X processor paired with NVIDIA GeForce GTX 1660Ti, and 16GB of DDR4 RAM running at 3200 MHz. The highest configuration for laptop goes up to 32GB DDR4-3200 RAM. The storage options include M.2-based NVMe SSDs up to 1TB which can be upgraded up to 2TB mechanical storage.

The ASUS ROG Strix GA15 comes with a starting price of INR65,990. However, depending on the configurations you choose prices will go up. 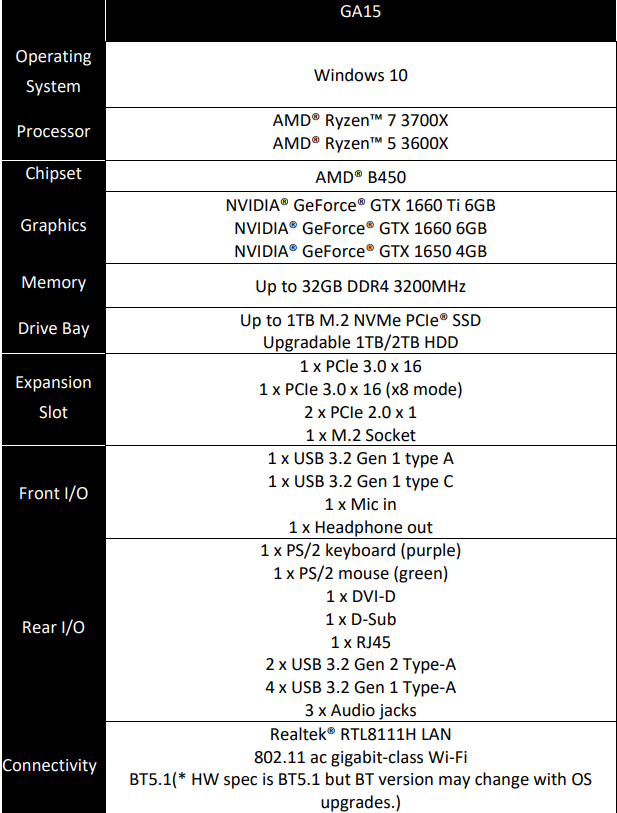 Upon unboxing, we found a power adapter, a SATA cable, and, of course, the ROG Strix GA15 desktop along with user manual and a warranty card- no freebies like a mouse or a keyboard, however.

Right off the bat the transparent glass on the entire left side of the case, allowing you a clear glimpse of inner components, will grab your attention along with a diagonally placed RGB LED light stripe on the front. Both these design elements add zing to the overall look of the desktop. Ample use of RBG lights both inside and outside enhances the aesthetics further. 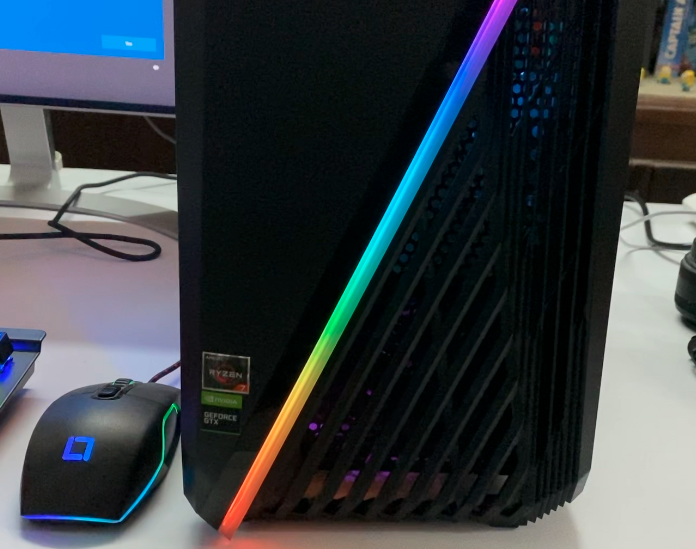 Besides the attractive design, the GA15 is aerodynamically designed with lots of vents on the front, top and the right side to keep the airflow at a maximum. The vents have a mesh-like pattern but there are no dust filters. Don’t mind wiping your device from time to time.

Although it has slimmer profile the desktop weighs 10 Kg. However, that is not a problem because ASUS has added a solid grab handle upfront to carry it around. This will come handy when you are going to any LAN parties or BYOC events. Another practical add-on is the retractable hook to hang your headphones. 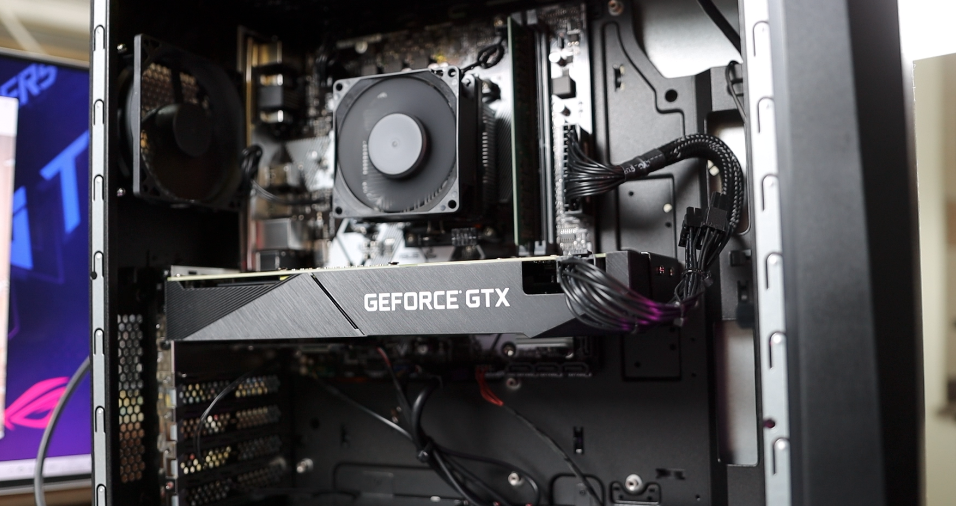 The ROG Strix GA15 comes with an array of ports. The front features two 3.5mm port each for headphone and mic along with a USB-A port and a USB-C port, the latter can also charge your phones quickly in emergencies.

The backside sports even a bigger block of ports meant for every purpose as it comprises HDMI port, display port, 3-in-1 audio jack, LAN port, Type-A ports, DVI port, D-Sub port, and PS-2 port. So, whether you are a gamer or a power user you are more than covered here. In terms of connectivity, the ROG Strix GA15 comes with 802.11 ac gigabit-class Wi-Fi, Bluetooth 5.1. Inside there is a Wi-Fi card slot as well. 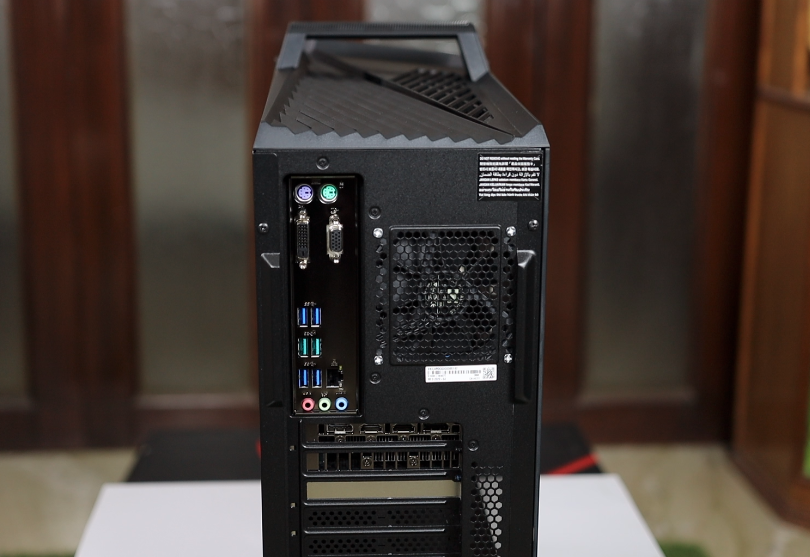 Not to mention, as this a preassembled desktop setting it up with the monitor, keyboard, and mouse is fairly easy. The GA-15 has Window 10 preinstalled which at the beginning will require some initial basic settings.

ASUS through its Armoury Crate application allows a lot of stuff to be customized especially the gaming. You can select from different modes such as Windows, Turbo, Performance, and Manual aimed at controlling the load on the internal components of the desktop while you play games. 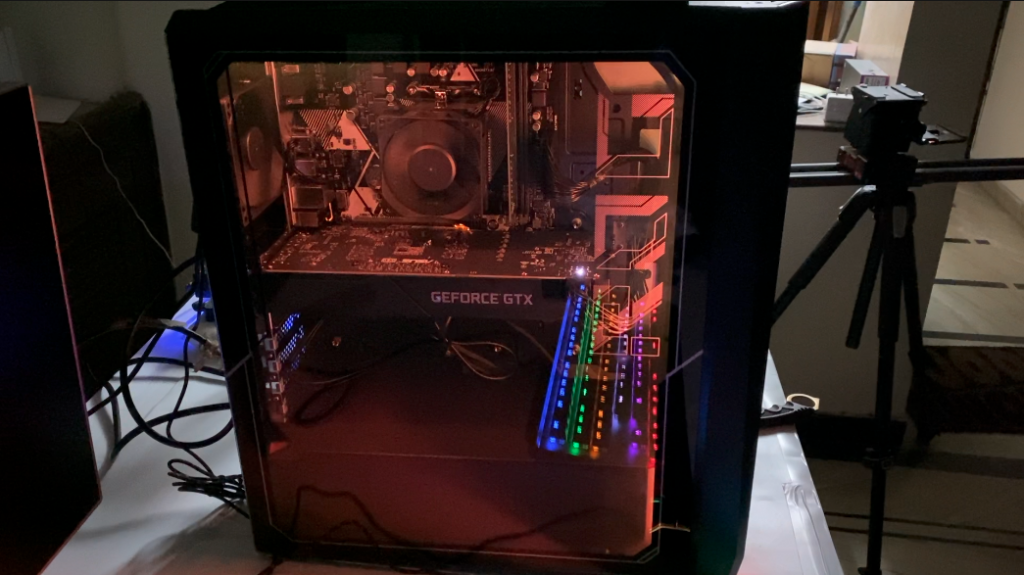 Also, one of the most interesting customizations you can get out of this app is controlling the lighting effects of the RGB lights. You can increase or decrease the brightness level and even can change the colors to please your eyes.

The Ryzen 7 3700X and GeForce GTX 1660Ti is fairly a good combination to play any games even at high settings. We played the CS GO which easily handled 200-250 fps while the Apex Legend played as smoothly, without encountering lags or major heating issues. 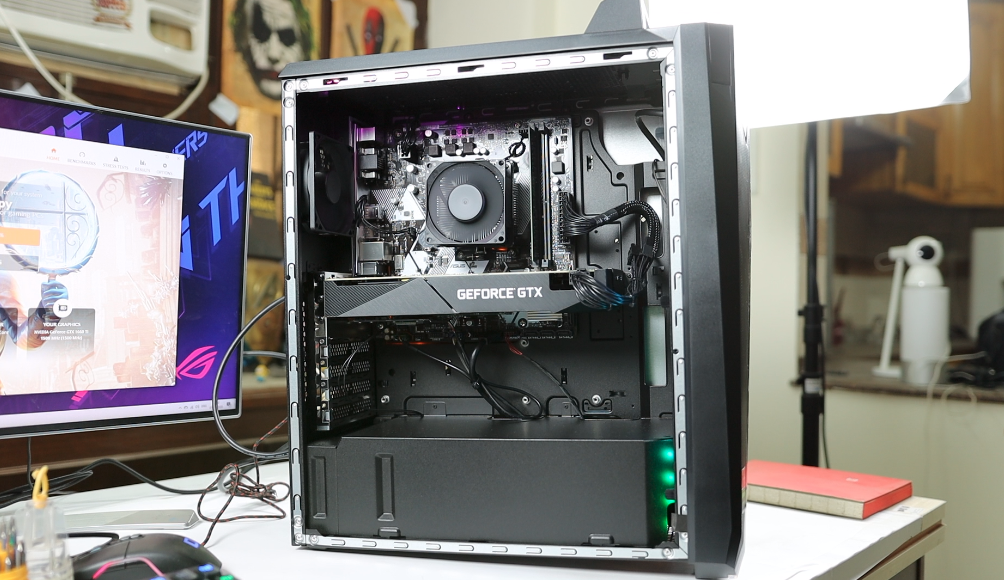 Airflow is well managed by the Wind Shear Chassis design as it lets copious air to flow into the desktop that takes away the heat of the components before exiting through an exhaust fan. To note, this is all managed without a dedicated intake fan.

Another laudable thing is that the desktop remains pretty calm. Even during playing games at high settings for log sessions the fan inside creates as little noise that the roof fan inside the room starts sounding noisier.

As for video editing, there was no complaint. We found it to be fast and smooth despite working through heavy editing apps. Multitasking with multiple windows opened simultaneously wasn’t a problem either thanks to the powerful processor and 16GB RAM even though the latter comes in a single stick form. Overall the ROG Strix A15 is a capable machine for handling everything thrown at it. 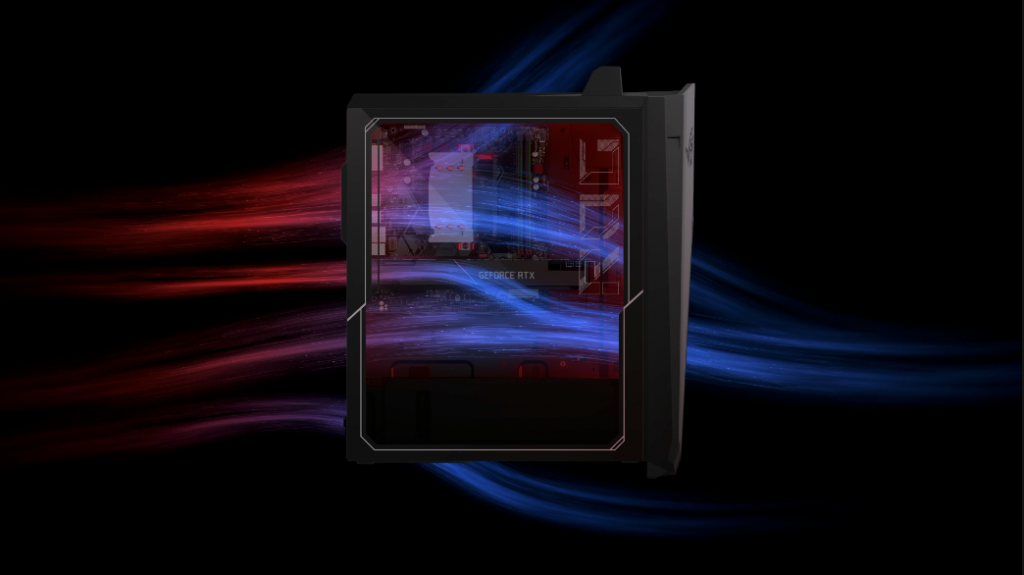 As stated earlier, the ASUS ROG Strix GA15 is beautifully designed desktop which comes with great features and a full range of functionality. Equally, we found out that it is swift and handles gaming or video editing quite competently.

Even so, we feel ASUS should have included an intake fan as well as a double-stick RAM to further boost the performance. But considering its mid-range orientation it is just our thought, not a complaint.

If you are into gaming or content creation sort of stuff, the ASUS ROG Strix GA15 offers right-out-of-the-box solutions for you at affordable price. We have no second thought in recommending it to you provided you select the right configuration befitting your requirement. 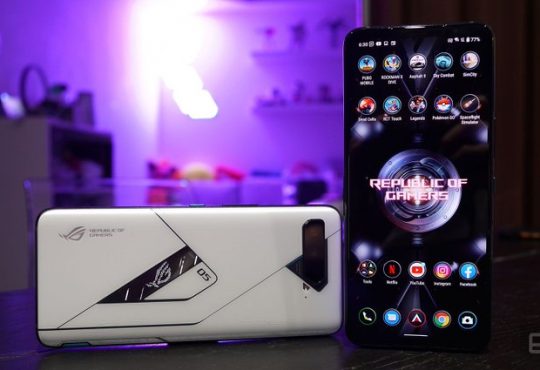